Argento, from Beginning to End 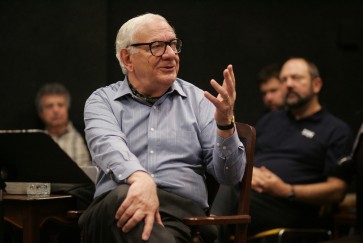 Dominick Argento during a master class at Eastman in October 2004.

Dominick Argento (PhD ‘58) has had a long, productive career as one of America’s best-known and most popular composers of music for the voice. That career began in the 1950s at Eastman, and continued through 14 operas and many vocal works that won him honors including a Pulitzer Prize and a Grammy Award. It will end this month with the premiere of his choral work Seasons by the St. Paul ensemble Vocalessence – a work which the 86-year-old Argento has declared will be his last composition.

By coincidence, October also saw Argento’s first vocal work, Ode to the West Wind, revived for its first performance since its 1957 premiere in Rochester, conducted by Howard Hanson and with Argento’s wife, the late soprano Carolyn Bailey, as soloist. Click here for a recent article by Michael Anthony in the Minneapolis Post about both performances.