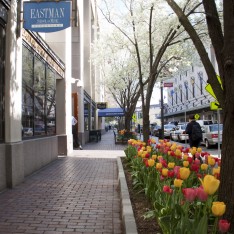 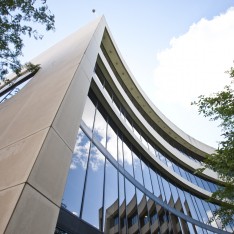 In September 2004, “Miller Center” became the new name for Eastman Place — the building located on Gibbs Street opposite the School’s Main Building. In a special ceremony, the Eastman School honored one of its most prominent alumni and one of Rochester’s most notable sons, the legendary Mitch Miller (BM ’32), and officially dedicated the building to the memory of Mr. Miller’s parents, Abram Calmen and Hinda Rosenblum Miller.

Miller Center is at the heart of much activity on Eastman’s Gibbs St. campus. The top three floors of the rectangular portion of the building house the Sibley Music Library (totaling 45,000 sq. ft.). The curved portion of the building houses four upper floors of office space, including Eastman’s Office of the Dean, and other administrative offices. The first floor holds restaurants and shops (including the Eastman School Bookstore), as well as the School’s Offices of Admissions, Registrar, Financial Aid, and Institute for Music Leadership. Miller Center’s spectacular atrium and outdoor public plaza provide gathering places for concerts, ceremonies, and informal meeting.