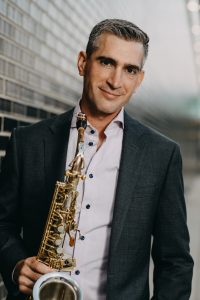 Saxophonist Doug O’Connor is passionate about sharing music that challenges audiences to explore, connect, and grow. His performances push the athletic limits of the saxophone and feature music from all eras and in many styles, including classical, contemporary, jazz, and electronic. He strives to champion new works, present adventurous and innovative chamber music, and perform with an improvisatory command of music from Bach to Coltrane.  O’Connor honed his artistic mission while performing on the Astral Artists roster from 2003 to 2013 and completing his training at the Eastman School of Music, where he earned his MM and DMA degrees in 2008 and 2012, and eventually went on to serve as Adjunct Assistant Professor of Saxophone in the fall of 2017. In addition, he served as Associate Lecturer of Saxophone at the University of Wisconsin in Eau Claire, as a saxophonist with the United States Naval Academy Band, and since 2016 as a saxophonist with the United States Army Band “Pershing’s Own.” He is proud to be a co-founder of the Global Premiere Consortium Commissioning Project, an online platform for instigating the composition, dissemination, and performance of new music worldwide.

“As for my time at Eastman, it was magical. For me this was a time of whirlwind intensity of musical and interpersonal connection, as I found the sense of community and tie between music and human relationships to be quite strong there. This felt especially strong – the sense of family – in Dr. Lin’s saxophone studio, and it has been inspiring to watch it continue to grow and develop. Even Dean Rossi found time to listen to, track concerts on, and stay in touch with students like myself. It is a powerful thing to move about in the post-college world, bump into folks that attended the same program, and have such an instant and powerful connection, a trust borne of shared experience and challenges. Finally, this is a place where lots of disparate and isolated skill sets grew and eventually connected, one informing the other: I matriculated behind the curve in music theory, for example, but thanks to Prof. Steve Laitz this topic eventually became a passion woven tightly into the way that I perform and experience music.”