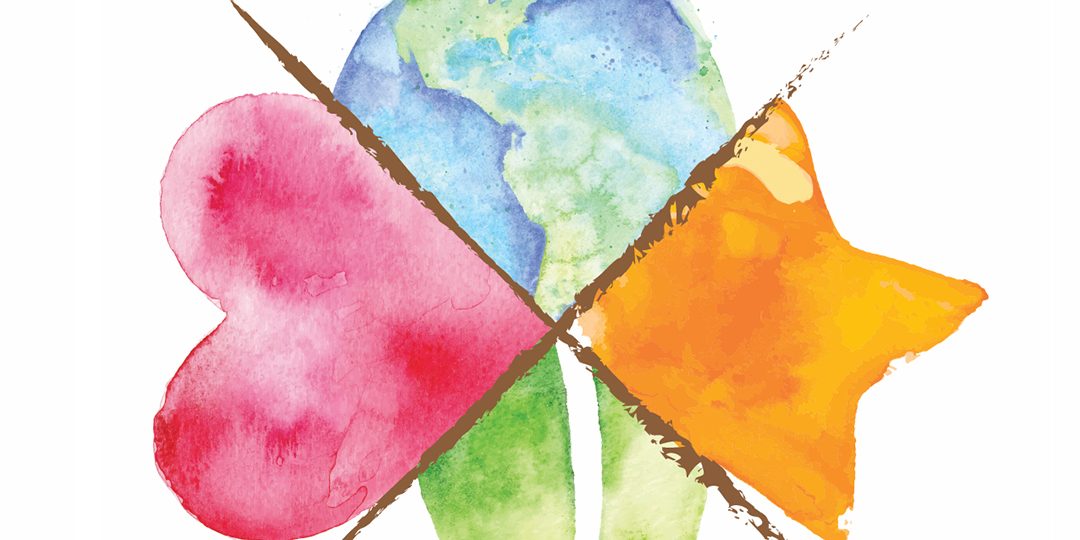 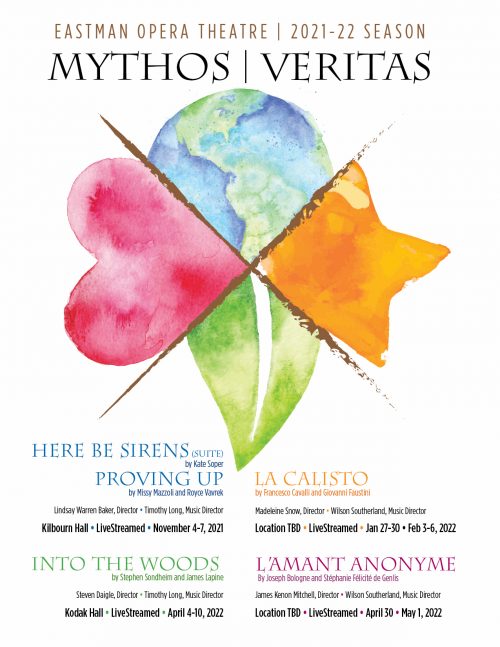 Eastman Opera Theatre is thrilled to announce its 2021-2022 season – representing Mythos and Veritas, meaning myth and truth. The season is a remarkably diverse lineup including: a double bill of music theatre works by Kate Soper and Missy Mazzoli; the baroque opera La Calisto by Francesco Cavalli; Stephen Sondheim’s popular musical Into the Woods; and L’Amant Anonyme, an opera by a composer known in 18th-century Paris as “The Black Mozart” – Joseph Bologne, the Chavalier de Saint-Georges. This season also includes the postponed (virtual) production of Postcard from Morocco by Eastman alumnus Dominick Argento ‘58E (PhD) and John Donahue.

“As we return to live performances, Eastman Opera Theatre continues its charge to deliver thought-provoking and relevant lyric theater that prepares Eastman voice students for the professional world and engages audiences.”  shares Steven Daigle, co-chair of the Voice and Opera Department, and Director of Eastman Opera Theatre (EOT). “The 2021 – 2022 EOT season contains an all-encompassing repertoire, ranging from the early baroque to contemporary opera and the Broadway musical. EOT has made a commitment to heighten awareness and the inclusion of BIPOC and women composer representation in our mainstage repertoire. Along with this, we are continuing discussions and dialogue with the voice students and faculty addressing the inherent biases in opera and the social responsibilities of a present-day lyric theater performer.”

“Eastman Opera Theatre’s 2021-2022 season is one of metamorphosis.” Says Timothy Long, Associate Professor of Opera. “Spanning 316 years, our repertoire presents stories of temptation, aspiration, destiny, love, and change. I am reminded of Ovid’s line, ‘I intend to speak of forms changed into new entities’ and I think our audiences will connect deeply with these great pieces.”

Launching the season, Here Be Sirens (Suite) and Proving Up will be presented as a double-bill in Kilbourn Hall (November 4-7), directed by Lindsay Baker, Instructor of Opera of Eastman Opera Theatre. Baker describes the double bill of works by contemporary American female composers as “some of the best of what’s new in opera today. In Kate Soper’s Here Be Sirens (Suite) (2014), three mythological Sirens lure sailors to their doom through song. Missy Mazzoli’s Proving Up (2018) tells of one family’s attempt to fulfill the American Dream by homesteading land in 1860s Nebraska.” Both works have haunting, unique sound worlds, Baker explains: “In the Sirens Suite, singers accompany themselves on a prepared piano, and the chamber orchestra of Proving Up features harmonicas and seven acoustic guitars.”

La Calisto will be the January production (January 29-30 and February 3-6), directed by Madeleine Snow, an Eastman Directing Master of Music Candidate.

“Full of mischief, irreverence, and outrageous flirtation, this Baroque opera is inspired by the myth of Callisto in Ovid’s Metamorphoses and explores themes of gender, sex, love, power, feminism, greed, mortality, and morality,” says Madeleine Snow. “Giove, king of the gods, is rebuffed by the naïve young nymph Calisto, an attendant to Diana, goddess of chastity, whom Calisto loves. With the help of his aide Mercurio, Giove disguises himself as Diana to seduce Calisto. Diana simultaneously falls in love with the peasant shepherd Endimione. Neither Calisto nor Endimione can tell the difference between the real and disguised Diana, so hilarity, confusion, and drama ensue.”

The spring 2021-2022 productions are remarkably contrasted: Stephen Sondheim’s Into The Woods, with a book by James Lapine (April 7-10, Kodak Hall); and L’Amant Anonyme (May Production), one of several operas with music by le Mozart noir (“The Black Mozart”), the remarkably talented violinist and composer Joseph Bologne, Chevalier de Saint-Georges.

“Stephen Sondheim and James Lapine’s masterpiece weaves an original story around classic fairytale characters, twisting their own happy ending stories into a realistic fable of life’s challenges,” says director Steven Daigle. “Numerous themes in this musical are relevant to today’s social and political climate today,” he goes on. “There is an overall warning found within the story: Those who serve as teachers (parents, educators, etc.) have the responsibility to prepare the next generation to successfully navigate ‘the woods’. It’s a delicate balance of teaching self-determination, offering protection, and being honest.”

The illustrious 18th-century composer of color Joseph Bologne, Chevalier de Saint-Georges was an accomplished composer, virtuoso violinist, conductor, and swordsman. L’amant Anonyme (The Anonymous Lover), to be presented in May, is his only surviving opera.  According to director James Mitchell, a masters degree candidate, the opera, “presents a charming tale of love and hidden identity” within a romantic triangle. “Following Saint-Georges’s death,” Mitchell explains, “his impressive body of work fell largely into obscurity and his five other operas were lost. This production of L’amant Anonyme provides an opportunity to experience the beauty of Saint-Georges’s masterful writing and to work against the anonymity thrust upon his work by centuries of systemic racism.”