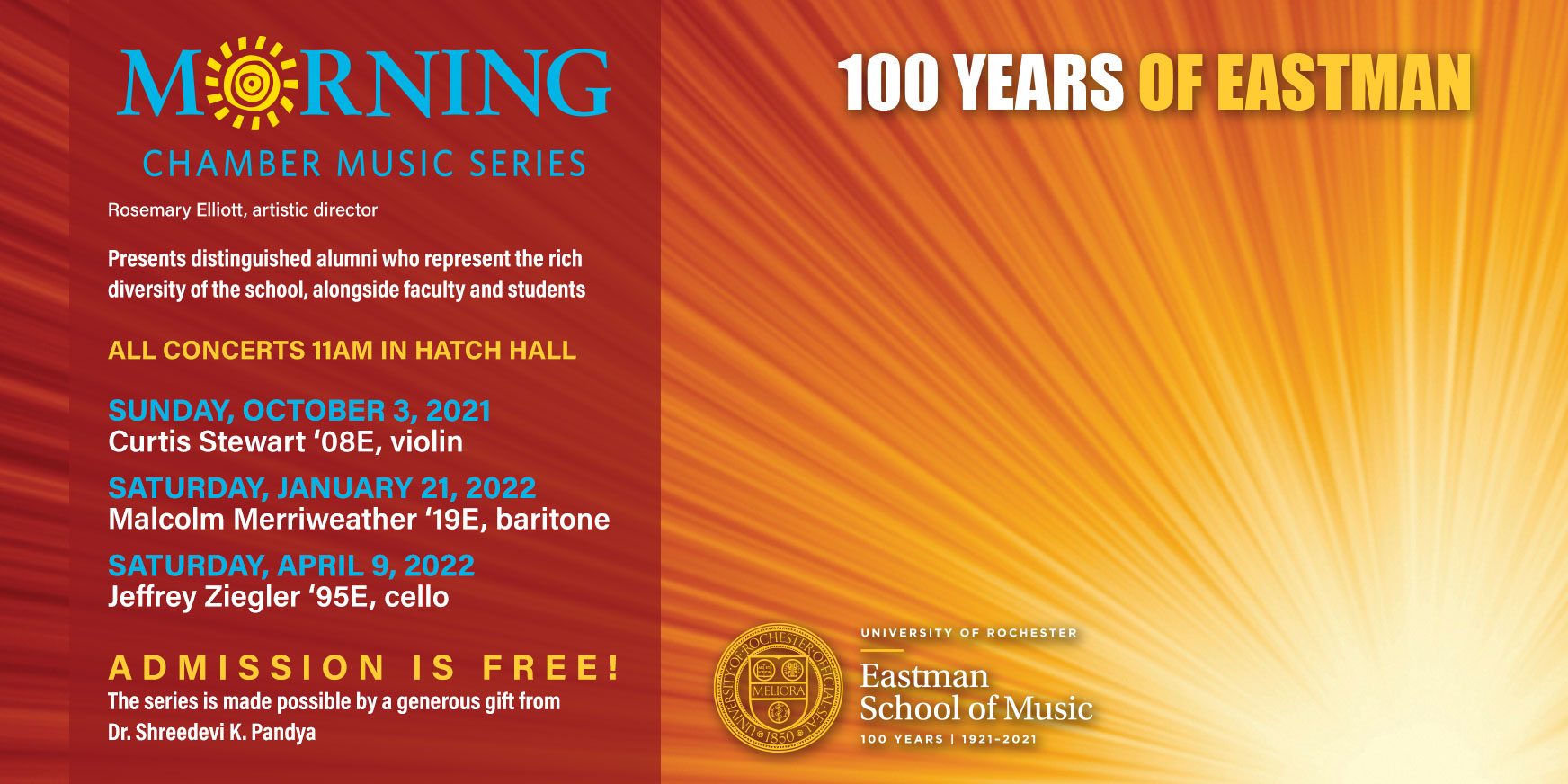 All performances will take place at 11 a.m. in Hatch Recital Hall at the Eastman School of Music. Dates and featured alumni are listed below:

“I’ve wanted to include alumni in the Morning Chamber Music series for a long time. This year, distinguished alumni will join the nationally and internationally recognized chamber musicians on our current string faculty,” says Rosemary Elliott, director of this series. “Many of our students go on to have successful careers combining chamber music, teaching and performances in larger ensembles. Having alumni join us for this collaborative experience will provide great inspiration for our current students.”

The three alumni guests will establish a mini residency at Eastman during the week of their performances. They will engage with students through their shared performances and will also give classes and presentations to the student body as a whole.

This series is made possible by a generous gift from Dr. Shreedevi K. Pandya.

Curtis has performed as a classical soloist at Lincoln Center, and Carnegie Hall, made chamber music appearances at the Metropolitan Museum of Art, with the New York Philharmonic, and the Newport Jazz Festival. An avid teacher, Curtis is on the faculty of the Juilliard School, teaching Chamber Music and “Cultural Equity and Performance Practice,” He directed the Contemporary Chamber Music program at the Perlman Music Program, directed several orchestras and all levels of music theory at the Laguardia High School for Music & Art and Performing Arts for ten years, and is currently the Chamber Music and New Juilliard Ensemble Manager at the Juilliard School. Curtis graduated magna cum laude from the Eastman School of Music with a BA of Mathematics from the University of Rochester.

Conductor and baritone, Malcolm J. Merriweather enjoys a versatile career with performances ranging from the songs of Margaret Bonds to gems of the symphonic choral repertoire. The baritone can be heard on the GRAMMY nominated recording of Paul Moravec’s Sanctuary Road (NAXOS). Hailed by Opera News as “moving…expertly interpreted,” his recording of Margaret Bonds’ The Ballad of the Brown King & Selected Songs (AVIE) has earned considerable praise around the world.

He is Music Director of New York City’s The Dessoff Choirs, known for their performances of great choral works from the pre-Baroque era through the 21st century. He is an Associate Professor, Director of Choral Studies and Voice Department Coordinator at Brooklyn College of the City University of New York, and the Artistic Director of “Voices of Haiti,” a 60-member children’s choir in Port-au-Prince, Haiti, operated by the Andrea Bocelli Foundation. To read more visit: http://malcolmjmerriweather.com/biography/

Jeffrey Zeigler is one of the most innovative and versatile cellists of our time. He has been described as “fiery”, and a player who performs “with unforced simplicity and beauty of tone” by the New York Times. Acclaimed for his independent streak, Zeigler has commissioned dozens of works, and is admired as a potent collaborator and unique improviser. As a member of the Kronos Quartet, he is the recipient of the Avery Fisher Prize, the Polar Music Prize, the President’s Merit Award from the National Academy of Recorded Arts (Grammys), the Chamber Music America National Service Award and The Asia Society’s Cultural Achievement Award.

This Fall, Zeigler will release his next album, Houses of Zodiac: Poems for Cello with music by Paola Prestini. It will be a multimedia experience that combines spoken word, movement, music, and imagery into a unified exploration of love, loss, trauma, and healing. The project takes its title from the twelve houses of the zodiac as facets of the self and draws inspiration from explorations of the subconscious including Anaïs Nin’s House of Incest and the poetry of Pablo Neruda, Brenda Shaughnessy, and Natasha Trethewey. Filmed by Murat Eyüboglu at MASS MoCA and Studio Polygons in Tokyo, Japan, the digital experience will feature the performances and original choreography of New York City Ballet soloist Georgina Pazcoguin and Butoh dancer Dai Matsuoka, a member of the acclaimed Butoh troupe Sankai Juku. To read more visit:  http://www.jzcello.com/about