Allen Vizzutti Returns to Eastman on a “River of Light” 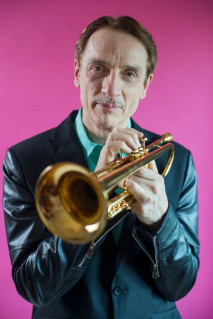 On Monday, September 13, at 7:30 p.m. in Kodak Hall, the Eastman Wind Ensemble (EWE), under its director Mark Davis Scatterday, will present the world premiere of Allen Vizzutti’s (‘74, ‘76 MM) centennial commission River of Light, and also the world premiere of his Quasar, with Vizzutti as trumpet soloist.

American trumpeter, composer, and music educator Allen Vizzutti earned bachelor’s and master’s degrees, a Performer’s Certificate, and an Artist’s Diploma from Eastman. At home in a multitude of musical idioms, he has visited 40 countries and every state to perform with artists and ensembles including Chick Corea, “Doc” Severinsen, Woody Herman, Japan’s NHK Orchestra and New Tokyo Philharmonic, Saint Paul Chamber Orchestra, and many others. He is heard on more than 100 movie soundtracks, including Back to the Future and Star Trek.

Can you describe both of the pieces to be performed on September 13? What do the titles signify?

The River of Light was the result of Dr. Mark Scatterday’s request for a new piece for a small mixed ensemble of my choice.  The original parameters were COVID dictated based on social distancing and other challenges of which we are all acutely aware. It was decided that I would not be able to attend the premier and perform – again, because of COVID.

I asked Mark if he had any preferences for the new piece and he suggested a “crossover” work. Although that’s a very broad concept I ran with it. Having a lot of experience playing and composing in multiple styles and genres, I decided to use a contemporary “fusion” approach for the jazz/rock portion of the piece including improvised solos. The music bookending the work is contrapuntal writing over a colorful pedal texture, creating two contrasting components.

The orchestration requires most of the players to leave their classical comfort zone and join the “dark side”, playing jazz fusion lines.

Was my writing influenced by knowing Mark and the EWE were going to play the new work? Absolutely!  I make every effort to write correctly and wisely for each and every instrument and to a level that will work as well as possible in a particular setting. In this case that means I wrote whatever I wanted. So the music is tough, but I think it’s fun for the ensemble.

The title, River of Light, refers to a recent time when someone I love went through cancer treatment (they are doing fine now). A kind and wonderful family member suggested that this person imagine floating on a River of Light during radiation treatments. It helped. I loved the image and used it here.

When the COVID restrictions changed and I was asked to come to ESM for the concert and perform with the ensemble, I asked Mark if I could write and perform another new piece for full EWE and trumpet solo, since River of Light is not a solo trumpet work. The result is Quasar. I wrote the music before having a title. When I read a definition of a quasar, I was immediately struck by the parallel description with the piece I had just written:

Quasar: a massive and extremely remote celestial object, emitting exceptionally large amounts of energy, and typically having a starlike image.

I decided a long time ago that when I compose, at least one of the following three characteristics should always be present: the music should be interesting, exciting, and/or beautiful. I hope I accomplished that with Quasar.

I did play in EWE under Dr. Hunsberger and EJE under Ray Wright and Chuck Mangione. Dr. Hunsberger was a legend even back then. The ensembles were really good and the music very challenging, as was the schedule of concerts and rehearsal. Dr. Hunsberger was a very important part of my education. I learned so much from his rehearsal techniques, his recording production, and musical interpretations. He was very serious about our work yet maintained an element of fun which I got to know even better after I returned to join him, the EWE, and [then] doctoral grad student Mark Scatterday on a tour of Japan.

I often cite Rayburn Wright as my most important professor at Eastman. We had an enduring friendship until his brain tumor took him from us far too early. He taught us the nuts and bolts of arranging, production, film scoring, and studio recording. He encouraged vast creative ideas and experimentation, all the while drilling in the absolute importance of practical skills. Ray taught us taking shortcuts in writing or production could result in ruin. 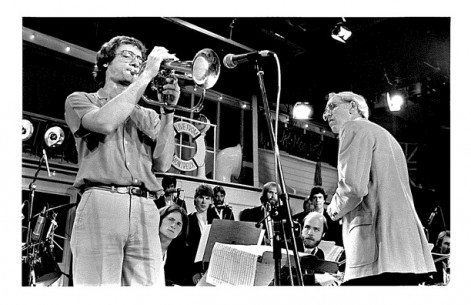 Allen with Ray Wright and the EJE at Montreux Jazz Festival, 1982

Six months after leaving Eastman, I played first trumpet on a live Woody Herman 40th anniversary concert recording in Carnegie Hall. My EJE experience got me through it.  When I played my first motion picture recording session in Los Angeles, I felt very comfortable thanks to Ray and the Eastman Studio Orchestra experience. When the great Jeff Tyzik ’73E, ’77E (MM)  and I are producing projects together we often ask ourselves, “What would Ray Wright do?”.

I know you have visited Eastman many times since your graduation, but how does it feel to be returning in the first big concert of our centennial celebration?

I am thrilled to be returning to Rochester and ESM for this centennial event. I still feel a real connection to Rochester, its wonderful audiences, the RPO, many friends and of course ESM. I feel at home in the Eastman Theater because of all my pleasant experiences there. Who wouldn’t want a composition performed by one of the best wind ensembles in the world? Let alone two pieces.

How did the pandemic affect your work?

The pandemic wiped out my international performance and touring schedule starting March 11, 2020. I was on the way to a dress rehearsal of a concerto with orchestra and received a text. I flew home that afternoon. Since that day I have only performed and presented online, continued to write, produced social media content – mostly Instagram – and taught a bit via Zoom.

What projects are you planning, such as performances, recordings, or publications?

I’m working on a more productive online presence and have a 30-minute EP I’m about to mix. I am working on a new trumpet book and solo literature, which will be available with earlier works at vizzutti.com. New play-along duets are available also, which I recently recorded.

The pandemic has afforded me the time to write solo literature for piano too. I finished a 15-minute solo piece called Synapse 1,2,3,4 and … ahem … a 30-minute piano concerto in four movements with symphony orchestra. This Eastman concert is my first live performance since the pandemic hit.

Within the guidelines for health and safety due to COVID 19, I hope you will all attend the concert or join us online for the stream. (See the information below.) It is important that we continue to support music education at all grade levels during this challenging time. We need to create and support as much art and beauty as we can muster for the good of us all.

The Eastman Wind Ensemble and guest Allen Vizzutti perform his River of Light and Quasar on Monday, September 13, at 7:30 p.m. in Kodak Hall. The program also includes Howard Hanson and Mark Scatterday’s Centennial Fanfare No.2 and From a Dark Millennium by Joseph Schwantner.

Admission is free and the concert will be livestreamed; go to https://www.esm.rochester.edu/live/

15 minutes before the event.