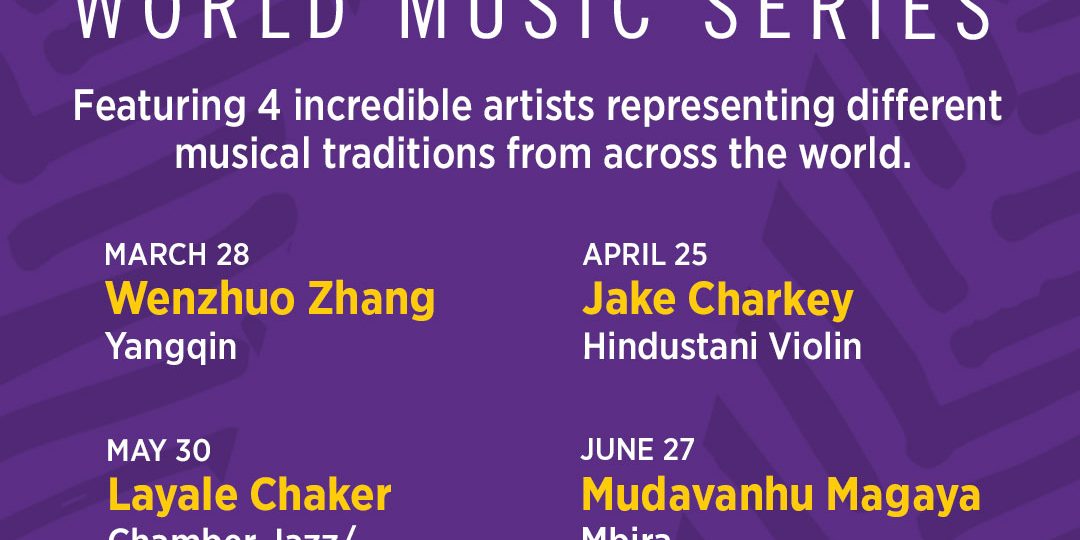 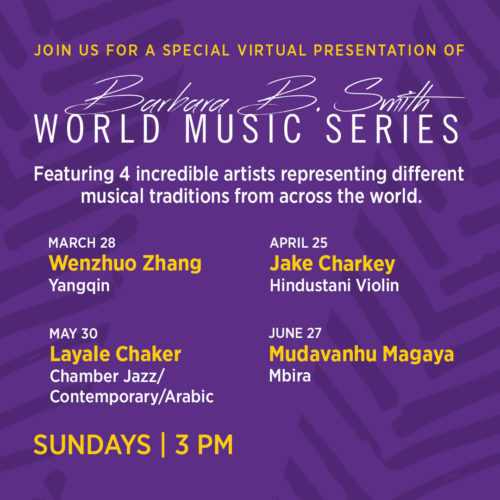 Eastman School of Music, University of Rochester, brings back the popular Barbara B. Smith World Music Series in a set of free virtual concerts this spring. Sponsored by Eastman’s Ethnomusicology program, part of the department of Musicology, four incredible guest artists representing different musical traditions from across the world will be streamed, with LIVE Q&A sessions to follow on https://www.esm.rochester.edu/live/

Concerts will be held the last Sunday of the month, all at 3PM EST, starting in March:

“At a time when travel is difficult, I am excited to be virtually hosting this incredible array of musical artists from across the globe,” says Assistant Professor of Ethnomusicology, Anaar Desai-Stephens. “Despite the pandemic, technology makes it possible for us to continue to forge musical connections between artists and audiences across distance and time zones. Equally importantly, we are delighted to support musicians in a moment when live performance continues to be nearly impossible, with the generous backing of Barbara B. Smith.”

Deemed a “Rising Star” by BBC Music Magazine, violinist and composer Layale Chaker debuted her musical training at the National Higher Conservatory of Beirut in her native Lebanon. She later went on to pursue her studies at Conservatoire Regional de Paris and the Royal Academy of Music in London.

Layale’s musical world lies at the intersection of classical contemporary music, Jazz, Arabic Music, and improvisation. As a violinist and composer, she has received commissions and presented performances and projects around Europe, the Middle-East, North and South America and Asia. Her debut album with her ensemble Sarafand, “Inner Rhyme”, recipient of the AFAC 2018 fund, is dedicated to the sounds, rhythms, rhymes, shapes and forms of Arabic poetry. The album was released on In a Circle Records, and listed as “Top of The World” by Songlines with a five-star review, rated #2 on NPR 10 Best Releases, #1 for several weeks on the World Charts of iTunes and Amazon Music, and has received praises from the BBC Music Magazine, The New York Times, The Strad, Strings Magazine, and Jazz World, among others.

A winner of the Silkroad Seeds inaugural 2020 award and a Nadia et Lili Boulanger 2019 laureate, Layale is also a finalist of the Rolex Mentor & Protege 2018 Prize, the recipient of the Diaphonique Franco-British Commission Prize 2019, the 2018 Arab Fund for Arts and Culture Grant, the Royal Academy of Music 2018 Guinness Award, and the winner of the Ruth Anderson 2017 Competition.

Jake Charkey is an acclaimed cellist with a strong background in Western classical music (at Rice University’s Shepherd School of Music) and Hindustani music. He is also an eclectic improviser, drawing from his extensive training in Eastern and Western musical traditions. He recorded and performed with many of the most celebrated musicians in Bollywood, and he is a sought-after studio recording artist in India and the United States.

Mudavanhu Magaya (“Muda”) was born in Hwange, Zimbabwe and is the only son of the mbira master Cosmas Magaya. Muda, a great mbira player in his own right, developed an interest in playing mbira at a very young age. He started by just observing his father and then trying to play. After seeing his determination, Cosmas decided to train him formally. Muda received training from his father for close to a three-decade period. He is currently the primary mbira teacher at the Humwe Cultural Center in Mhondoro, Zimbabwe and has taught many foreign students who have travelled to Zimbabwe to study the music and culture. He is a highly sought-after mbira player in the Mhondoro area in Zimbabwe. Over the past two decades, he has regularly performed at ceremonies with his father and has recorded several albums that are available in the United States through the MBIRA label.

A native Chinese, Wenzhuo Zhang ‘20E (MA), began her training on the yangqin (Chinese hammered dulcimer) at the age of five. When she was thirteen, she was given a full scholarship to the highly competitive Arts School of He Bei Province, which accepted only one yang qin student every two years. After graduation, she placed first in the Chinese national auditions and was admitted into the National Academy of Chinese Theatre Arts in Beijing, where she was awarded her Bachelor’s in yang qin performance in 2005.  After Wenzhuo was awarded her Doctorate from Boston University in music education in 2015, she studied Ethnomusicology at Eastman from 2017 to 2019.

As a performer, Wenzhuo has performed with Chinese orchestras, Silk and Bamboo ensembles, Peking opera orchestras, as well as Western wind ensembles. She has given a series of lecture-recitals in China and the United States. Wenzhuo has also earned many performance-related awards, including the Gold Medal in Beijing-National Youth Arts Professional Competition, the Silver Medal in the second New Orient-National yang qin Competition, and first place in the International Hammered-Dulcimer Championship in the United States. As a scholar with a dual interest in ethnomusicology and music education, Wenzhuo has published journal articles in China and the United States and has presented at international and national conferences.

“As an Eastman alumna,” says Wenzhuo Zhang, “it is my pleasure to share my expertise and my knowledge on Chinese traditional music with the Eastman community.”

The concert series is generously funded by, and part of, the Barbara B. Smith World Music Series.

These performances will be livestreamed at: https://www.esm.rochester.edu/live/