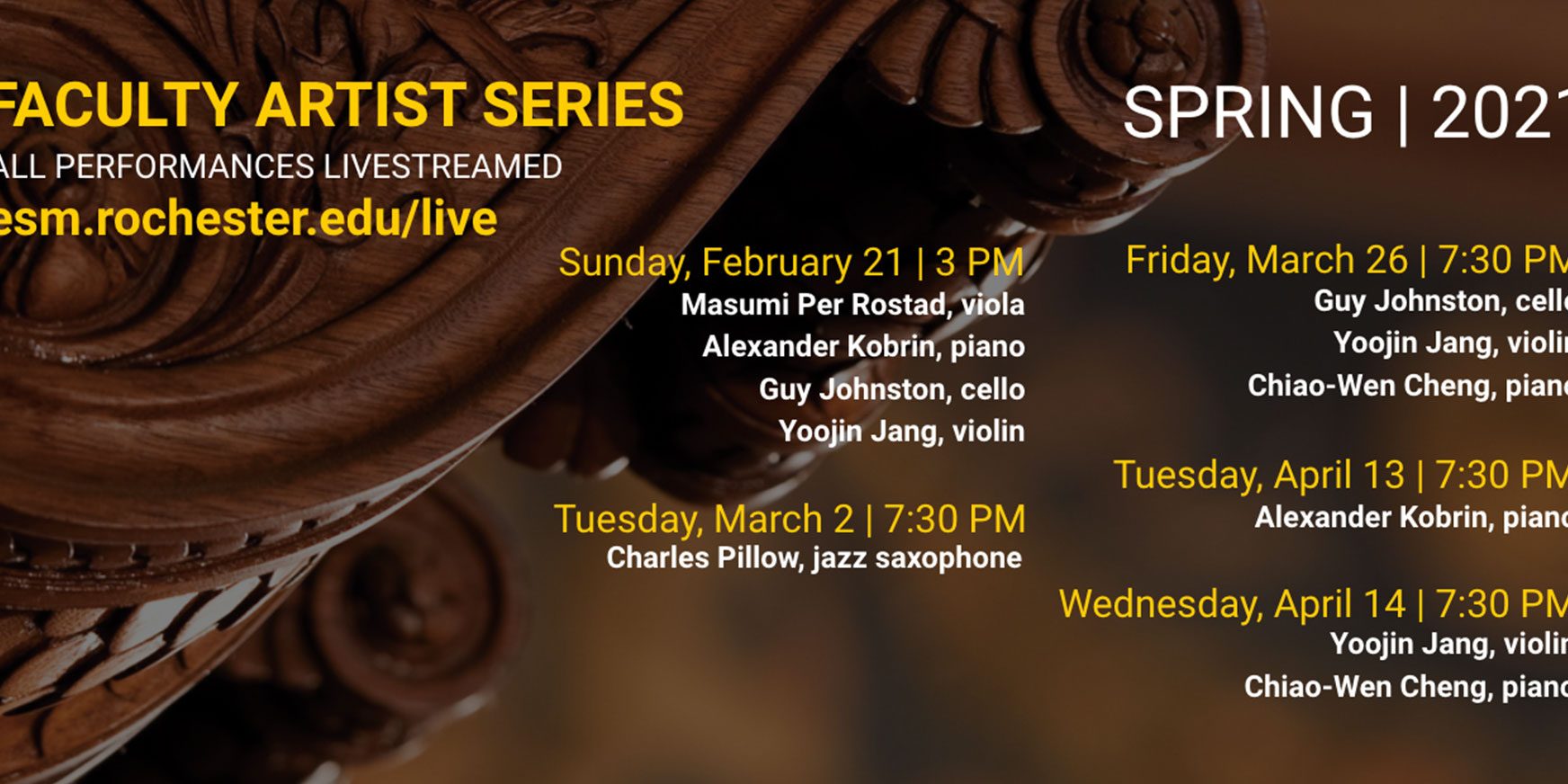 A fluent performer, educator, and touring musician, Charles Pillow has appeared on over 100 CDs of jazz and pop artists such as Brad Mehldau, John Scofield, Michael Brecker, David Liebman, David Sanborn, Jay Z, Paul Simon, Tom Harrell, Joe Henderson, Maria Schneider, and Bob Mintzer. In addition to his teaching at the Eastman School of Music, he gives masterclasses throughout the United States and abroad.

With seven recordings to his credit, Pillow has established himself as one of the premier woodwind instrumentalists and saxophonists of the day. His recordings include Electric Miles (2018 on MAMA Records) with his large ensemble, featuring the music of Miles Davis, which was a top 10 critics pick; Triocity (2017 on Originarts) with fellow Eastman instructors Jeff Campbell and Rich Thompson; Van Gogh Letters (2010 on ELCM Records) featuring Eastman instructor Gary Versace; The Planets and Pictures at an Exhibition, both on Artistshare; In this World (2001 on Summit Records); and Currents (1996 on Challenge Records).

Jeff Campbell has carved out an impressive career as bass player of extraordinary artistry, fluent in both the jazz and classical idioms. As a jazz bassist, he maintains an active schedule performing with Gene Bertoncini, Rich Perry, Trio East, Harold Jones, and the Eastman Jazz Quartet featuring Harold Danko; he also performed with Marian McPartland and appeared on McPartland’s National Public Radio program Piano Jazz. In demand across the globe, Jeff has performed at the Nice, Montreux, North Sea, Riga, and Parnu Jazz Festivals, and in the former Soviet Union and the Baltic Republics. His first CD, West End Avenue with John Hollenbeck and John Wojceichowski, features a combination of original compositions and jazz standards. Jeff is a member of the Rochester Philharmonic Orchestra bass section. A full-time professor at Eastman since 1997, his summers are occupied as program director of the Birch Creek Music Performance Center in Door County, Wisconsin, and as co-director of the Eastman Summer Jazz Studies and Bass Day.

Before joining the Eastman faculty in 1997, Bob Sneider toured for several years with two-time Grammy Award winner Chuck Mangione. He has performed, toured, or recorded with Nat Adderley, Joe Locke, Don Menza, Lou Donaldson, Joey Defrancesco, Pat Bianchi, Gary Versace, and Pat Labarbara; made frequent appearances with the Rochester Philharmonic Orchestra Pops (guitar/banjo); and has performed in major festivals, concert halls and jazz clubs throughout South America, Central America, North America, and Europe. Sneider is a graduate of the University of Rochester, where he studied with Bill Dobbins and Ramon Ricker.  Sneider’s solo and co-led CD projects have received rave reviews and international airplay: the self-produced Introducing Bob Sneider; Out of the Darkness, and duo projects with pianist Paul Hofmann  Interconnection, and Escapade (SonsofSound); Serve & Volley (Origin); and The Bob Sneider/Joe Locke Film Noir Project, including Fallen Angel (Sonsofsound), Nocturne for Ava (Origin), and All Through The Night (RIJF). Several of his students have won major jazz competitions and have attended theYoungArts, DownBeat, Grammy National Band, Brubeck, and Kennedy Center/Jazz Ahead Institutes.

Dariusz Terefenko is Associate Professor at the Eastman School of Music, where he holds a joint appointment in two departments: Jazz and Contemporary Media, and Music Theory. In addition, Terefenko is also the Coordinator for the Advanced Certificate in the Art of Improvisation. His books Jazz Theory – From Basic to Advanced Study (Routledge, 2017), Jazz Theory Workbook (Routledge, 2019), Jazz Voicings for Piano – The Complete Linear Approach, Volumes I and II (Advance Music, 2018) have been adopted as a textbook at music universities and colleges around the world. Jazz Theory – From Basic to Advanced Study and Jazz Theory Workbook are translated into the Polish and Chinese languages and adopted as a college course pack. Terefenko is an active performer and clinician giving piano recitals and masterclasses in the United States, Canada, Europe, China, and Brazil. His recordings Evidence and Crossing Paths feature a mixture of standard tunes and original compositions.

Rich Thompson has been in demand as a top call drummer in Rochester for the past 25 years. Besides serving as Eastman’s drum set instructor since 1996, Rich has toured, performed, and recorded with a “who’s who” of jazz greats, including pianist James Williams (Art Blakey and the Jazz Messengers), the Count Basie Orchestra, Tito Puente, Marion McPartland, Trio East (with Clay Jenkins and Jeff Campbell), and a host of others. The Boston Globe cited Rich as “the drummer who drove the Basie sound” when he appeared with them at the Boston Jazz and Blues Festival. Rich performs regularly with symphonies in the United States and Canada, on the world-renowned “Jazz Cruise”, and in clubs throughout the U.S. and Europe, with the Byron Stripling Quartet for the past five years.    His clinics and performances have taken him to France, Thailand, Japan, Switzerland, and Newfoundland. Rich’s CDs include Trio Generations; Less is More with trumpet sensation Terell Stafford, Gary Versace, and Jeff Campbell; Have Trumpet Will Swing with the Bryon Stripling Quartet; and I Believe in You with Triocity featuring Charles Pillow and Jeff Campbell.