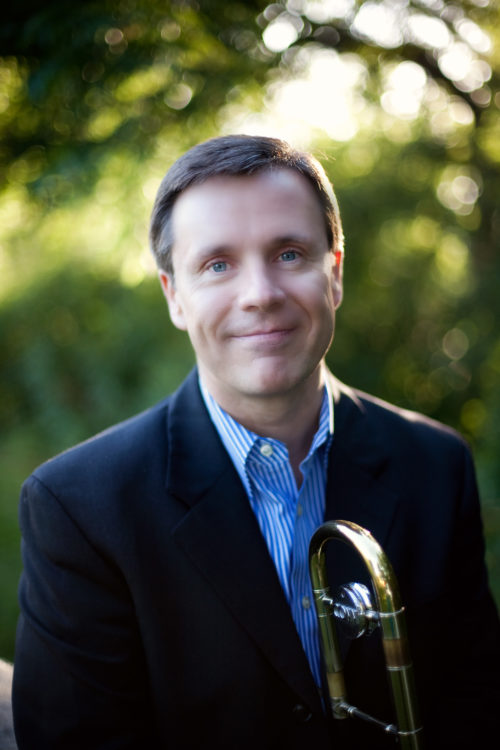 The Faculty Artist Series presents Mark Kellogg, Professor of Euphonium, Trombone, and Brass Chamber Music, Sunday, November 1, at 7:30 p.m. Mark Kellogg, trombone, will be assisted by Priscilla Yuen and Christopher Azzara, piano. The program consists of music of Kellogg, Hindemith, and Ravel, plus a selection of jazz standards. For his program, Kellogg chose music with an inherent sense of optimism, calling this performance “Optimistic Voices”. This concert presented through LIVESTREAM as a virtual performance.

An Eastman School faculty member since 1991, Mark Kellogg serves as Chair of the Winds, Brass and Percussion Department and as affiliate faculty in the departments of Jazz and Contemporary Media and Music Teaching in Learning. Co-Director of the Eastman Trombone Choir, he also is Director of the school’s community engagement program, Eastman To Go. Throughout his career Mr. Kellogg has embraced a wide variety of performing roles from jazz soloist to chamber musician to orchestral, including a twenty-eight-year tenure as a member of the Rochester Philharmonic Orchestra. IN the RPO, he occupied the Austin Hildebrandt Principal Trombone position and appeared as soloist with the orchestra on many occasions. Since 2016, he has concertized extensively with Eastman faculty pianist Priscilla Yuen, performing across the United States and South America.

Receiving his B.M. and Performer’s Certificate from the Eastman School, Mr. Kellogg has enjoyed a long association as a trombone and euphonium soloist with the Eastman Wind Ensemble, performing many times with the group in Kodak Hall, Carnegie Hall and throughout Japan. He was a founding member of the brass and percussion chamber ensemble Rhythm & Brass, touring the US and Asia and recording four CD’s during his two years in the group. Additionally, he has two solo recordings to his credit; Upstate Standards with faculty piano colleague Tony Caramia which celebrates the music of Arlen, Van Heusen and Wilder and Impressions, a collection of French music for trombone and piano featuring pianists Joseph Werner and Christopher Azzara.

Priscilla Yuen is currently working at the Eastman School of Music as Assistant Professor of Accompanying and Coordinator of Accompanying Services.  Ms. Yuen regularly supports instrumentalists and vocalists from across the Eastman community as they prepare for recitals, competitions, and recordings.  Additionally, she serves on the piano faculty at the Rochester Institute of Technology. She formerly served as arts/administrative coordinator and staff pianist at the New York Summer Music Festival for several summers and also served as Director of Operations at the Odyssey Chamber Music Festival in Columbia, MO.  Since 2016, she has performed extensively across the country with Eastman faculty trombonist Mark Kellogg.  Ms. Yuen received her Master of Music degree from the Eastman School of Music in Piano Accompanying & Chamber Music and received her Bachelor of Music degree from the University of Missouri-Columbia in Piano Performance.

Professor of Music Teaching and Learning at the Eastman School of Music, Christopher Azzara is also an Affiliate Faculty Member in Jazz Studies and Contemporary Media. Pianist, arranger, author, and educator, Azzara has made important contributions to advancing the understanding of creativity and improvisation in the music learning process. He is the author of numerous articles, arrangements, and books, including Developing Musicianship through Improvisation. An active teacher and clinician, he has taught and performed extensively throughout the United States, and in Canada, the Caribbean, France, Germany, Italy, Lithuania, Poland, Portugal, China, Japan, and Australia. After earning his Bachelor of Music degree from George Mason University, he later received a Master of Music and a Ph.D. in Music Education from the Eastman School of Music

Mark Kellogg’s performance will be live streamed at https://www.esm.rochester.edu/live/ and will be free to view. stream will start approximately 15 minutes before the event.