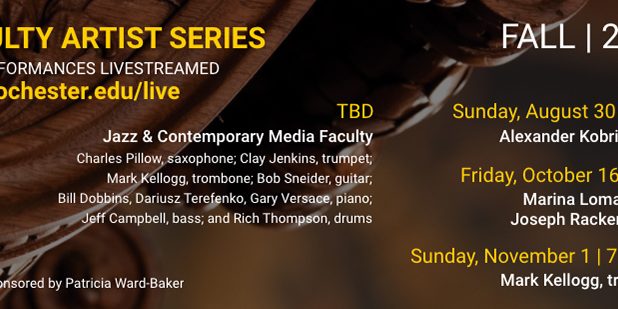 The Faculty Artist Series presents Marina Lomazov, and Joseph Rackers, both Professors of Piano, on October 16 at 7:30 p.m. at the Eastman School of Music. The Lomazov/Rackers Piano Duo’s program includes Mozart’s Sonata in C Major, K. 521; Brahms’ Variations on a Theme of Haydn; Schubert’s Fantasy in F Minor, D. 940; and Stravinsky’s Three Movements from “Pétrouchka.” This concert presented through LIVESTREAM as a virtual performance.

The Lomazov/Rackers Piano Duo has been praised for “demon precision and complete dedication” (Audio Society). Gramophone praises the duo for “assured and centered pianism” and American Record Guide writes “the ensemble between Lomazov and Rackers is dead-on”.  The duo garnered significant attention as Second Prize winners at the Sixth Biennial Ellis Competition for Duo Pianists (2005), the only national duo piano competition in the United States at that time. As advocates of modern repertoire for duo piano, they have given premieres of numerous works across the United States, including several works written specifically for them.

Before immigrating to the United States in 1990, Marina studied at the Kiev Conservatory where she became the youngest First Prize Winner at the all-Kiev Piano Competition. Ms. Lomazov holds degrees from the Juilliard School and the Eastman School of Music, receiving the highly coveted Artist’s Certificate. Her teachers include Natalya Antonova, Jerome Lowenthal, and Barry Snyder.

Ms. Lomazov is a Professor of Piano at the Eastman School of Music. She has served as jury member for the Cleveland, Hilton Head, and Eastman International Piano Competitions, Minnesota International Piano e-Competition, and National Federation Biennial Young Artist Auditions, and is the chair of the National Panel for the National Foundation for Advancement of the Arts, the organization that nominates Presidential Scholars in the arts. For 17 years she served on the faculty of the University of South Carolina School of Music, where she held the chair of Ira McKissick Koger Professor of Fine Arts Music and where she is currently a Visiting Guest Artist. Together with Joseph Rackers, she co-founded and serves as Co-Artistic Director of the Southeastern Piano Festival in Columbia, SC. Lomazov is a Steinway Artist.

A devoted teacher, Rackers has given master classes at Indiana University, University of Michigan, Boston University, Gina Bachauer International Piano Festival, UCLA, University of Nevada at Las Vegas, Vanderbilt, Universities of North Carolina, Colorado, Montana, Arizona State, Texas State, and at conservatories and music festivals across the United States, Europe, and Asia. His students have been prizewinners in numerous national and international piano competitions. After a year as a Visiting Professor of Piano at the Eastman School of Music, Rackers is now a full-time Professor of Piano. Previously he was Professor of Piano and Coordinator of the Piano Department at the University of South Carolina School of Music, where he taught an international class of pianists, and serves as Co-Director of the Southeastern Piano Festival, one of the premiere venues in the United States for the training of young pianists and presentation of distinguished artists in concert. He is in demand as a jury member for national and international piano competitions, including the Hilton Head International Piano Competition, National Foundation for Advancement in the Arts, PepsiCo National Concerto Competition, and Arthur Fraser International Piano Competition.

The Lomazov/Rackers Duo’s recital will be live streamed at https://www.esm.rochester.edu/live/ and will be free to view. The stream will start approximately 15 minutes before the event.