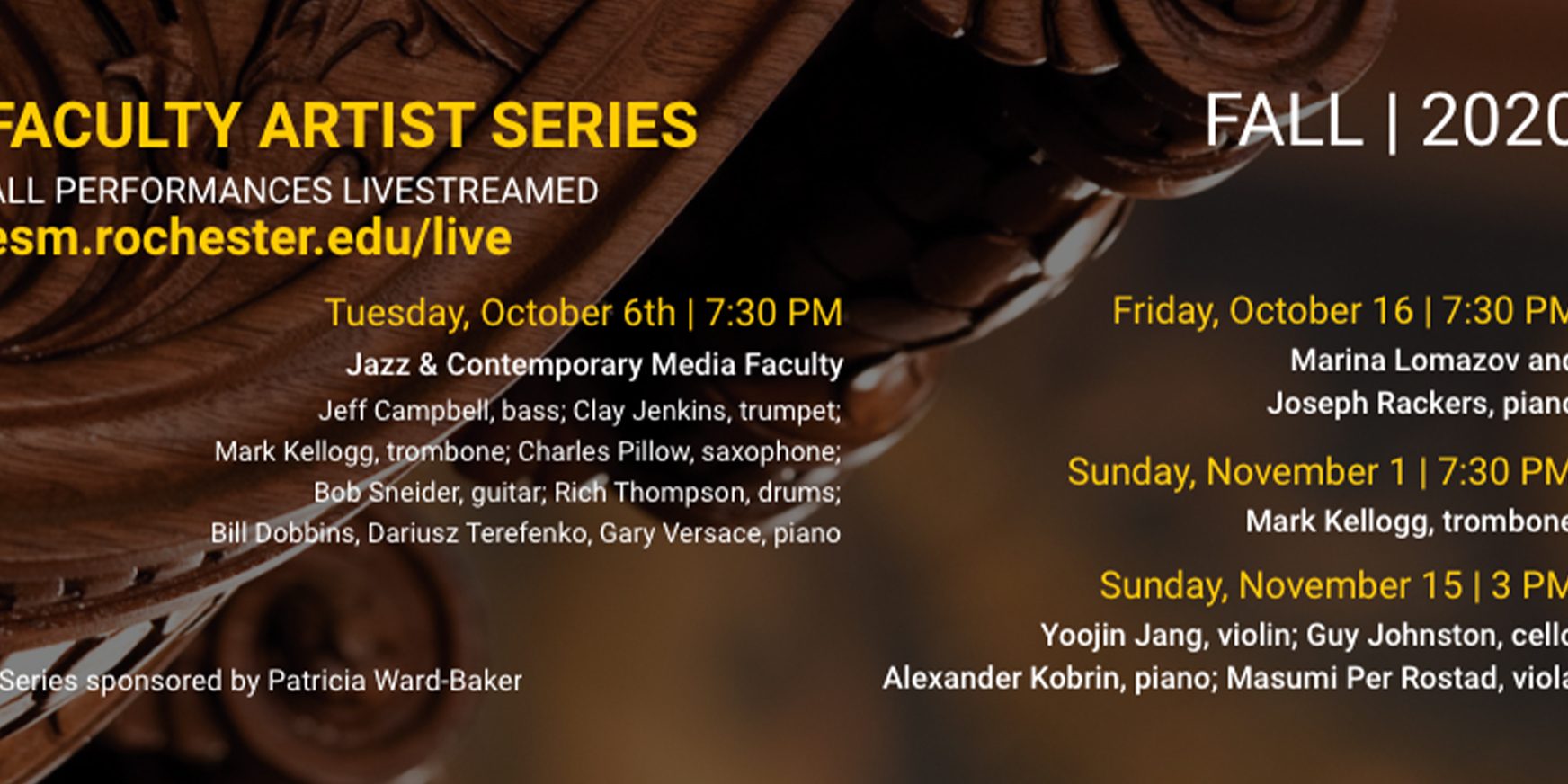 The Faculty Artist Series presents a Jazz and Contemporary Media (JCM) Department Showcase on Saturday, October 17 at 7:30 p.m. in Kilbourn Hall. This concert will be presented through LIVESTREAM as a virtual performance.

Jeff Campbell has carved out an impressive career as bass player of extraordinary artistry, fluent in both the jazz and classical idioms. As a jazz bassist, he maintains an active schedule performing with Gene Bertoncini, Rich Perry, Trio East, Harold Jones, and the Eastman Jazz Quartet featuring Harold Danko; he also performed with Marian McPartland and appeared on McPartland’s National Public Radio program Piano Jazz. In demand across the globe, Jeff has performed at the Nice, Montreux, North Sea, Riga, and Parnu Jazz Festivals, and in the former Soviet Union and the Baltic Republics. His first CD, West End Avenue with John Hollenbeck and John Wojceichowski, features a combination of original compositions and jazz standards. Jeff is a member of the Rochester Philharmonic Orchestra bass section. A full-time professor at Eastman since 1997, his summers are occupied as program director of the Birch Creek Music Performance Center in Door County, Wisconsin, and as co-director of the Eastman Summer Jazz Studies and Bass Day.

Bill Dobbins teaches jazz composing and arranging and directs the award-winning Eastman Jazz Ensemble and Eastman Studio Orchestra. He has performed with orchestras and chamber ensembles directed by Louis Lane, Pierre Boulez and Frederick Fennell, and has performed and recorded with such jazz artists as Clark Terry, Al Cohn, Red Mitchell, Dave Liebman and Peter Erskine. He was instrumental in designing the curricula for Eastman’s masters and bachelors jazz degree programs. His students have performed in the bands of Count Basie, Woody Herman, Buddy Rich, Maynard Ferguson, Thad Jones/Mel Lewis, Chuck Mangione, Maria Schneider and Bob Brookmeyer. In 1994 he was appointed principal director of the WDR Big Band in Cologne, Germany, and from 1998 was also head of the jazz department of the Cologne Music Academy. Since returning to Eastman in 2002, he continues to write for the WDR Big Band, The Netherlands Metropole Orchestra and the Scottish National Jazz Orchestra.

Clay Jenkins’ career as a jazz artist has brought him to the forefront of the jazz performing and teaching arenas. Clay’s experience as a performer began at an early age playing with the Stan Kenton Orchestra. Since moving to Rochester in 2000 to join the Eastman faculty, Clay has maintained a busy performing, recording, and teaching schedule throughout the United States and abroad. Clay continues to perform and record with the Clayton/Hamilton Jazz Orchestra, whose trumpet section also included the great Eugene “Snooky” Young (1919-2011); Clay recently established the “Snooky Young Endowed Scholarship” at Eastman to assist under-represented minority students. Clay has performed on over one hundred recordings, releasing seven solo recordings under his name, and records with his Eastman colleagues Jeff Campbell and Rich Thompson as “Trio East.” Clay’s latest recording project, soon to be released, included guitarists Gene Bertoncini and Larry Koonse, drummers Joe La Barbera and Jeff Hamilton, and bassist John Clayton.

An Eastman faculty member since 1991, Mark Kellogg is Professor of Trombone, Euphonium, and Brass Chamber Music and chair of the Winds, Brass, and Percussion Department. Co-Director of the Eastman Trombone Choir, he also serves as Director for the school’s community engagement program, Eastman To Go. Mr. Kellogg recently concluded a twenty-eight-year tenure as a member of the Rochester Philharmonic Orchestra. He occupied the Austin Hildebrandt Principal Trombone position and appeared as soloist with the RPO on many occasions. Active as a jazz musician throughout his career, Mr. Kellogg has performed with Clark Terry, Chris Vadala, Wynton Marsalis, Eddie Daniels, and Mel Tormé. Recent recordings include collaborations with Jeff Tyzik, Gene Bertoncini, Allen Vizzutti, Steve Gadd, and Gap Mangione. His jazz recording with Eastman colleague pianist Tony Caramia, Upstate Standards, celebrates the music of upstate New York composers Harold Arlen, Alec Wilder, and Jimmy Van Heusen.

With seven CDs to his credit, Charles Pillow has established himself as one of the premier woodwind instrumentalists and saxophonists of the day. His recordings include a new release, Chamber Jazz (Summit), with Gary Versace, Jeff Campbell, and Rich Thompson; Electric Miles (MAMA, 2018), with his large ensemble featuring the music of Miles Davis, which was a Top 10 critics pick; Triocity (Originarts, 2017), with fellow Eastman instructors Jeff Campbell and Rich Thompson; Van Gogh Letters (ELCM, 2010), featuring Eastman instructor Gary Versace; The Planets and Pictures at an Exhibition, both on Artistshare; In this World (Summit, 2001) and Currents (Challenge, 1996). A fluent performer, educator and touring musician, he has appeared on over 100 recordings by such artists as John Scofield, Joe Henderson, Michael Brecker, Tom Harrell, Jay Z, Mariah Carey, Maria Schneider, David Sanborn, David Liebman, and Bob Mintzer. In addition to teaching at Eastman, he gives clinics and master classes throughout the United States and has appeared at many of European and American jazz festivals.

Before joining the Eastman faculty in 1997, Bob Sneider toured for several years with two-time Grammy Award winner Chuck Mangione. He has performed, toured, or recorded with Nat Adderley, Joe Locke, Don Menza, Lou Donaldson, Joey Defrancesco, Pat Bianchi, Gary Versace, and Pat Labarbara; made frequent appearances with the Rochester Philharmonic Orchestra Pops (guitar/banjo); and has performed in major festivals, concert halls and jazz clubs throughout South America, Central America, North America, and Europe. Sneider is a graduate of the University of Rochester, where he studied with Bill Dobbins and Ramon Ricker.  Sneider’s solo and co-led CD projects have received rave reviews and international airplay: the self-produced Introducing Bob Sneider; Out of the Darkness, and duo projects with pianist Paul Hofmann  Interconnection, and Escapade (SonsofSound); Serve & Volley (Origin); and The Bob Sneider/Joe Locke Film Noir Project, including Fallen Angel (Sonsofsound), Nocturne for Ava (Origin), and All Through The Night (RIJF). Several of his students have won major jazz competitions and have attended theYoungArts, DownBeat, Grammy National Band, Brubeck, and Kennedy Center/Jazz Ahead Institutes.

Dariusz Terefenko is Associate Professor at the Eastman School of Music, where he holds a joint appointment in two departments: Jazz and Contemporary Media, and Music Theory. In addition, Terefenko is also the Coordinator for the Advanced Certificate in the Art of Improvisation. His books Jazz Theory – From Basic to Advanced Study (Routledge, 2017), Jazz Theory Workbook (Routledge, 2019), Jazz Voicings for Piano – The Complete Linear Approach, Volumes I and II (Advance Music, 2018) have been adopted as a textbook at music universities and colleges around the world. Jazz Theory – From Basic to Advanced Study and Jazz Theory Workbook are translated into the Polish and Chinese languages and adopted as a college course pack. Terefenko is an active performer and clinician giving piano recitals and masterclasses in the United States, Canada, Europe, China, and Brazil. His recordings Evidence and Crossing Paths feature a mixture of standard tunes and original compositions.

Rich Thompson has been in demand as a top call drummer in Rochester for the past 25 years. Besides serving as Eastman’s drum set instructor since 1996, Rich has toured, performed, and recorded with a “who’s who” of jazz greats, including pianist James Williams (Art Blakey and the Jazz Messengers), the Count Basie Orchestra, Tito Puente, Marion McPartland, Trio East (with Clay Jenkins and Jeff Campbell), and a host of others. The Boston Globe cited Rich as “the drummer who drove the Basie sound” when he appeared with them at the Boston Jazz and Blues Festival. Rich performs regularly with symphonies in the United States and Canada, on the world-renowned “Jazz Cruise”, and in clubs throughout the U.S. and Europe, with the Byron Stripling Quartet for the past five years.    His clinics and performances have taken him to France, Thailand, Japan, Switzerland, and Newfoundland. Rich’s CDs include Trio Generations; Less is More with trumpet sensation Terell Stafford, Gary Versace, and Jeff Campbell; Have Trumpet Will Swing with the Bryon Stripling Quartet; and I Believe in You with Triocity featuring Charles Pillow and Jeff Campbell.

Jazz pianist, organist, and accordionist Gary Versace is one of the busiest, most versatile musicians on the international jazz scene. Versace has released several CD’s on the Criss Cross and SteepleChase labels, the most recent being All for Now, released in 2020 to critical acclaim and a four-star review in Downbeat magazine. He received a Grammy nomination in 2019, along with vocalist Kate McGarry and guitarist Keith Ganz, for their trio recording The Subject Tonight is Love, marking his eighth appearance on a Grammy-nominated recording. Other recent CD releases as a sideman include appearances with Rich Perry, Vic Juris, John Hollenbeck, and the Frankfurt Radio Big Band, and dozens more with nationally and internationally known jazz artists. Versace appears annually in Downbeat‘s Critics and Reader’s Polls, and won the Jazz Journalists’ Association’s ‘Best Instrumentalist – Instruments Rare In Jazz (accordion)’ award in 2018 and their ‘Organist of the Year’ award in 2012. Gary appeared twice as a guest on Marian McPartland’s Piano Jazz, and McPartland described him as “…endlessly inventive… (Versace) really has an extraordinary talent.” Gary joined the Eastman faculty in 2017 as an Associate Professor of Jazz Studies, and maintains an active career worldwide as a performer, educator, and clinician.

The October 6 JCM Showcase will be live streamed at https://www.esm.rochester.edu/live/. The stream will start approximately 15 minutes before the event.