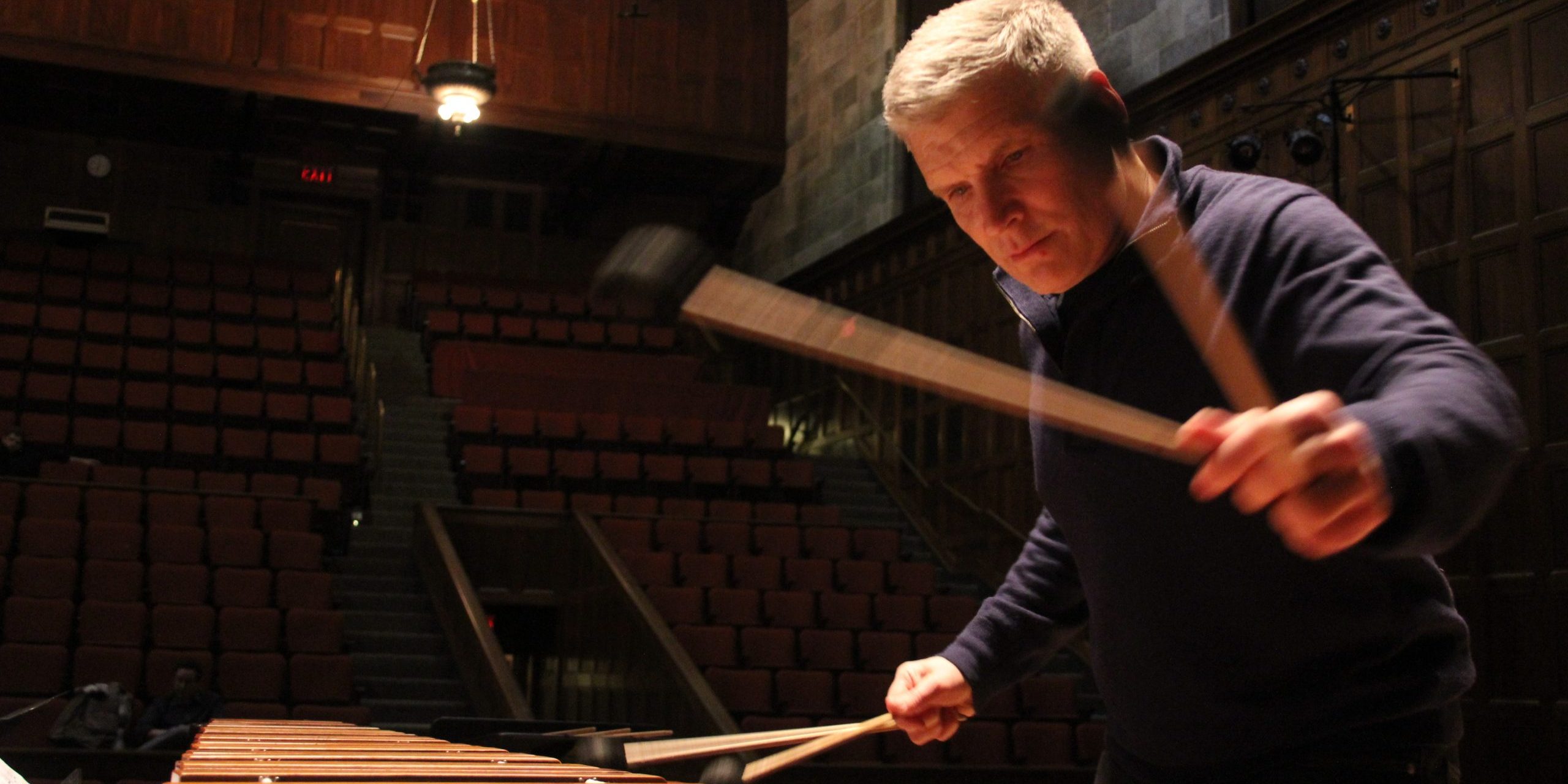 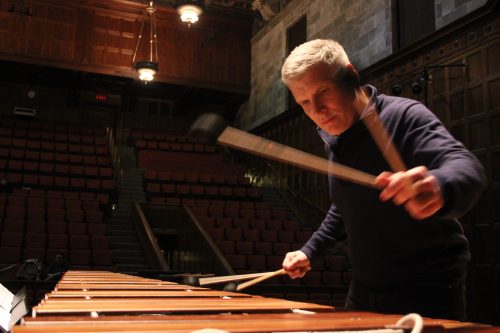 On Friday, September 27, 2019, Eastman’s Michael Burritt was installed as the Paul J. Burgett Distinguished Professor. Burritt has served as the Professor of Percussion at Eastman for eleven years, and is only the third person to hold this position in the almost one-hundred year existence of the school. The endowment was generously gifted by a pair of anonymous donors, and is Eastman’s first ever distinguished professorship. Born out of a deep appreciation for music and its power to transform lives, the Paul J. Burgett Distinguished Professorship was named in honor of one of the University of Rochester’s most beloved figures. (You can read more about the professorship and Paul Burgett here.) The installment ceremony took place in Kilbourn Hall during a full-length recital given by Burritt, who was accompanied by many of his current students and featured music composed by former students and himself.

Professor Burritt’s tenure at Eastman began long before his first year teaching at the school in 2008. Speaking of his connection with Eastman early in life, he explained, “I grew up in Syracuse and my father was a very well-respected band director, so I grew up knowing a lot about music as a youngster. I remember we had Eastman Wind Ensemble albums in the house, and when I was a kid Frederick Fennell came to our high school. So did Donald Hunsberger and Warren Benson, for example. I grew up thinking about Eastman as Mecca as a kid, so getting into Eastman eventually and studying here was a dream come true.” Burritt went on to receive his Bachelor’s and Master’s degrees from Eastman in 1984 and 1986 respectively, as well as the prestigious Performer’s Certificate.

Throughout his time at Eastman he studied under the tutelage of the school’s second percussion professor, John H. Beck, who taught from 1967-2008. “John Beck was an absolutely wonderful person in terms of his ability to help you understand how to be a professional and to focus on big global ideas that were important, like learning things thoroughly and correctly, and making good sounds all the time. I needed refinement and someone to help me understand what it meant to really grow and have a more mature sense of what a musician was.” Undoubtedly, these qualities have remained a fundamental part of Burritt’s teaching philosophy since leaving Eastman and ultimately returning as the successor to John Beck.

There was a span of 23 years between the time Burritt had graduated with his Master’s degree and come back to start teaching. He described the experience saying, “Even though I knew what Eastman was like, I hadn’t been here in a long time and I had never been a professional here. So it was a challenge, because it was new and I had to prove myself again in some ways. But I think it was one of the first times in my life where I felt very confident about what I was going to do and how I was going to do it. It was really exciting to take what I knew and what I had done and try to bring that here.”

Burritt finds his relationship with the students to be one of the most rewarding aspects of teaching at Eastman. “I feel like our studio has really grown into being an exceptional studio. I enjoy my students deeply. I enjoy them as people and I really enjoy watching their musical success.” Burritt has had a number of Eastman students graduate and go on to become leaders in the field as performers, teachers, administrators, composers, and more. “I think most importantly for me, it’s really exciting to see so many talented people together in one place. To be the person that gets to guide and go along for the ride with the students is super exciting and a huge honor.”

When asked to describe some his most memorable performance experiences at Eastman, Burritt shared how nervous he was to play at Convocation after being hired in 2008 and reminisced about his first Convocation as a student in 1982, where he watched Richard Killmer give his first performance as Professor of Oboe. He looked back on his first percussion ensemble concert at Eastman, as well as his solo performance with the Eastman Wind Ensemble on their Midwest Clinic tour in 2009. But he ended by saying, “I think one of my favorite memories is going to be the memory of the concert we gave this past September where they gave me the professorship, which was a hugely humbling and momentous occasion. For me the most special thing was having my students on stage, I felt like they were excited to be a part of it and that meant a lot to me. The spirit of the evening and having them working up there with me was special, I always love sharing it with the students.”

Andrew Bockman is a doctoral percussion student and one of Eastman’s student bloggers.