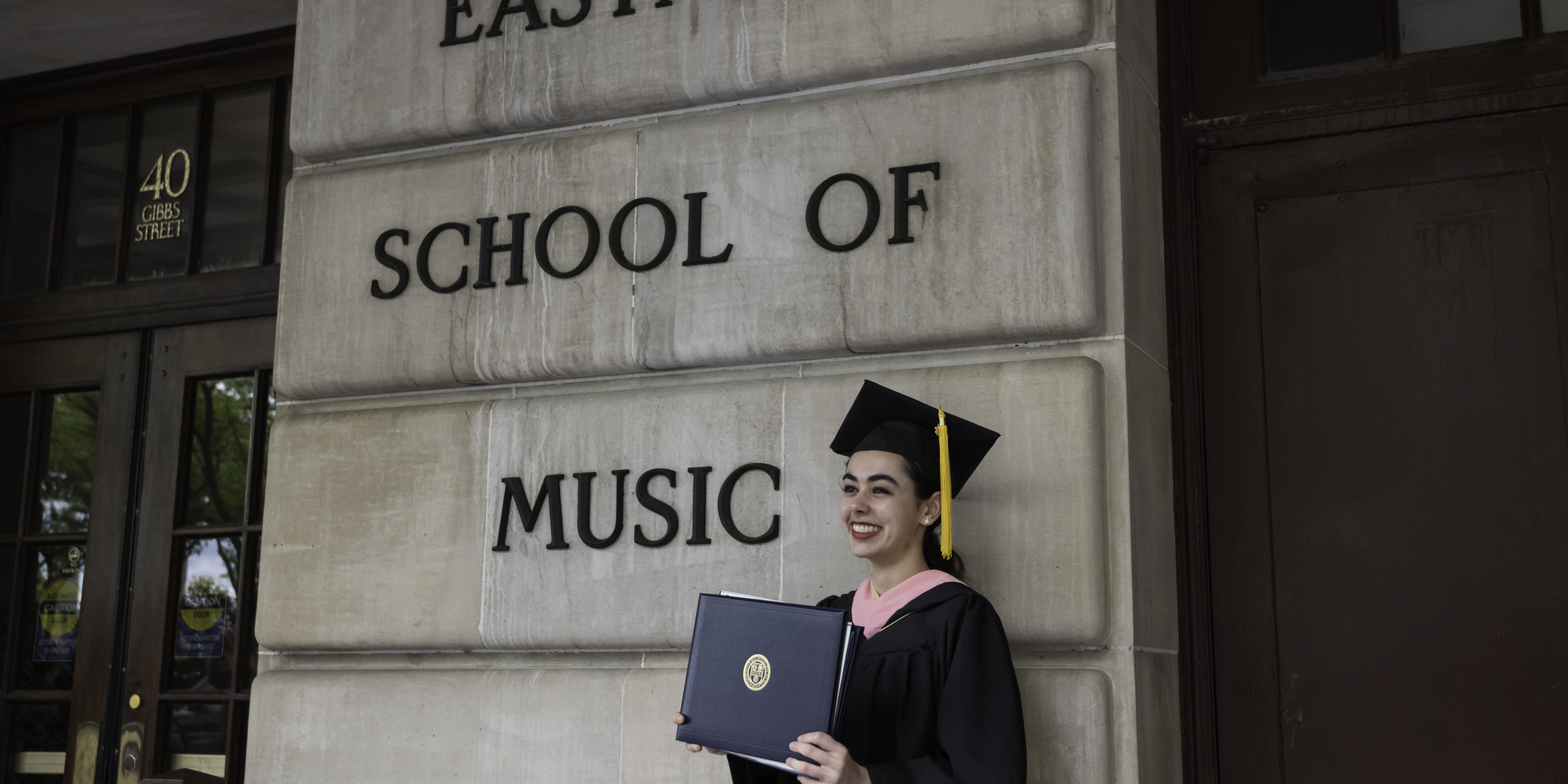 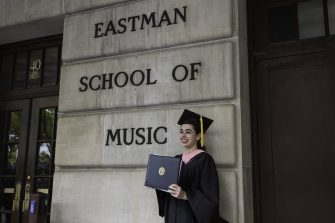 The annual commencement for Eastman School of Music bachelor’s and master’s degree students will take place on Sunday, May 19th, at 11:15 a.m. in Kodak Hall at Eastman Theatre. The Sunday ceremony is for students receiving their Bachelor of Music, Master of Arts, and Master of Music degree. The ceremony for students receiving a Doctor of Musical Arts and Doctor of Philosophy degree will be held at 9 a.m. Saturday, May 18, in Kodak Hall.

Julia Bullock (BM’09) will be this year’s Commencement Speaker on May 19th.  In addition to her blossoming career as a soprano vocalist with the major opera companies in the world, she has performed recently with the New York Philharmonic, Boston Symphony Orchestra, Los Angeles Philharmonic, London Symphony Orchestra, and Berliner Philharmoniker. Julia is also serving as the 2018-19 Artist in Residence of the Metropolitan Museum of Art.

American vocalist Julia Bullock is “a musician who delights in making her own rules” (New Yorker). Combining versatile artistry with a probing intellect and commanding stage presence, she has, in her early 30s, already headlined productions and concerts at some of the preeminent arts institutions worldwide. An innovative programmer whose artistic curation is in high demand, she was recently named 2019-20 Artist-in-Residence of San Francisco Symphony. Chosen as one of WQXR’s “19 for 19” artists to watch this year, Bullock is also a prominent voice of social consciousness and activism. As Vanity Fair notes, she is “young, highly successful, [and] politically engaged,” with the “ability to inject each note she sings with a sense of grace and urgency, lending her performances the feel of being both of the moment and incredibly timeless.”

Bullock’s growing discography already comprises a number of distinguished recordings. Her account of Quatre poèmes hindous with Rattle and the London Symphony was captured live on DVD, as was her title role appearance in Sellars’s production of The Indian Queen for Sony Classical. Selected as one of the New York Times’s “25 Best Musical Tracks of 2018,” her starring role in Adams’s Doctor Atomic, recorded with the composer conducting the BBC Symphony Orchestra, was a nominee for the 2018 Grammy Award for Best Opera Recording. This marked Bullock’s second appearance on a Grammy-nominated recording, following her live account of West Side Story with Tilson Thomas and the San Francisco Symphony, a nominee for Best Musical Theater Album in 2014.

Bullock’s political engagement is informed by her own mixed heritage, and she is committed to integrating community activism with her musical life. As well as trying to undertake outreach work in each city she visits, she serves on the Advisory Board of Turn The Spotlight, a foundation designed to empower women and people of color, both on stage and behind the scenes, to make a more equitable future in the arts. She has also organized and participated in benefit concerts for the FSH Society, which funds research for Muscular Dystrophy; the Medicine Initiative for New York’s Weill Medical Center; and the Shropshire Music Foundation, a non-profit serving war-affected children and adolescents through music education and performance programs in Northern Ireland, Kosovo, and Uganda.