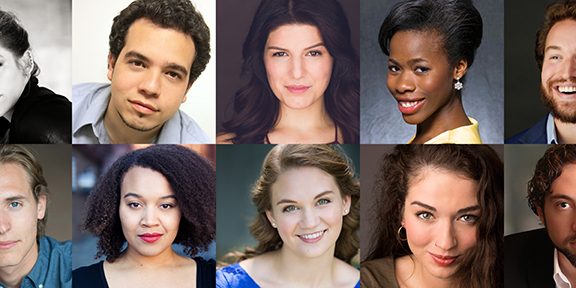 The Evening Concert at 8 p.m. will be available to view via live stream: https://www.esm.rochester.edu/live/ . Streaming begins approximately 15 minutes before the start of the concert.

Fourteen versatile singer-actors from Israel, France, Mexico, Canada, and across the United States are coming to the Eastman School of Music to compete in the finals of the 2017 Lotte Lenya Competition on Saturday, April 22.  The contestants will be vying for the largest prizes since the event started in 1998, with the top three winners taking home $20,000, $15,000, and $10,000.

The Lotte Lenya Competition is an international theater singing contest recognizing talented young performers, ages 19 to 32, who are dramatically and musically convincing in a wide range of repertoire, and emphasizes the acting of songs within a dramatic context. Held annually by the Kurt Weill Foundation for Music, it was founded in 1998 by foundation President & CEO Kim H. Kowalke, Professor of Musicology at the Eastman School of Music and, since 1987, the head of the Musical Theater Workshops at the University of Rochester.

“The ever-rising level of talent appearing at this event since its inception made this year’s semi-finals especially competitive,” said Kowalke. “Audiences who attend the finals will have the opportunity to see world-class performers.  Some have already launched successful careers, others just on the cusp.  The judges have their work cut out for them this year.”

For the finals, each contestant will present a program consisting of an aria from the opera or operetta repertoire; two songs from the American musical theater repertoire; and a theatrical selection by Kurt Weill. The finalists will present their full program during the daytime round, 11 a.m. to 4 p.m. An evening concert, in which contestants sing only a portion of their programs, follows at 8 p.m.  Awards will be announced at the end of the evening. Both the daytime round and the evening concert will be held in Kilbourn Hall and are free and open to the public.

The range of genres in which competitors must excel led Opera News to note, “No vocal contest better targets today’s total-package talents, unearthing up-and-coming singers who are ready for their close-ups.”

The finalists’ performances will be judged by renowned stage director Anne Bogart, who directed the highly acclaimed production of Lost in the Stars with the Los Angeles Chamber Orchestra this past January; Tony and Olivier Award-winning actor Shuler Hensel, whose credits include Waiting for Godot, Young Frankenstein, and Oklahoma!; and Rob Berman, music director for the popular Encores! series at New York City Center.

In addition to the top prizes, judges may also make discretionary awards of $3,500 each for outstanding performances of individual numbers. The new Kurt Weill Award of $5,000, established this year, will recognize an outstanding performance of two contrasting Weill selections. All finalists receive a minimum cash award of $1,000.

Since it was launched, the Lotte Lenya Competition has awarded more than $600,000 in prize money. Previous winners have gone on to appear in leading and featured roles in major theaters and opera houses around the globe, including on Broadway, with opera companies in New York City, Chicago, Houston, Hamburg, and Frankfurt opera, and on national and international tours.

The 14 competitors who made it to the finals from an initial pool of 266 applicants, the most ever received, are:

The Kurt Weill Foundation for Music, Inc. is dedicated to promoting understanding of the life and works of composer Kurt Weill (1900-1950) and preserving the legacies of Weill and his wife, actress-singer Lotte Lenya (1898-1981). The Eastman School of Music has hosted the finals of the Lotte Lenya Competition since its beginning.