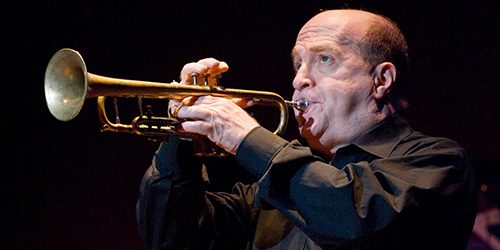 The Eastman School of Music community was shocked and saddened to learn of the untimely death of prominent jazz trumpeter Lew Soloff from a heart attack on Sunday, March 8, in New York City. Mr. Soloff, who was 71, received his Bachelor of Music degree at Eastman in 1965.

In a career spanning five decades, Mr. Soloff was considered a consummate musician who had performed with artists like Gil Evans, Frank Sinatra, Barbra Streisand, Maynard Ferguson, Tony Bennett, Aretha Franklin, Paul Shaffer, Ornette Coleman, Lou Reed, and many others. He helped found the Manhattan Jazz Quintet, played with the contemporary quintet Manhattan Brass, and had his own groups, including Lew Soloff and the Afro Cuban Ensemble and the Lew Soloff Quartet.

Mr. Soloff was known for his work with jazz-rock pioneers Blood, Sweat and Tears, where he created the searing horn lines in the song “Spinning Wheel.” He played with the band from 1968 to 1973, a period when the group earned nine Gold Records and a Grammy for 1969 Record of The Year.

Mr. Soloff’s classical training came out in his work with Manhattan Brass, where he performed traditional classical works by composers J.S. Bach, Monteverdi, and Gesualdo along with newer music by David Dzubay and Daniel Schnyder as well as jazz material by Wynton Marsalis and Paquito D’Rivera. He was also asked to perform with Coleman and The Kronos Quartet on a commission for trumpet and strings.

As an educator, Mr. Soloff was on the faculty of the Manhattan School of Music for nearly 20 years and served an adjunct faculty member at Julliard and New School.

Mr. Soloff appeared in Rochester twice in the past 8 years. In 2007, he performed in the recreation of fellow Eastman alumnus Chuck Mangione’s famous 1970 Friends and Love concert, the event which catapulted Mangione to national recognition. In October 2009, Mr. Soloff returned to Eastman to participate in a jazz forum and perform in a memorial tribute concert to saxophonist Gerry Niewood, a 1970 Eastman graduate with whom Mr. Soloff had performed.