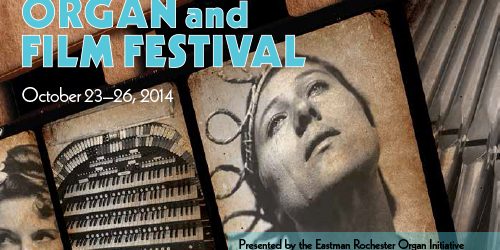 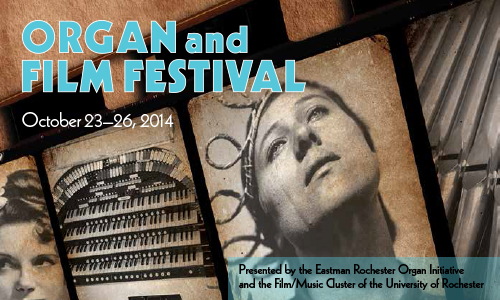 The art of organ accompaniment to silent film will be explored in an upcoming four-day event that includes screenings of several iconic movies from the early 20th century with live accompaniment by internationally known organists.

The Organ and Film Festival, presented by the Eastman Rochester Organ Initiative and the Film/Music Cluster of the University of Rochester, will be held Oct. 23 to 26 at the Eastman School of Music and several locations around Rochester. The program includes a number of public events that will appeal to both silent film and organ enthusiasts.

Along with the film screenings, the event features panel discussions and presentations on the effect of music on audiences, film music collections, improvisation, depictions of the organ in movies, performance practices of orchestras and organists, and other topics.

Silent films were not really “silent.” Screenings were accompanied by music performed by orchestras, small ensembles, or solo keyboardists that set the mood for the action on screen and enhanced the audience’s experience. With its ability to make a wide variety of instrumental sounds, the theatre organ played a dominant role in that experience. When Eastman School opened in 1921, a branch of its organ department was devoted to educating “photoplay” organists.

“Rochester has long been an important center for both organ music and film.  We are excited to be able to combine the two in this festival that celebrates many of our local resources and talent,” says David Higgs, professor and chair of the Department of Organ, Sacred Music, and Historical Keyboards at the Eastman School of Music. “It is my hope that community members take advantage of this rare opportunity to experience these great silent films with live accompaniment—I know those who attend will be challenged to think about how music shapes our viewing experience.”

Each of the festival’s four silent movie presentations will be held in a different venue, demonstrating the different qualities of each accompanying organ, and will be preceded by a talk. The screenings begin at 7:30 p.m. on Thursday, Oct. 23, at the Memorial Art Gallery, where Edoardo Bellotti will accompany several film shorts on the Italian Baroque Organ in the Fountain Court. The shorts include Mozart’s Last Requiem (Leon Gaumont, 1909); King Lear (Gerolamo Lo Savio, 1910); and The Birth, the Life, and the Death of Christ (Alice Guy, 1906). Bellotti is associate professor of organ, harpsichord, and improvisation at Eastman.

Ted Wild’s 1928 comedy Speedy, featuring famous comedian Harold Lloyd, will be shown at 8 p.m. Friday, Oct. 24, at Third Presbyterian Church, with accompaniment by Tom Trenney on the church’s Austin Organ. Trenney is known for his improvisations on hymns, submitted themes, silent films, scripture, poetry, and artwork. An alumnus of the Eastman School of Music, Trenney won the American Guild of Organist’s National Competition in Organ Improvisation in 2006 and now sits on the committee that administers that competition.

Live music by both organists and vocalists will accompany La Passion de Jeanne d’Arc, the 1928 movie directed by Carl Theodor Dreyer, showing at 8 p.m. Saturday, Oct. 25, in Christ Church. Based on the actual record of Joan of Arc’s trial, the movie was lauded for its innovative camera angles, stunning imagery, and compositions, with close-ups emphasizing the emotions on the actors’ faces. Stephen Kennedy and Edoardo Bellotti will perform on the Craighead-Saunders Organ, a detailed replica of an 18th-century instrument, and the Hook & Hastings Organ, a quintessential example of American Romantic organ building. They will be joined by the Christ Church Schola Cantorum, an ensemble that specializes in Gregorian chant, Renaissance and baroque choral music, and choral improvisation. Kennedy is director of music at Christ Church and teaches sacred music at Eastman.

Philip C. Carli, who tours extensively throughout North America and Europe as a film accompanist  and can be heard locally at the George Eastman House’s silent film screenings, will perform for the final “Organ and Film Festival” screening. Victor Fleming’s 1920 romantic comedy The Mollycoddle, starring Douglas Fairbanks, will be shown at 2:30 p.m. Sunday, Oct. 26, at the Rochester Museum and Science Center, where the audience can hear Carli on the Wurlitzer Theatre Organ in Eisenhart Auditorium.

More to See and Learn

The festival schedule includes a guided tour of George Eastman House, where the Kodak Company founder had an organ installed to provide music during breakfast and weekly dinners. Festival participants will be treated to demonstrations of the Aeolian organ by Nathan Laube, assistant professor of organ at Eastman.

Festival goers will also have the opportunity to tour the Eastman School of Music’s photoplay organ practice room, located on an upper floor of Eastman Theatre.

Presentations will cover topics ranging from music cognition and film to the movies of Ethel Smith, a multi-talented organist, arranger, and composer who appeared in several films in the 1940s. Nancy Kauffman and Kate Cronin of the George Eastman House and Donald Hunsberger, professor emeritus of conducting and ensembles at the Eastman School of Music, will talk about music cue sheets. Cue sheets were provided by studios as a guide to compiling music to accompany silent films, and the timings of musical selections on the sheets have proven useful in reconstructing damaged silent films.

A full schedule of events and registration information, including one-day passes, for the Organ and Film Festival is available online at esm.rochester.edu/eroi .

Tickets ($15 regular/$10 students) available at the door, one hour prior to performance.

Tickets ($15 regular/$10 students) available at the door, one hour prior to performance.

Tickets ($15 regular/$10 students) available at the door, one hour prior to performance.​