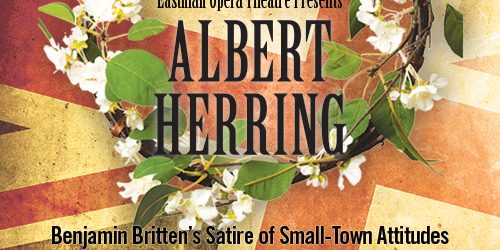 Eastman Opera Theatre brings Albert Herring, a comedic opera about a young British man who sets out to relinquish his purity, to the Kilbourn Hall stage for four performances beginning Thursday, November 6. The three-act, two-and-a-half-hour production by Benjamin Britten is a witty comedy and a pointed satire of British small-town attitudes.

The opera tells the story of Albert Herring, the blameless son of a widowed shopkeeper, and his appointment as May King during a local festival to encourage local chastity. To the town’s embarrassment, Albert sets out to lose his virtue immediately after being crowned. Like many of Britten’s other operas, the theme of marginalization by society flows throughout the narrative.

“One of the most distinctive aspects of this opera is its incredibly tight character development,” says Stephen Carr, assistant professor of opera at the Eastman School of Music and stage director for the production. “The characters are so cleverly drawn musically, we feel as if we know them in an instant, and while they may be somewhat archetypal, they are at their core the same kinds of people we all still encounter in our daily lives.”

The opera was cast during the spring 2014 semester, and students began preparing their roles over the summer. The rigorous process of putting together this opera demands four three-hour rehearsals per week. Staging began on September 22 and will continue until the production opens on November 6.

“I love going through this process with students, many of whom are the same age as Albert himself. And they were born to play these roles,” says Carr. “I’m spoiled, because while the audience sees the final product, I get to witness their growth throughout the entire creative process. A coming-of-age story like this is immediate to a cast this age, so they’re automatically starting from a place of uniquely genuine expression.”

Carr sees great value in double casting; with students required to attend rehearsals in which they are not actively participating, they will learn some of their most important lessons from watching. “When students see their role being performed by someone else, they can share in the breakthroughs of their peers. One of their colleagues, or I, or (music director and Distinguished Professor of Voice) Benton Hess may say something in a rehearsal that will ‘click’ for them as a performer for the first time, and potentially stay with them for the rest of their careers. I know I learned some of my greatest lessons watching from the wings. There is limitless value in being an active observer.”

Pre-performance lectures will be presented one hour before each performance in the Ray Wright Room (Room 120) in the Eastman School of Music.

Tickets to Albert Herring are $20 general admission, with discounts for student and UR ID holders, and are available at the Eastman Theatre Box Office, 433 East Main St., 585-454-2100, or online at eastmantheatre.org .