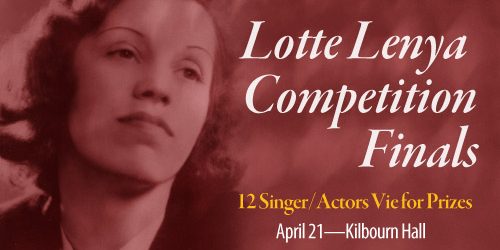 Two Eastman School of Music singers, recent Metropolitan Opera competition winner and graduate student Matthew Grills and alumna Natalie Ballenger, are among the 12 singer-actors in the finals of the 2012 Lotte Lenya Competition, which will be held Saturday, April 21, in Eastman’s Kilbourn Hall.

The contestants will compete for top prizes of $15,000, $10,000, and $7,500 in front of a panel of judges composed of three-time Tony Award nominee Rebecca Luker, Broadway and Encores! music director Rob  Berman, and Theodore S. Chapin, president of the Rodgers & Hammerstein Organization and chairman of the board of the American Theater Wing.

Held annually by the Kurt Weill Foundation for Music, the Lotte Lenya Competition is an international theater singing contest that recognizes talented young singer-actors, ages 19 to 30, who are dramatically and musically convincing in a wide range of repertoire, and emphasizes the acting of songs within a dramatic context. It was founded in 1998 by foundation President Kim H. Kowalke, who is the Richard L. Turner Professor in Humanities at the University of Rochester and professor of musicology at the Eastman School.

Grills was a Grand Finals winner in this year’s Metropolitan Opera National Council Auditions.  His performance credits include Prunier in La Rondine, Prince Charming in Massenet’s Cendrillon, Ferrando in Cosi fan tutte, the Balladeer/Lee Harvey Oswald in Assassins, and Jenik in The Bartered Bride. After graduating with a master’s degree in May, he will spend the summer in the Santa Fe Opera Apprentice Program and begin a year-long residency with the Portland Opera in the fall.

Ballenger received her Bachelor of Music degree in 2011 and is working on her master’s degree at the University of Southern California’s Thornton School of Music. She has spent the past two summers as a performer and assistant director with the Ohio Light Opera, and returns this summer in the roles of Sarah Brown in Guys and Dolls, Evelyn in A Connecticut Yankee, and Lori Aschenbrenner in Miss Springtime.  Ballenger was the recipient of an Emerging Artist Award in the 2011 Lotte Lenya Competition.

For the finals, each singer will present an aria from the opera or operetta repertoire, two songs from the American musical theater repertoire, and a theatrical selection by Kurt Weill, Lotte Lenya’s husband and one of the most versatile and influential theater composers of the 20th century.

The finals round will be held from 11 a.m. to 3 p.m., with a break from approximately 12:45 to 1:30 p.m. At 8 p.m., the competition will culminate in an evening concert featuring all of the finalists, followed by the announcement of the winners. Special prizes will be awarded in addition to the top prizes.  Both the daytime finals and evening concert are free and open to the public, and will take place in Kilbourn Hall.