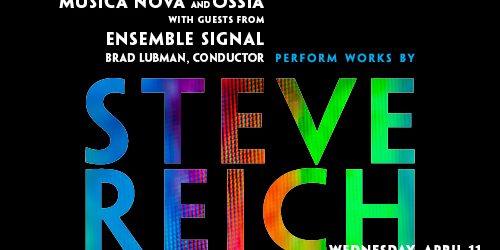 The critically acclaimed New York City-based Ensemble Signal will join Eastman School of Music  new music ensembles Musica Nova and Ossia to present three major works by Steve Reich at Kilbourn Hall on Wednesday, April 11 at 8 p.m. The concert is part of a collaboration in which the students will work alongside Signal members in all aspects of the project.

Associate Professor of Conducting and Ensembles Brad Lubman will lead the group of students and professionals in a program that spans nearly 40 years of Reich’s compositions in honor of his 75th birthday. The concert opens with Part I of Drumming, Reich’s monumental work from 1970-71. The program continues with the Rochester premiere of Double Sextet, Reich’s 2009 Pulitzer Prize-winning composition, performed in its version for two live ensembles, the first by Signal and the other by members of Eastman’s Musica Nova. The concert will close with Tehillim, Reich’s large-scale work for chamber ensemble and four vocalists, in its first Rochester performance since 1999.

The collaboration presents the breadth of Reich’s music while placing students and professionals shoulder-to-shoulder throughout the process, with members of Ossia and Musica Nova not only performing, but working on the production team as well. Having produced over 40 large–scale projects such as this one, Signal will spearhead the production of the concert in collaboration with a student production team from Ossia.  Lubman noted, “This concert of Steve Reich’s music gives the students a number of truly indispensable opportunities. Not only will they have the chance to play in the same ensemble alongside professional musicians from Signal, but the students will also learn about what goes into mounting and producing a concert with the type of large-scale production demands that a piece like Tehillim and Double Sextet require.” Lubman’s  long-standing relationship with Reich brings an expert ear to the performance of the selected works.

As part of their residency, members of Signal will also present a panel discussion for Eastman students, sponsored by the School’s Arts Leadership Program, focusing on the business aspects of producing and performing concerts as a chamber ensemble.  Signal represents a generation of “start-up” chamber ensembles that have come from the Eastman School in the last 15 years (such as Alarm Will Sound and JACK Quartet), presenting the skills necessary to run a successful organization.

Having worked closely with Reich since 1996, Lubman holds an intimate knowledge of Reich’s music. His relationship with Reich has included numerous world premieres and recordings of Reich’s music including performances with ensembles such as Steve Reich and Musicians, London Sinfonietta, Ensemble Modern, and Signal, in venues ranging from The Barbican and Carnegie Hall to Tokyo Opera City and Le Poisson Rouge. Lubman’s work with Signal has included numerous presentations of Reich’s large ensemble pieces as well as a recording of Music of 18 Musicians and Double Sextet to be released on Bang on a Can’s Cantaloupe Records.

Ensemble Signal was founded by Eastman School conducting faculty member Brad Lubman and cellist Lauren Radnofsky, an Eastman School graduate. The majority of the ensemble’s performers are Eastman alumni who in the past 15 years played in the School’s Musica Nova under the direction of Lubman. Since its first appearances in 2008 at the Bang on a Can Marathon in New York City, Ensemble Signal has earned widespread praise. Described by the New York Times as “one of the most vital groups of its kind,” the ensemble explains its mission as building new audiences for new music.

An entirely student-run organization, Ossia New Music produces professional-quality concerts of contemporary music at the Eastman School of Music and throughout the Rochester area. Ossia has been a part of the Eastman community for over 15 years and is financially supported by the Howard Hanson Fund.