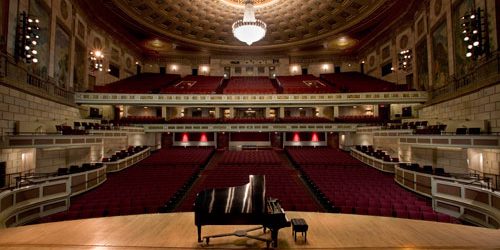 From the first Kilbourn Hall appearance by the Chamber Music Society of Lincoln Center to world-class music making by students, faculty, and guest artists, the Eastman School of Music boasts an exciting line-up of concerts as it nears its 90th birthday.

The first classes at Eastman were held Sept. 19, 1921, though the School’s formal opening was celebrated the following March and included the dedication of Kilbourn Hall on March 4, 1922. Fittingly, the opening event of the 2011-2012 concert season takes place in Kilbourn Hall, with Caution Shonhai performing traditional Shona mbira music of Zimbabwe  on Sept. 14 as part of the World Music Series. World music will return to Kilbourn in the spring, with a concert of traditional Irish music by Martin Hayes and Dennis Cahill on March 7, 2012; Korean drumming and dancing by the Jeng Yi ensemble on April 4, 2012; and Balinese percussion by Eastman’s own Gamelan Lila Muni on April 30, 2012.

The Kilbourn Concert Series kicks off on Oct. 18 with artists from the Chamber Music Society of Lincoln Center. The Society’s artist members perform throughout New York City and on U.S. tours, and will be featured at Eastman for the first time. The series continues on Nov. 8 with Trio Solisti, an ensemble dedicated to the literature for piano trio. In 2012, the Imani Winds quintet and pianist Simone Dinnerstein will give their Kilbourn Hall debut recitals on Jan. 31 and April 3, respectively.

Kilbourn Hall is also the venue for the Eastman-Ranlet Series of string quartet recitals. The Grammy Award-winning Parker Quartet opens this year’s series on Oct. 16; they’ll be followed by the St. Lawrence String Quartet on Nov. 13.  Eastman’s own Ying Quartet will present two recitals next year: its annual LifeMusic concert of a commissioned work on Feb. 26, 2012, and the final recital of this season’s Ranlet series on April 22, 2012.

One of the original programs of study offered when the Eastman School opened was in organ, and the tradition and programs of organ performance have grown over nine decades. The department presents monthly concerts on the Italian Baroque Organ in the Memorial Art Gallery; this year the series features faculty member William Porter on Oct. 16; faculty members from the Academy of Music and Drama at the University of Gothenburg on Nov. 20; and the popular recital of vocal and instrument music for the holiday season on Dec. 18. The 10th annual EROI (Eastman Rochester Organ Initiative) Festival will be held Nov. 10 through 13; this year’s theme of “Improvisation” features several public concerts which showcase the improvisational skills of world-renowned organists. In addition, the Rochester Celebrity Organ Recital Series presents Diane Meredith Belcher on Sept. 23; Bruce Neswick on Nov. 13; and organist Zsigmond Szathmáry and percussionist Olaf Tzschoppe on Feb. 17, 2012.

This fall, Eastman Opera Theatre will present Stephen Sondheim’s Assassins, a portrayal of men and women who tried (and sometimes succeeded in) killing American presidents. The music in the opera, which runs Nov. 3 through 6, reflects the popular music of the assassins’ eras. In addition, the finals of the annual Friends of Eastman Opera Voice Competition will be held on Nov. 19. Next year, Eastman Opera Theatre will present Cimarosa’s comic masterpiece Il matrimonio segreto (The Clandestine Marriage) Feb. 2 through 5, 2012; and Smetana’s folk-inspired opera The Bartered Bride March 29 through April 1, 2012..

Eastman School faculty are world-renowned soloists and chamber musicians, packing in audiences when they perform out-of-town, and recitals at the School are an important part of their performing schedules. The Faculty Artist Series features pianists Russell Miller on Sept. 20, Tony Caramia on Sept. 25, Natalya Antonova on Oct. 2, Thomas Schumacher on Oct. 23, and Barry Snyder on Nov. 15; violinist Mikhail Kopelman on Nov. 6; cellist Steven Doane on Nov. 20; jazz trumpeter Clay Jenkins on Nov. 29; and bass-baritone Jan Opalach on Dec. 4. In addition, Eastman Virtuosi, a chamber ensemble of faculty and outstanding student musicians, will perform on Sept. 24.

A multitude of concerts by Eastman’s impressive vocal and instrumental student ensembles gives local audiences ample opportunities to enjoy diverse musical genres, from early music to jazz. This fall alone, the Eastman School Symphony and Philharmonia Orchestras present seven concerts and the Eastman Wind Ensemble and Wind Orchestra take to the Kodak Hall stage six times. Kilbourn Hall is the venue for seven jazz concerts, including performances by the Eastman Jazz and New Jazz Ensembles, Jazz Lab Band, and jazz faculty. Choral ensembles will appear in Eastman School and community locations; the schedule also includes a festival with Eastman and community vocal groups. More than a dozen chamber music and studio ensemble recitals are scheduled across Kilbourn and Hatch Recital Halls. Kilbourn Hall is also the setting for both early music, performed by Collegium Musicum, and new music, with recitals by Eastman School’s Musica Nova and Ossia ensembles, a guest appearance by Duo Diorama, and recitals of new works by Eastman composers.

A full listing of concerts and events can be found on the web by visiting Eastman’s homepage at www.esm.rochester.edu.  All are open to the public, and many are free. Tickets for concerts that required paid admission, with the exception of tickets for the Faculty Artist Series and organ concerts at the Memorial Art Gallery, are available at the Eastman Theatre Box Office, 433 East Main St. (in the Eastman East Wing),  585-454-2100, or online at www.esm.rochester.edu/concerts.