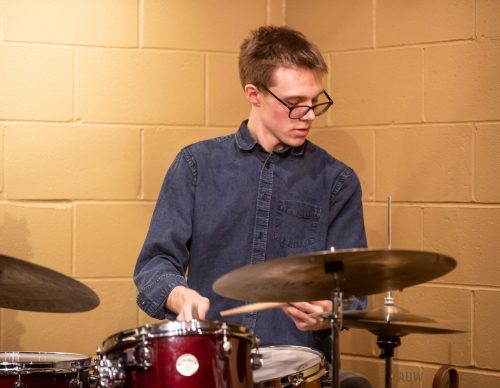 The award will be presented by Nugent and Iacona, along with Jeff Campbell,  Eastman Professor of Jazz Studies and Contemporary Media on Monday, June 24 at 8 pm, at Kodak Hall at Eastman Theatre at the festival’s annual free Jazz Scholarship Concert. The awards are part of the Festival’s mission to invest in the next generation of musicians, and support students attending the Eastman School of Music.

Marshall is a jazz drummer from Rochester, New York. He will enter Eastman School as a first-year student in the Jazz Studies and Contemporary Media department. Marshall attended Penfield High School, where he received a Regents Diploma with a major sequence in Music. Over the past four years, Marshall has performed with nine different ensembles and musical organizations.   The summer before his senior year, Marshall had the opportunity to participate in the Living Arts Apprenticeship Program as well as the Summer Jazz Studies at the Eastman School of Music. He has received lessons from Eric Metzgar, an Eastman graduate student, and with Rich Thompson, associate professor of Jazz Studies and Contemporary Media at Eastman.

Aside from taking part in ensembles and organizations, Marshall has also worked as a freelance musician and volunteer with organizations such as the Rochester Bible Baptist Church and Blackfriars Theater. Marshall shares, “attending the Jazz Festival has always been inspiring so I’m incredibly honored to have received this scholarship. I can’t wait to begin my studies at Eastman in the fall!”

This year’s presentation on June 24 will be opened by “Würzburg Meets Eastman”, an ensemble comprised of a combination of Eastman Jazz students as well as students from The Hochschule für Musik Würzburg Ensemble, part of the University of Music Würzburg in Germany.  As part of a three-year sister-city school initiative, this performance is the culmination of the students exchange program.  The ensemble will play music of Mary Paich, written for Art Pepper as heard on the seminal 1959 recording Art Petter +11 and conducted by Jeff Campbell. Following “Würzburg Meets Eastman”will be a performance by the Eastman Jazz Ensemble, Directed by Bill Dobbins.

For more information on the performance visit: http://rochesterjazz.com/artists?artist_id=610.

For information on past RIJF/ ESM scholarship winners see: http://www.rochesterjazz.com/scholarship

About the Rochester International Jazz Festival:

The CGI Rochester International Jazz Festival is one of the world’s leading jazz festivals. From legendary performers and familiar favorites to rising stars and new discoveries, we navigate all genres of creative improvised music from all corners of the world.  As one of the nation’s top international music festivals, we bring together unique musical sounds from many countries, highlighting international artists’ take on the only true American art form – jazz.

In addition to a headliner series and Club Pass Series of 220+ shows, we present more than 100 free shows and events including workshops for music students and nightly jam sessions, where there’s no telling who will drop in to play. It’s said that jazz never sleeps and this event proves it as the music goes on deep into the night  –  often with unsung musicians who electrify the room.

Our jazz scholarship program has awarded almost $500,000 in scholarships to 40 students entering Eastman School of Music since 2002.

The CGI Rochester International Jazz Festival is produced by RIJF, LLC, a privately held company owned by John Nugent and Marc Iacona. Nugent, Producer and Artistic Director, is a noted tenor sax player, who has traveled the world with many jazz artists including Tony Bennett, Ella Fitzgerald, Rosemary Clooney, The Woody Herman Orchestra and The Vanguard Jazz Orchestra. Marc Iacona, Producer and Executive Director, is a Rochester native and President of Simcona Electronics. A business and community leader, he is an avid trumpeter and supporter of the arts.