On Tuesday, Nov. 29, at 8 p.m. in the Eastman School of Music’s Hatch Recital Hall, pianist Yen-Yu (Jenny) Chen will perform a preview of her upcoming recital at The Morgan Library & Museum in New York City. 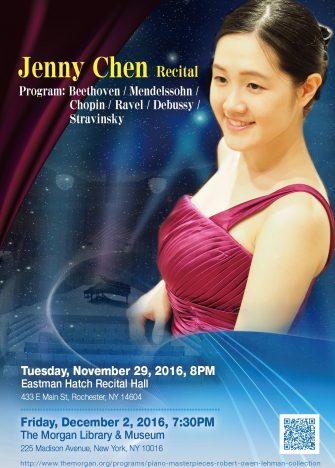 Chen, who is a Doctor of Musical Arts student, will perform works from Morgan’s extraordinary Robert Owen Lehman Collection of music manuscripts. A selection of manuscripts from the collection is on display in the Library, where the installation will rotate continuously throughout the 2016-2017 season. Chen’s “Eastman at the Morgan” recital in New York City, on Friday, Dec. 2, at 7:30 p.m., also celebrates Lehman’s 80th birthday.

In March 2016, Chen was featured in performances and interviews as a Performance Today Young Artist in Residence, and in June 2016, performed the Brahms Quintet in F Minor Op. 34 at the inaugural Chamber Music Encounters program sponsored by the Chamber Music Society of Lincoln Center. She has performed as soloist and chamber musician in major venues in the United States and abroad, including Field Concert Hall in Philadelphia, the Renée Weiler Concert Hall in New York City, Morse Recital Hall in New Haven, the Church of the Annunciation in Washington, D.C, Vredenburg Leeuwenbergh and Vredenburg Leidsche Rijn in the Netherlands, and the National Concert Hall in Taiwan.

Chen has appeared as a guest artist at many music festivals, including the Mainly Mozart Festival in San Diego, the Sejong International Music festival in Philadelphia, and Vredenburg Leidsche Rijn in Utrecht. In addition, she was invited to perform in the inauguration concert for the Pennsylvania Governor Tom Corbett in 2011. She has received scholarships and fellowships from the Suzanne Roberts Cultural Development Fund, the Stephen Hendel Scholarship and Fellowship, the Mary Clapp Howell Scholarship and Fellowship, the Stravinsky Awards Scholarship, Taiwan Chi-Mei Artist scholarship, and Taiwan Dong-Sung Cultural Foundation scholarship.

A graduate of the Curtis Institute of Music, Chen studied for nine years with legendary pianist and teacher Eleanor Sokoloff. She recently completed a Master of Music degree at the Yale School of Music, and is currently a Doctor of Musical Arts candidate and Graduate Teaching Assistant at the Eastman School of Music, where she studies with Professor Douglas Humpherys.