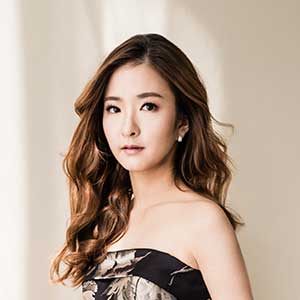 Applauded by The Strad for her “fiery virtuosity” and “consummate performances,” violinist YooJin Jang is a winner of the 2017 Concert Artists Guild Competition and First Prize winner of the 2016 Sendai International Music Competition. These victories have resulted in a busy itinerary of international recital and concerto engagements and also the release of two new recordings for the dynamic young talent lauded by the Boston Musical Intelligencer as being “a performer without fear or technical limitation.”

Recent and forthcoming concerto performances include appearances with the symphony orchestras of Columbus, Chautauqua, Dubuque, and Roswell. In recital, highlights include YooJin’s recent Carnegie Hall debut and concerts at Jordan Hall and the Isabella Stewart Gardner Museum in Boston and the Dame Myra Hess Memorial Concert series in Chicago. A passionate chamber musician, YooJin has performed with Caramoor’s Rising Stars and toured with Musicians from Ravinia’s Steans Music Institute and Musicians From Marlboro.

In 2017, YooJin released two albums: live performances of the Mendelssohn and Stravinsky Violin Concertos with the Sendai Philharmonic Orchestra and Junichi Hirokami and a recital disc featuring music of Mendelssohn, Stravinsky, Grieg, and Sibelius with pianist Kae Ozawa. Her first album, Korean Young Musicians, was released on the KBS (Korean Broadcast System) label, in cooperation with Aulos media & KBS Classic FM. She is also regularly heard on the radio, including a recent appearance on WQXR’s McGraw Hill Young Artists Showcase.

YooJin is a co-founder of The Kallaci String Quartet, which made its international debut at the Kumho Art Hall in Seoul, Korea and the Seoul Spring Festival of Chamber Music. Recognized for her creative work in chamber music, she won the 2011 Borromeo String Quartet Guest Artist Award, and in 2009 she was awarded the Schloss Weikersheim Scholarship as part of the London String Quartet Competition. YooJin has also participated in the Marlboro and Ravinia Festivals, where she worked with artists such as Menahem Pressler, Dénes Várjon, and Peter Wiley.

YooJin holds a Bachelor of Music from The Korean National University of Arts, where she studied under Nam Yun Kim. She earned a Master of Music, Graduate Diploma, and Artist Diploma from New England Conservatory, as a student of Miriam Fried; and she is currently pursuing a Doctor of Musical Arts at NEC.