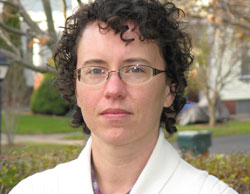 Holly Watkins received her PhD in musicology from the University of California, Berkeley in 2004, after completing an MA in musicology and a BA in physics at the University of Virginia. She is the author of Musical Vitalities: Ventures in a Biotic Aesthetic of Music (Chicago, 2018; series on New Material Histories of Music) and Metaphors of Depth in German Musical Thought: From E. T. A. Hoffmann to Arnold Schoenberg (Cambridge, 2011; series on New Perspectives in Music History and Criticism). Her articles on Romantic and modernist aesthetics, ecocriticism, and intersections between music and philosophy have appeared in such venues as the Journal of the American Musicological Society, 19th-Century Music, New Literary History, Women and Music, Opera Quarterly, New Centennial Review, and Contemporary Music Review. She has presented numerous papers at the annual meetings of the American Musicological Society as well as at conferences ranging from the yearly conventions of the Modern Language Association and the International Association for the Study of Popular Music to the meetings of the Music Theory Society of New York State and the Look and Listen Festival in New York City.

In 2014-15, Watkins received an ACLS Fellowship to support the writing of Musical Vitalities, and in 2010-11, she held a Harrington Faculty Fellowship at The University of Texas at Austin. In summer 2010, she participated in the Mannes Institute on Musical Aesthetics in Chicago. Her work has also been funded by the nationally competitive Alvin H. Johnson AMS 50 Dissertation Fellowship, the Mabelle McLeod Lewis Memorial Fund, the Townsend Center for the Humanities at UC Berkeley, and Phi Beta Kappa. Her current research and teaching interests center on Romanticism, the aesthetics and philosophy of music, ecocriticism, and posthumanism. In a former life, she enjoyed studying the principles of quantum theory and performing as the lead guitarist in an improvisational grunge-funk trio.