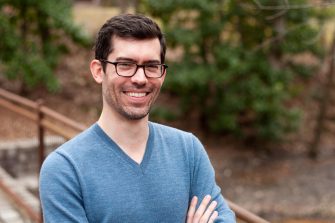 Steve Danyew’s music has been hailed as “startlingly beautiful” and “undeniably well crafted and communicative” by the Miami Herald, and has been praised as possessing “sensitivity, skill and tremendous sophistication” by the Kansas City Independent.

Danyew (b. 1983) is the recipient of numerous national and international awards for his work, and his compositions have been performed throughout the world in venues such as the Sydney Opera House, the Kennedy Center, Carnegie Hall, and the steps of the US Capitol. Danyew’s recent work Into the Silent Land was named the winner of the 2019 Walter Beeler Memorial Composition Prize. Three of his compositions for wind band are featured in Volume 11 of Teaching Music Through Performance in Band (GIA).

In addition to composing, Danyew is a passionate educator who teaches courses focused on helping young musicians craft their own creative careers at the Eastman School of Music’s Institute for Music Leadership. He is the contributing author for the 2nd edition of Ramon Ricker’s book Lessons from a Street-Wise Professor: What You Won’t Learn at Most Music Schools (Soundown, 2018). He is also a frequent guest composer and lecturer at schools through the United States.

Danyew grew up in New England, playing the saxophone and improvising music on the piano. After a performance of his own work, the South Florida Sun Sentinel proclaimed him a “saxophone virtuoso par excellence, making the instrument sing as well as shout.” Danyew performed as a saxophonist in the University of Miami Wind Ensemble under the direction of Gary Green, and this formative experience led him to begin composing works for wind band.

Danyew received a B.M., Pi Kappa Lambda from the Frost School of Music at the University of Miami and holds an M.M. in Composition and Certificate in Arts Leadership from the Eastman School of Music. Additionally, Danyew has served as a Composer Fellow at the Yale Summer Music School with Martin Bresnick, and as a Composer Fellow at the Composers Conference in Wellesley, MA with Mario Davidovsky.

Danyew self publishes much of his catalogue, though several of his works are published by Augsburg Fortress Press, Colla Voce Music, and Keyboard Percussion Publications.