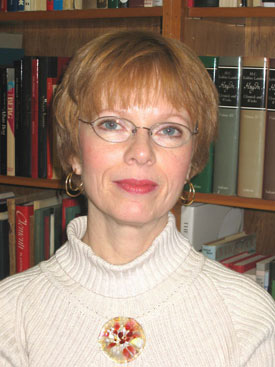 Marie Rolf is Senior Associate Dean of Graduate Studies and Professor of Music Theory at the Eastman School of Music. Under her leadership, new graduate degrees in Contemporary Media and Film Composition, Early Music, and Opera Stage Directing, and diploma and certificate programs in the Art of Improvisation, Early Music, Orchestral Studies, Pedagogy, Ethnomusicology, and Sacred Music have been developed and implemented. In addition, she chairs the interdepartmental committees that oversee all graduate curricula and policies at Eastman, and grants well over 6.5 million dollars of scholarship in graduate awards annually. New degrees as well as diploma and certificate programs are currently under discussion. Rolf also oversees all faculty searches at Eastman in addition to bearing responsibility for the oversight of Sibley Music Library. She served as Chair of the Theory Department from 1990 to 1995, during which time the MA in Theory Pedagogy, among other initiatives, was developed and first offered.

Rolf is best known for her scholarship on French composer Claude Debussy, but her research interests range from analysis and performance, keyboard skills, and the music and manuscripts of Debussy and Mozart, to the pedagogy of music theory. Her articles and reviews appear in the Cahiers Debussy, Intégral, the Mozart Jahrbuch, Music Theory Spectrum, The Musical Quarterly, Nineteenth-Century Music, and MLA Notes, among other journals, and she has authored chapters in books such as Rethinking Debussy, Berlioz and Debussy: Sources, Contexts and Legacies, Debussy and His World, Debussy Studies, and Haydn Studies. Rolf is the only American member of the editorial board for the critical edition of Claude Debussy’s works, the OEuvres complètes de Claude Debussy, published by Durand in Paris. She is the editor of Debussy’s orchestral masterpiece La Mer as well as a volume of early songs (composed ca. 1882–87). Professor Rolf recently brought to light an “unknown” early song, “Séguidille,” which she published with Durand in 2014. In 2004, she authenticated another early song by Claude Debussy entitled “Les Papillons” and published a monograph, facsimile, and transcription of it with the New York Public Library. She is also the editor-arranger of Mozart’s Rondo for Horn in E-flat, KV 371, published by Bärenreiter, which is the first edition of the work that incorporates the sixty new bars of music brought to light in 1991 by Rolf.

Professor Rolf has lectured in London, Paris, Tours, Geneva, Melbourne, Montreal, and throughout the United States. She has received research grants from the National Endowment for the Humanities and the American Council of Learned Societies, and she regularly serves as a reviewer of articles and grant applications for the NEH and various journals. In addition, she has concertized as a pianist, collaborating with musicians such as Marcia Baldwin, Jan DeGaetani, Robert Spillman, Charles Castleman, Millard Taylor, and Francis Tursi.

Supervised, chaired, and/or participated as a committee member on over 30 faculty and staff searches at Eastman

Chaired or participated as a member of well over 50 committees on academic policy, curriculum, initiatives, awards and prizes, Sibley Music Library, institutional advancement, and the like