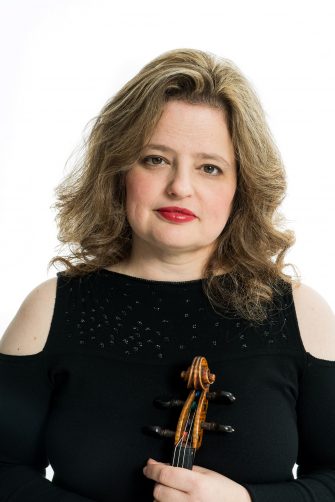 Sample live performances from students in the studio of Renée Jolles:

Renée Jolles, violinist, enjoys an eclectic career as soloist and chamber artist specializing in a wide variety of styles from the Baroque to the contemporary. Hailed as a “real star” by The New York Times for her New York concerto debut in Alice Tully Hall, she has premiered hundreds of works, including the American premiere of Schnittke’s Violin Concerto No. 2. Ms. Jolles is a member of the Jolles Duo (harp and violin), Continuum, Intimate Voices, the Bedford Chamber Players (with Baroque harpsichordist Anthony Newman), the New York Chamber Ensemble, and is a concertmaster of the world-renowned, Grammy Award-winning, conductorless Orpheus Chamber Orchestra.  She has performed in major concert halls throughout Europe, Asia, North and South Americas. Honored to be a featured soloist in three world premieres in live broadcasts from Carnegie Hall as part of the Orpheus “New Brandenburg” commissions, she can be heard in these performances on the WQXR website.  She has performed at festivals such as Marlboro, Cape May, Bowdoin International Music Festival, Suzhou Music Festival (China), Lucerne Festival (Switzerland), ISCM World Music Days (Luxembourg), Edinburgh International Festival, Caracas Festival (Venezuela),and Irkhom Festival (Uzbekistan).  Committed to recording new music, she can be heard as soloist and chamber artist on the Deutsche Grammaphon, Cambria, CRI, North/South Recordings, Albany, and New World labels.  In 2014, Ms. Jolles inaugurated The Eastman School of Music’s celebrated annual Holocaust Remembrance Concert series featuring faculty performances of neglected masterworks by composers who perished or survived during this time, and modern works based on Holocaust themes.

In 2019, Ms. Jolles was the recipient of Eastman’s Eisenhart Award for Excellence in Teaching.  Before accepting the position of Professor of Violin at The Eastman School of Music, Ms. Jolles was on the faculty of the Juilliard School, Pre-College Division, the Mannes School of Music, Preparatory Division, and the Aaron Copland School of Music at Queens College. During the summer, she is on the faculty at the Bowdoin International Music Festival, Aria Summer Music Academy, Portland Bach Festival, and Bach Virtuosi.  She has given guest master classes at major conservatories and festivals around the world, and has served as an adjudicator in competitions such as the Washington International Competition, Postacchini International Violin Competition, Walgreens National Concerto Competition, and The Juanita Miller Competition.  She earned BM and MM degrees from Juilliard, where she held teaching fellowships in Ear-Training and as assistant to Joel Smirnoff of the Juilliard String Quartet, was the winner of the Violin Concerto Competition, and was the recipient of the William Schuman Prize, the school’s highest award given to graduating Masters students. Her teachers have included Lewis Kaplan, Felix Galimir, Jacob Lateiner, and members of the Juilliard, Tokyo, and American String Quartets.