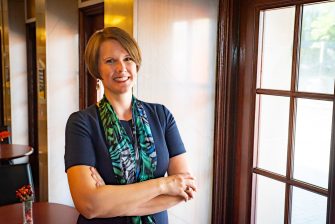 Rachel Roberts has navigated both the non-profit performing arts and higher education sectors, having held unique positions in both. In 2018, Rachel was named Associate Professor of Music Leadership and Graduate Degree Program Director, within Eastman School of Music’s Institute for Music Leadership. In this newly created faculty role, she leads the new MA in Music Leadership, which aims to support the development of a unique combination of artistic and executive skills in the preparation of music leaders. As of June 1, 2021, her role expands to also include serving as the third Director of the Institute for Music Leadership. In this role, Rachel is responsible for overseeing all Institute activities and programs, including the Catherine Filene Shouse Arts Leadership Program, the Paul R. Judy Center for Innovation and Research, and the Careers and Professional Development Office.

Prior to this faculty role, Rachel was appointed as the first Director of the Entrepreneurial Musicianship Department at New England Conservatory (NEC). She was charged with designing and leading a major new initiative to equip young musicians with key extra-musical skills to support their artistic careers. Over nine years in this role, Rachel launched a wide range of experiential programs and curricula, all of which can be read about at www.necmusic.edu/em  In the non-profit performing arts sector, Rachel served as the first Director of Strategic Planning Engagement for the Atlanta Symphony Orchestra (ASO), working on organization-wide strategic and governance objectives. She led the ASO’s grand opening festivities at the Verizon Wireless Amphitheatre at Encore Park, and instituted the orchestra’s “new traditions” during the inaugural 2008 summer series. Rachel arrived at the ASO after completing the League of American Orchestras’ Orchestra Management Fellowship program, having worked with orchestras in Aspen, Detroit, South Dakota, and Atlanta.

Rachel holds a Masters Degree in Education from the Harvard Graduate School of Education. A student of the Special Studies Program, she designed coursework to focus on leadership and organizational development, specifically to investigate the best practices for designing learning communities. Following graduation, Rachel traveled to 10 countries in Southeast Asia during summer 2015 as a participant of Harvard’s Center for Asia Leadership Initiatives socio-economic and political research trek. She was also selected to be the Fellow of Leadership Communications, and taught five-day leadership development workshops throughout the trip. An Iowa native, Rachel received a Bachelors of Music in flute performance at the Eastman School of Music, and also earned a certificate through the Catherine Filene Shouse Arts Leadership Program. Her career in orchestra management began as Artistic and Production Assistant with the Houston Symphony. Since leaving Eastman, Rachel has continued to pursue her passion for sharing music by performing with colleagues across the country, as a member of the Essimar Trio, and by serving as a Flute Faculty Member at NEC’s Preparatory School. Rachel was also an active participant in Boston Mayor Marty Walsh’s initiative to eliminate the gender wage gap. While there, she volunteered to lead 32 AAUW salary negotiation workshops, educating over 850 women throughout Boston. As member of AAUW, Rachel has spurred a university-wide partnership to bring the AAUW salary negotiation workshops to the University of Rochester community. Rachel is currently pursuing her Education Doctorate from the Warner School of Education at the University of Rochester, with a focus in higher education leadership. In her spare time, Rachel teaches women’s self-defense and trains Gracie Jiu Jitsu; is an avid runner, hiker, and kayaker; is always cooking new vegan recipes in her kitchen; and enjoys taking her Cocker Spaniel, Cocoa, on therapy dog visits throughout the greater Rochester community.