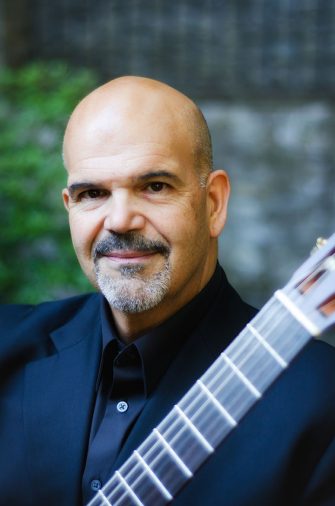 “Wit, charm, virtuosity, and depth of feeling, adding up to the humanity to which all artists should aspire.  A model of virtuosic display.  Goluses was dazzling.” New Jersey Star Ledger

Nicholas Goluses’s concert tours as soloist, with orchestra, and as chamber musician have taken him across North America, South America, Europe, Australia, and the Far East to critical acclaim.  The New York Times wrote:  “Goluses produced an elegant sound.  And the finales, taken dangerously fast, were accurate, transparent, and impressively articulated.  Mr. Goluses gave persuasive, energetic, readings.”   His many New York recitals have taken place in Merkin Hall, Weill Hall at Carnegie Hall, Alice Tully Hall and Kaufmann Auditorium at the 92nd Street Y.  Goluses has been a featured performer at major festivals throughout the world and has performed as concerto soloist with the New Jersey Symphony, Colorado Symphony, Rochester Philharmonic, American Wind Orchestra, Manhattan Symphony, Louisiana Sinfonietta, Jacksonville Symphony, Eastman Virtuosi, Heidelberg Symphony, Savannah Symphony, Guanajuato Symphony, Rochester Chamber Orchestra, Eastman Philharmonia, the Los Angeles Philharmonic, and the Macon Symphony among others.  He enjoys an active duo with flutist Bonita Boyd and has collaborated with the American and Ying String Quartets, violinists Zvi Zeitlin and Juliana Athayde and tenors Robert Swensen and Anthony Dean Griffey.  His recent concert activity is highlighted by a concert tour of China, comprising 23 cities throughout the country, as well as concerts in Belgium, Ireland, and throughout the US.

Nicholas Goluses is Professor of Guitar at the Eastman School of Music, where he is recipient of the Eisenhart Award for Excellence in Teaching.  Before coming to Eastman he held the Andrés Segovia Faculty Chair at Manhattan School of Music where he received the Doctor of Musical Arts degree, and was the recipient of the Pablo Casals Award and the Faculty Award of Distinguished Merit.  His students have won major awards and competitions throughout the world including Darwin (Australia), Allentown, GFA, D’Addario, MTNA, Appalachian, Taxco (Mexico), Rantucci, Rosario, Stotsenburg, Paracho (Mexico), Brock (Canada) World Competition, Philadelphia Guitar Society, Lone Star Competition, Louisville Competition, Memphis Competition, Harvard Foote Prize, Hamilton, Belgium, Fulbright, CAPES (Brazil) and a Grammy.  In addition his students hold numerous professorships throughout the US, Australia, Mexico, Canada, Brazil, England, Taiwan, and Germany.  Prof. Goluses is in great demand for master classes at leading institutions throughout the world.

Goluses has recorded for Linn, Naxos, Albany, BMG, Nueva Venecia Records.  His recordings have received wide critical and audience acclaim; for his CD of sonatas of Johann Sebastian Bach the Cleveland Plain Dealer wrote: “Played with masterly control of form and substance’; of his CD of late guitar works of Fernando Sor, Fanfare wrote: “Nicholas Goluses plays superlatively” and Classical Guitar (London) wrote “his performance compels the highest praise.”  He has recorded two duo CDs with flutist Bonita Boyd for Albany Records (Chronicles of Discovery and Quicksilver), and Night Strings with violist George Taylor.  His newest solo CD, “From Afar”, with works by Britten, Schwantner, Ponce, Falla, and Theodorakis was reviewed by American Record Guide, “Goluses is masterly.  He is a musician’s musician.”  His 2018 CD for Linn Records of the music of Samuel Adler features Maestro Adler’s Concerto for Guitar and Orchestra with the Eastman Philharmonia Chamber Orchestra conducted by Neil Varon, Ports of Call with Juliana Athade and Renée Jolles, violinists, Into the Radiant Boundaries of Light with violist Phillip Ying, and Five Choral Scherzi with the Eastman conducted by Bill Weinert.

Committed to performing new music for the guitar, Goluses has given world première performances of over 100 works, including solo pieces, concertos for guitar and orchestra, as well as chamber music by many of today’s leading composers.  His performance editions are published by Alfred Masterworks.

He is a member of the National Academy of Recording Arts and Sciences, has served on the Board of Directors for the Guitar Foundation of America and has been named Musician of the Year by Mu Phi Epsilon.  He is the recipient of the 2019 Manhattan School of Music Distinguished Alumni Award.  He has recently been named to the Fulbright International Specialist Award roster 2019-2024.