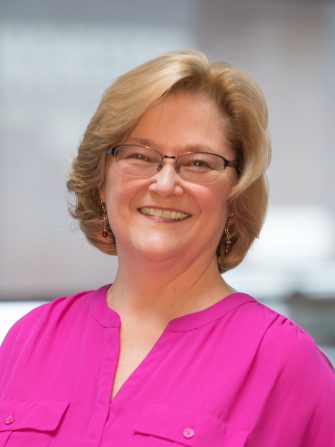 Elizabeth West Marvin is Professor of Music Theory and Minehan Family Professor at the Eastman School of Music. She holds a secondary appointment in the University of Rochester’s Brain and Cognitive Sciences Department. At Eastman, Marvin previously served as Dean of Academic Affairs (2000-2004), Acting Senior Associate Dean of Graduate Studies in 2016, and as department chair (1996-2000; 2016-2018), during which time she oversaw major curricular changes in both the undergraduate and graduate theory curricula. From 2000-2005, she held an affiliate appointment in Eastman’s voice department, where she earned a Performer’s Certificate in Voice while a student.

Dr. Marvin is the 2012 recipient of the Gail Boyd de Stwolinski Prize for Teaching and Research in Music Theory Pedagogy (a national lifetime-achievement award). In 2003, Marvin completed her term as national President of the Society for Music Theory, which she served previously as member of the Executive Board, Editorial Board, Newsletter editor, and committee member. She is also former President, Vice President, and Program Chair for the Music Theory Society of New York State.

Professor Marvin’s research interests are diverse: she has published in the areas of music cognition, music theory pedagogy, theory and analysis of atonal music, contour theory, history of theory, and analysis and performance. In 1993, she was recipient of the SMT Young Scholar Award for “The Perception of Rhythm in Non-Tonal Music,” Music Theory Spectrum 13 (1991). In 2005, she received a University of Rochester Bridging Fellowship to study with faculty in the University’s Brain and Cognitive Sciences Department, where she continues to research music cognition. Dr. Marvin’s articles and reviews appear in numerous journals, including Music Perception, Music Theory Spectrum, Journal of Music Theory, Theory and Practice, and others. Marvin is co-editor of Concert Music, Rock, and Jazz Since 1945: Essays and Analytical Studies, published by the University of Rochester Press. She has completed three undergraduate theory textbooks for W. W. Norton: A Musician’s Guide to Theory and Analysis (3rd edition, 2016) with Jane Clendinning; A Musician’s Guide to Aural Skills (3rd edition, 2016) with Clendinning, Joel Phillips, and Paul Murphy; and A Musician’s Guide to Fundamentals (3rd edition, 2017) with Clendinning and Phillips.

A Generalized Theory of Musical Contour: Its Application to Melodic and Rhythmic Analysis of Non-Tonal Music and its Perceptual and Pedagogical Implications, Ph.D. dissertation, University of Rochester, 1988. (Advisor: Robert Morris)

“Exploring Ternary Form through the Lens of Analysis-Performance in a Mozart Aria,” in Routledge Companion to Music Theory Pedagogy (ed. Leigh VanHandel). (forthcoming 2019).

“Innovative Ideas for the Undergraduate Curriculum: Music Theory” Proceedings of the 77th Annual Meeting 2001, National Association of Schools of Music, No. 90 (July 2002).

“Music Theory Research and Curricula: Past, Present, and Future” Proceedings of the 75th Annual Meeting 1999, National Association of Schools of Music, No. 88 (June 2000).

“The Effect of Modulation and Formal Manipulation on Perception of Tonic Closure by Expert Listeners,” Music Perception 16/4 (1999): 389-408. Primary author; co-authored with Aleck Brinkman.

“A Generalization of Contour Theory to Diverse Musical Spaces: Analytical Applications to the Music of Dallapiccola and Stockhausen,” Concert Music, Rock, and Jazz since 1945: Essays and Analytical Studies,Elizabeth West Marvin and Richard Hermann, eds. (Rochester, NY: University of Rochester Press, 1995), 135-71.

“Intrinsic Motivation and the Relation of Analysis to Performance in Undergraduate Music Theory Instruction,” Journal of Music Theory Pedagogy 8 (1994): 47-57.

“The Effect of Sex Differences on Recognition of Melodic Transformations,” Proceedings of the European Society for the Cognitive Sciences of Music, Third International Music Cognition and Perception Conference,Liège, Belgium (1994): 449-50.

“The Perception of Rhythm in Non-Tonal Music: Rhythmic Contours in the Music of Edgard Varèse,” Music Theory Spectrum 13 (1991): 61-78. [Winner of the 1993 Society for Music Theory Young Scholar Award.]

“Tonpsychologie and Musikpsychologie : Historical Perspectives on the Study of Music Perception,” Theoria 2 (1987): 59-84.

“In their Own Words:  Analyzing the Extents and Origins of Absolute Pitch.” Co-authored:  Elizabeth Marvin, Joseph VanderStel, Joseph Siu (forthcoming, Psychology of Music).

Review of Jeanne Bamberger, The Mind Behind the Musical Ear: How Children Develop Musical Intelligence,Journal of Musicological Research 15 (1995): 113-148.

Review of David Butler, The Musician’s Guide to Perception and Cognition, solicited by Journal of Music Theory Pedagogy 7 (1993): 119-26.

Review of Eugene Narmour and Ruth Solie (ed.), Explorations in Music, the Arts, and Ideas (Festschrift in honor of Leonard B. Meyer), Current Musicology 49 (1992): 54-65.

Review of John A. Sloboda, The Musical Mind: The Cognitive Psychology of Music, Journal of Music Theory Pedagogy 2 (1988): 163-72.

“In their Own Words:  Analyzing the Extents and Origins of Absolute Pitch”

“What I Know Now:  Reflections on Music Theory Pedagogy”

“Pitch-Class Distribution and the Perception of Key,” co-authored with David Temperley

“The Mystery and Science of Absolute Pitch,”

“Absolute Pitch Perception and the Pedagogy of Relative Pitch,”

“The Effect of “Chroma” and Context on Tonic Key Identification,” invited paper for the Second International Symposium of the Psychology of Music, Freiburg, Germany (September 1996). Co-authored with Alexander R. Brinkman

“A Generalization of Contour Theory to Diverse Musical Spaces”

“The Perception of Rhythm in Non-Tonal Music: Rhythmic Contours in the Music of Edgard Varèse”

“Anton Webern as Poet and Composer: Text and Music in the Three Orchestral Songs (1913/14)”

“Music Theory Research and Curricula: Past, Present, and Future” invited paper presented at the annual meeting of the National Association of Schools of Music, Chicago (November 1999)

“Using the Tools to Teach the Tools: Multimedia Programming for CAI and Cognitive Research.” Co-authored with Alexander R. Brinkman

“Research in Music Cognition: What Implications for Music Theory Pedagogy?”

“Development of an Aural Skills Curriculum for a School of Music,” invited paper for the Oberlin College Conservatory of Music (December 1993)

Panelist, Committee on the Status of Women, speaking on university policies on sexual harassment, Baltimore (2007)

At the Eastman School of Music, I have taught at all levels of the undergraduate curriculum, including a number of years as designer/coordinator of a three-year aural skills program. At the graduate level, I have taught Pedagogy of Music Theory, Analysis and Performance, Analysis of Tonal Music (TH 401), Analysis of Non-Tonal Music (TH 402), and doctoral seminars in Music Cognition. In 2007, I designed a new introductory course in music cognition, “Music and the Mind, that will be taught at the University’s River Campus and the Eastman School in alternating years.

Jenine Lawson, “Pitch Expectancy in Serial Compositions Using the Derived Rows and the Trichordal Array: An exploration into the music of Anton Webern,” 2014

Nancy Rogers, “The Role of Verbal Encoding in Musical Memory,” 2000

Sarah Bibyk (PhD, Brain & Cognitive Sciences) –  A Rise by Any Other Name: An Investigation of the Production and Comprehension of Rising (and Falling) Intonational Contour (Advisor: Michael Tanenhaus), chair of defense committee, 2016.

Christopher Bartlette, “A Study of Harmonic Distance and its Role in Musical Performance,” in progress (Advisor: Davy Temperley,Theory Department)

Robert Gardner, “The Development of a Theoretical Model to Predict Attrition, Turnover, and Retention of K-12 Music Teachers in the United States,” in progress (Advisor: Louis Bergonzi, Music Education Department)

Daphne Leong, “A Theory of Time-Spaces for the Analysis of Twentieth-Century Music: Applications to the Music of Bela Bartok,” 2000 (Advisor: Robert Morris, Composition and Theory Departments)

Daphne Leong, “A Theory of Time-Spaces for the Analysis of 20th Century Music: Applications to the Music of Bela Bartok, ” 1998 (Advisor: Robert Morris)

Nicole Marane, “The Influence of Tango on the Music of Pamela Decker,” lecture-recital (2010)

Richard Masters “For All the World to Admire: The Folk-Song Settings of Percy Grainger,” lecture-recital (2008)

Musica Nova: concert in honor of the 50th anniversary of the death of Anton Webern- Dehmel Lieder with Bob Wason, piano (September 1995)

Conference Paper Mentor, Committee on the Status of Women, 2005-07

Society for Music Perception and Cognition and Affiliated Societies

Consultant on revisions to the theory curriculum, Rutgers University, 1999