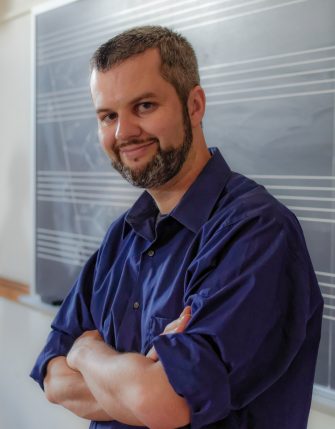 Equal parts educator, composer, and performer, Matt Curlee has taught in the Department of Music Theory since 2007.   As an advocate for, and avid practitioner of improvisational music, Curlee has a particular interest in ear-brain interactions and the intuitive processes that unify composition, improvisation, and performance.  This area of study has fed directly into his work at Eastman, where he has designed advanced skills curriculum for the undergraduate honors theory program and for graduate conductors, and has worked with many populations of students to develop real-time cognitive skills for performance.

As a composer, Curlee’s recent work has focused on the interplay between modern physics and cosmology, and the arts.  Notable among these projects, Histories is a continuing set of collaborations with physicist Regina Demina (UR/CMS experiment at CERN), musically exploring the fundamental narratives, at various scales, that form the fabric of reality. Recent commissions have included works for the U.S. Air Force Band, the Eastman Percussion Ensemble, RPS Collective, and many other solo performers, ensembles, and collaborators of all kinds, including visual artists, dancers, animators, scientists, and filmmakers.  Recent performances have spanned three continents, and his setting of Charlotte Perkins Gilman’s seminal short story “The Yellow Wallpaper,” created in collaboration with theatrical percussionist Nikki Joshi, was recently produced as a short film in association with the Rebanks Family Foundation.

In 1995, as an undergraduate at Eastman, Curlee was one of the youngest organists ever to win the prestigious Grand Prix de Chartres.  After several years of touring in the US and Europe, appearances with orchestras, inaugural performances on new instruments, and two releases as a solo artist, he began to gravitate towards artistic collaborations. In 2002, with four other Eastman alums, he founded Neos, a contemporary jazz chamber ensemble built around the pipe organ.  Neos toured and recorded for several years, Curlee serving as its artistic director and principal composer, and ran a commissioning program that generated new music from other composers around the world.  As a two-time graduate of the school and eventual faculty member, Curlee is proud to call Eastman his musical “home town.”