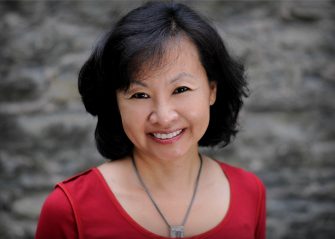 Award-winning cellist Margery Hwang performs frequently as a recitalist and chamber musician. She was a founding member of the Franciscan String Quartet, First Prize winner of the Banff International String Quartet Competition and top prize winner of the Evian International String Quartet Competition. The Quartet performed in concert halls throughout North America, Europe and Asia, including Weill Recital Hall at Carnegie Hall, the Concertgebouw in Amsterdam and Casals Hall in Tokyo. The Quartet held the position of Wardwell Fellows at the Yale School of Music and was Quartet-in-Residence at the Hopkins Center at Dartmouth College, where Ms. Hwang was on the faculty of the Department of Music. She has recorded for Verdi Records. She has also performed with the Tokyo, Ying, Colorado and Ciompi Quartets as well as Raphael Hillyer, Laurence Lesser and Michael Tree.  She was a member of the Peabody Trio, winners of the Naumburg Chamber Music Award.  As a soloist, Ms. Hwang has performed with the Beijing Philharmonic, the Los Angeles Philharmonic, and the San Francisco Chamber Orchestra.  A native of Los Angeles, she received the Master’s Degree at the San Francisco Conservatory of Music and the Bachelor’s Degree with Distinction at the New England Conservatory of Music. She was a founding member of the Cello Divas and Quartos and has appeared in the festivals of Aspen, Banff, Norfolk, Roycroft, Skaneateles, Yellow Barn and with the Craftsbury Chamber Players. Ms. Hwang is currently an Assistant Professor of Chamber Music at the Eastman School of Music and a founding member of the Amenda Quartet.  She is Co-Artistic Director of Yellow Barn’s Young Artists Program, Artistic Director of If Music be the Food…, a chamber music series benefiting Rochester’s Foodlink and serves on the Board of Trustees of Chamber Music America and the Hochstein School of Music and Dance. In 2017 she was honored with a Philanthropy Award from the Rochester Area Community Foundation.