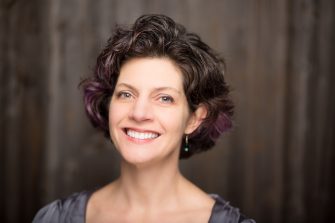 Ms. McCormick was a member of the Rochester Philharmonic’s double bass section from 1995-2017. Before joining the RPO, she held positions with regional orchestras such as the Erie (PA) Philharmonic, and substituted with other major orchestras. After losing her hearing in 2017, she began a career shift into arts administration and nonprofit leadership. Since 2018, she has been the inaugural Program Manager of Eastman Performing Arts Medicine (EPAM), a collaborative program of the University of Rochester Medical Center and the Eastman School of Music. EPAM seeks to enhance the lives of our community through the many intersections of arts and healthcare.

Teaching students of all ages is a significant part of Gaelen’s life. She was a faculty member (double bass) of Nazareth College (2010-2017) and joined the Eastman Community Music School in 2001. As a member of the Arts Leadership Program at the Eastman School of Music, she teaches career skills for use on- and off-stage. Since 2014, she has been organizing and teaching the Rochester Bass Retreat, a workshop for all ages of players and genres of bass playing. Gaelen has given masterclasses and recitals at Ithaca College, Williams College, the College of St. Rose, and Roberts Wesleyan College. She is a regular clinician at the New York State School Music Association’s Winter Conference and at the International Society of Bassists biennial conventions.

Her three-book series on double bass bow pedagogy, Mastering the Bow, is published by Carl Fischer. Her first book of duet compositions titled Double Trouble will be released in the 2019-20 academic year. She is a member of the Board of Directors of the International Society of Bassists (ISB), and is the editor of the teaching column in the ISB’s Bass World magazine.

Gaelen has been involved in arts advocacy, and proudly represented the RPO in the International Conference of Symphony and Opera Musicians.  She is honored to be a member of Phi Kappa Phi and Pi Kappa Lambda, groups recognizing and supporting excellence in the humanities.  Since becoming a late-deafened adult, she now adds disability advocacy to her agenda of presentations around the US.