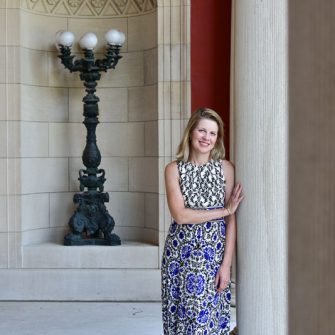 Coordinator of the Certificate of Achievement in Chamber Music

A native of Montana, pianist Elinor Freer has built a versatile career as soloist and chamber musician, performing across the United States, Europe, and China. In Europe, Ms. Freer has given multiple performances at The Concertgebouw in Amsterdam and appeared at the Valery Gergiev Festival in Rotterdam. Other highlights include recordings for Dutch radio, performances at the International Musicians’ Seminar in Prussia Cove, England, and concerts at Moscow’s Gnessin Institute. She was also one of two American pianists selected to perform throughout China in tours designed to promote cultural relations. Ms. Freer has been featured as soloist with numerous orchestras including the String Orchestra of the Rockies, the Brevard Music Center Orchestra, the University of Rochester Chamber Orchestra, the Dekalb Symphony, the Southeastern Kansas Symphony, the Kingsport Symphony, and many others. She is also a frequent performer at festivals such as Summer Music in Harrisburg, PA, the Festival de Música de Cámera in Mexico, the Bowdoin Music Festival, the Lake Winnipesaukee Music Festival, and Music in the Vineyards in Napa Valley. Ms. Freer has been a laureate and prizewinner in competitions such as the Joanna Hodges International Competition and the American Pianists Association, and has held piano fellowships at the Steans Institute/ Ravinia Festival and the Tanglewood Music Center. She holds degrees with honors from the Cleveland Institute of Music and the University of Southern California and was awarded a Performer’s Diploma from the Hogeschool voor de Kunsten Utrecht in the Netherlands. A dedicated teacher, Ms. Freer was previously appointed to the piano faculties of Fort Hays State University and the University of Missouri, and in 2003 joined the faculty of the Eastman School of Music. She also previously served as Co-Artistic Director of the Skaneateles Festival in Central New York for 10 years. In addition to performing and teaching, Ms. Freer has founded and produced a number of initiatives designed to bring classical music to new audiences and has presented a variety of educational and outreach performances across the country in settings ranging from inner city schools to psychiatric hospitals. For these projects she was awarded multiple grants from the National Endowment for the Arts.