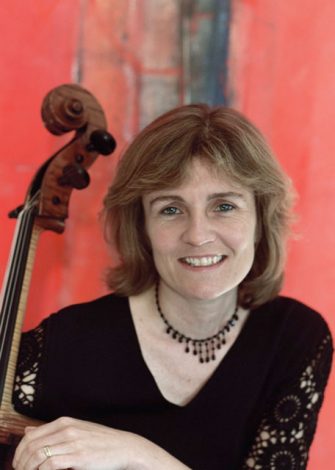 Rosemary Elliott, Assistant Professor of Cello at the Eastman School of Music, has an active performing schedule as both an orchestral and chamber musician. As principal cellist of the Cayuga Chamber Orchestra in Ithaca, New York she also serves on the artistic advisory board of that organization. Ms. Elliott is a core member of the orchestra’s chamber music ensemble and has twice performed as soloist with the orchestra. Since 2005, she has been artistic director of ‘Morning Chamber Music’ at the Eastman School. The series is dedicated to introducing new audiences to chamber music through varied programming at a popular morning time.

Prior to her appointment at Eastman Ms. Elliott was a member of the cello staff at the Royal College of Music, in London, (1994-1998) and performed regularly with some of most notable chamber orchestras including the London Mozart Players, the City of London Sinfonia, and the Orchestra of St. John’s Smith Square. She has also been a member of the National Symphony Orchestra of Ireland and toured with the Halle Orchestra of Manchester, England.

For over 10 years, Ms. Elliott has been a member of the performing and teaching staff at the Heifetz Institute. She has also taught for close to twenty years at the Bowdoin International Music Festival and participated in the Skaneateles, Icicle Creek Chamber Music festivals, the International Musician’s Seminar in Cornwall, England, and the Kerry Chamber Music Festival in Ireland. Most recently, Ms. Elliott was an instructor at the virtual Vivace Matera online cello festival. She currently teaches students at every level of playing, from beginner to Doctoral candidates and is committed to fostering a love of music and developing each student’s expressive range regardless of age or stage.