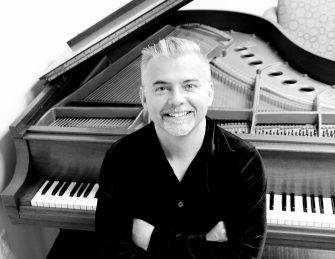 English pianist Andrew Harley enjoys an internationally recognized performing and teaching career. Specializing in instrumental chamber music and song literature, he has been heard in live radio and television broadcasts, on numerous recordings, as well as at venues such as Carnegie Hall, Wigmore Hall, Purcell Room, Kennedy Center, Library of Congress, and the Supreme Court of the United States.

Dr. Harley began his early musical education at the renowned Chetham’s School of Music, continuing his studies at Oxford University, the Royal Northern College of Music, and the University of Southern California. Since immigrating to the United States, Dr. Harley has held faculty positions at The Juilliard School, the University of Southern California and the University of North Carolina. His summer affiliations include Director of Chamber Music for the International Institute for Young Musicians, the Music Academy of the West in Santa Barbara, the Vancouver International Song Institute (VISI), and The Aspen Music Festival and School. As a guest artist, he has taught and given master classes at The New England Conservatory, Indiana University Bloomington, the Royal Northern College of Music, Chapman University, and the Folkwang University of the Arts in Essen, Germany, where he served as Visiting Guest Faculty in Accompanying.

In June 2018, together with J’Nai Bridges and Susanna Phillips, Dr. Harley gave the East Coast premiere of The Long View: A Portrait of Ruth Bader Ginsburg in Nine Songs by Patrice Michaels. In 2019, he released a recording of the complete sonatas for Piano and Violin by Brahms with Eastman alumnus, John Fadial. Fanfare Magazine praised it as “a remarkable recording … a superb interpreter … effortless in technique, eloquent in expression … the Brahms violin sonatas could hardly be bettered to display what collaboration means.” A recording of four-hand works by Schubert and Brahms is scheduled for release in 2021. Dr. Harley has recently been invited to be the National Conference Master Clinician for the National Association of Teachers of Singing in June 2020. Dr. Harley currently serves as a member of the Eastman Piano Faculty, as well as Director of the Piano Accompanying and Chamber Music Degree Program.