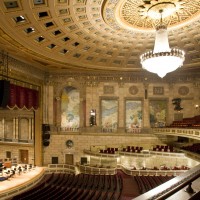 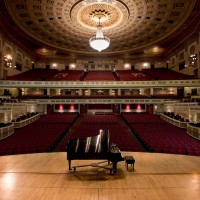 Since its opening in 1922, the Eastman Theatre has always been Rochester’s preeminent performance space. Throughout its history, Eastman students have frequently shared the stage with some of the world’s greatest musicians: conductors Leonard Slatkin, Sir Georg Solti, and Christoph von Dohnányi; composers Igor Stravinsky, Krzysztof Penderecki, and John Williams; and jazz musicians Bob Brookmeyer, Stan Getz, and Keith Jarrett, to name only a few. All Eastman students have the opportunity to perform in this historic venue, often alongside visiting artists, and to attend frequent performances by notable guest musicians and ensembles.

The magnificent theatre, which originally contained 3,352 seats, was built by George Eastman as a center for music, dance, and silent film with orchestral and organ accompaniment. An architectural gem, its opulent décor reflects the taste and elegance of the 1920s. Today, it is the primary concert hall for the Eastman School’s larger ensembles, including its orchestras, wind ensembles, jazz ensembles, and chorale. The Eastman Opera Theatre presents fully staged operatic productions in the Theatre each spring. It also is the principal hall for the Rochester Philharmonic Orchestra, and is used periodically throughout the year by a variety of community organizations for concerts, lectures, and other special events.

In 2004, the first phase of a major renovation project to the Eastman Theatre was completed to replace the stage and improve acoustics for concerts, opera, and other performances.

In 2007, plans were announced for additional renovations to the theatre and the construction of a new building for teaching and performance spaces. The theatre renovations were completed in the fall of 2009, and the hall reopened in October of that year as Kodak Hall at Eastman Theatre. Work on the theatre included reducing the number of seats to allow wider aisles, the addition of box seats, and the expansion of the lobby.

The new building, known as the Eastman East Wing, officially opened in December 2010. The new building, adjacent and connected to the theatre, features the 222-seat Hatch Recital Hall, faculty teaching studios, a rehearsal room, a recording studio, and the Wolk Atrium, which is illuminated by a Dale Chihuly blue-and-gold chandelier.

← Back to performance halls