A Rhapsodic Return to Eastman for Carter Pann ‘94E 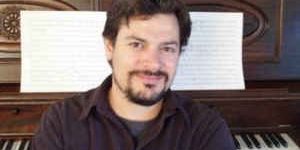 In the early 1990s, when Carter Pann and Marina Lomazov were both pianists in the studio of Professor Barry Snyder, they probably never suspected that one of them would end up writing a piece that would be premiered by the other.

Nearly three decades later, they have remained good friends, and also distinguished themselves in the musical world. Pann teaches at the University of Colorado at Boulder and is a much-performed American composer, a Pulitzer Prize finalist with two Grammy nominations. Lomazov, who received an Eastman bachelor’s degree in 1993 and a DMA degree in 2000, returned in 2018 to join the piano faculty.

Carter Pann returns to Eastman this week for the premiere of his Three Rhapsodies for piano, which will be performed this Saturday, December 4 in Kilbourn Hall by now-Professor of Piano Marina Lomazov. Three Rhapsodies is one of many Eastman School of Music commissions in honor of our centennial, and Marina Lomazov is enthusiastic about performing this new work.

“He is a real pianist-composer,” she says of Pann. “The music is very virtuosic, very difficult, but also utterly playable – fluid and fluent. It is framed in a contemporary idiom, but also in the tradition of piano music of Liszt, Chopin, and Rachmaninoff.”

To underscore the similarity, she decided to surround Pann’s new work with music by his 19th-century pianistic predecessors: two Études-Tableaux by Rachmaninoff, and two of Chopin’s Etudes. She has found that Chopin and Rachmaninoff, known for the mercurial moods and complex contrapuntal textures of their piano music, find a 21st-century echo in Pann’s music.

Lomazov has found many similarities and echoes of their keyboard figurations in the Rhapsodies, as well as an actual quotation from one of the Rachmaninoff etudes. For good measure, Lomazov added to her program a lighthearted but equally virtuosic “Polka” by Rachmaninoff, which Pann enjoyed hearing her perform in Professor Snyder’s studio. 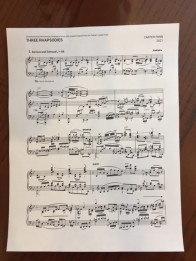 This collection of romantic, rhapsodic piano music by, in the pianist’s words, “past and present masters of the short piano piece” is framed by Schumann’s suite Kreiseriana and, to conclude, the rag The Serpent’s Kiss by William Bolcom – with whom Pann studied composition at the University of Michigan.

“I think I have an affinity for his music,” says Lomazov of Carter Pann; she has previously performed earlier works in recitals. “I am honored that he has placed his trust in me to perform his new work.”

Marina Lomazov premieres Carter Pann’s Three Rhapsodies this Saturday evening, December 4 at 7:30 p.m. in Kilbourn Hall. Three Rhapsodies was commissioned by the American Composers Forum with funding from The Thelma E. Hunter Fund.  The concert will also be livestreamed; go to the site 15 minutes before the performance.