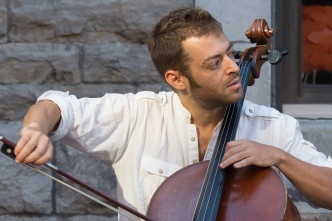 Eastman brings back its popular Barbara B. Smith World Music Series in a set of free virtual concerts this spring. Sponsored by Eastman’s Ethnomusicology program, part of the department of Musicology, guest artists representing different musical traditions from across the world will be streamed live at 3 p.m. on the last Sunday of each month this spring. Live Q&A sessions with the musicians will follow.

Jake Charkey is an acclaimed cellist with a strong background in Western classical music (at Rice University’s Shepherd School of Music) and Hindustani music. He is also an eclectic improviser, drawing from his extensive training in Eastern and Western musical traditions. He recorded and performed with many of the most celebrated musicians in Bollywood, and he is a sought-after studio recording artist in India and the United States.

You had an extensive classical training on the cello. When and how did your interest in Hindustani music begin?

Although I had been exposed to Carnatic music a little bit growing up I didn’t take a really strong interest in Indian music until I was in the music conservatory at Rice. Concerts of Indian music were regularly presented on campus, and I was fortunate to see Ali Akhbar Khan play. That concert, perhaps more than anything else I had heard, was very special for me. The musicians seemed to be making the music up on the spot, drawing from years and years of practice to be able to have the freedom to improvise. It seemed (in a good way) that they may have been playing together for the first time on that stage.

I loved that the music was a solo music, that it had a visceral effect on me, and that it seemed both serious and informal in its presentation (it lasted about four hours if I remember, and audience members wandered in and out for tea breaks — a novelty for me!). 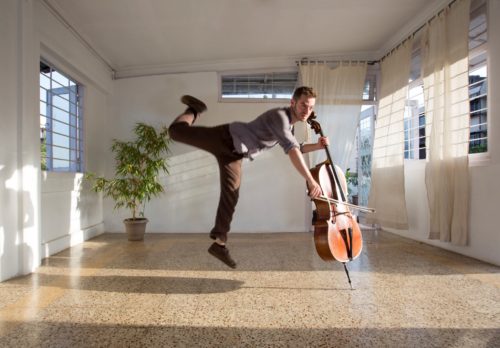 Music with “a visceral effect”: photograph of Jake Charkey by Sahil Mane.

In many ways it was the contrast with the orchestral tradition that drew me in … it was improvised, solo, deeply rooted in tradition, but very much about the individual musician’s voice and feeling for a raga in the moment. I was hooked. (Raga are scales or modes used in Indian music as a basis for improvisation.)

Hindustani music is basically an oral tradition. My guru, Dr. N. Rajam, spoke and explained very little. Lessons were an exercise in listening and repetition, call and response, imitation. It is similar to the way a child acquires language; one learns words, then simple sentences, and eventually complex ideas can be expressed through combinations. It is a very methodical but also intuitive method of pedagogy. The main emphasis is on the syntax of the music, with less attention paid to the technique of playing a specific instrument.

The focus is on the internalization of raga, which is more than mode because it also includes ornamentation, pitch hierarchy, and melodic patterns. We do a great deal of scale practice and sequencing exercises within each raga in order to master the building blocks of improvisation. I also practice a lot with an electronic tabla (Indian percussion instrument) to strengthen my sense of working inside of a rhythm cycle. Singing is also an important part of the training. 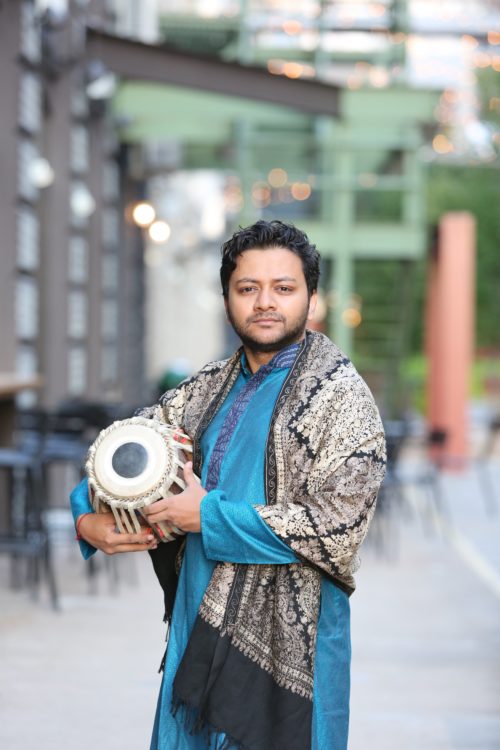 This probably will be impossible, but can you provide a very basic overview of Hindustani (Northern Indian) music in a paragraph? Is it very different from Carnatic (Southern Indian) music? Do the most common instruments have counterparts in Western music?

Hindustani music is different from Carnatic music in that it has significantly less fixed material, the majority of the music being improvised inside of the raga structure. The rhythmic concept is also quite different, perhaps in some ways looser.

North Indian music has two sides (three actually if you include dance), the melodic and the rhythmic. The common rhythm instruments in classical music are tabla and pakhawaj. All concerts are accompanied by a drone instrument, the tanpura.

Do you talk about the music between pieces?

I will give a brief description between each piece. The music is primarily improvised within the constraints of the raga. Each piece will include some fixed material, the “bandish” or song, which usually has two verses, a low one and a high one. In between improvisations I will return to this fixed composition, or a portion of it. I will be accompanied by tabla.

What can an audience member unfamiliar with the music expect to see and hear in your performance?

There is no harmony in this music. Listeners should focus on the play between melody and rhythm. The key is to understand the rhythmic cycle. People should listen for the completion of cycles and for the subtle movements and ornamentations of each raga. Each piece will begin with an alaap, or free improvisation without rhythm, and will increase in speed and range as the raga develops.

This music is not necessarily easy to follow for the Western ear. It requires some study to truly appreciate it, but it is very melodic and I think it’s aesthetically pleasing to most Western listeners.

Concerts in the Barbara B. Smith World Music Series continue on the last Sunday of each month, all at 3 p.m. EST, starting in March. Upcoming guest artists include:

The concert series is generously funded by, and part of, the Barbara B. Smith World Music Series. These performances will be livestreamed at: https://www.esm.rochester.edu/live/