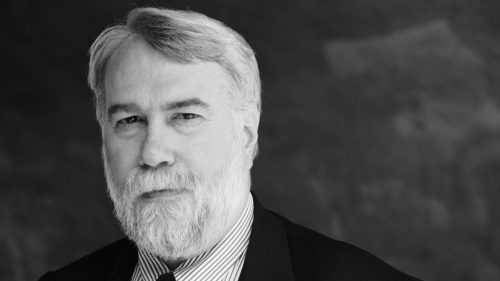 Christopher Rouse, a Pulitzer Prize-winning composer who taught at Eastman from 1981 to 2002, died on Saturday, September 21 in Baltimore of complications from kidney cancer.

“Christopher Rouse was one of the world’s foremost composers of the last half-century,” says Jamal Rossi, the Joan and Martin Messinger Dean of the Eastman School of Music.  “With his passing he leaves behind a remarkable catalog of compositions, ranging from symphonic to chamber and vocal works—many of which utilized cross-disciplinary influences—as well as a rich legacy of generations of students who benefited from his skill, wisdom, and inspiration.  Christopher will always be remembered with great fondness and respect here at Eastman.”

Christopher Chapman Rouse III began composing at age seven, and earned a bachelor’s degree at Oberlin Conservatory. He studied with George Crumb in Philadelphia and with Karel Husa at Cornell University. Rouse’s first significant commission came from Boston Musica Viva in 1982 for Rotae Passionis. His colorful, emotionally visceral music has been performed and recorded by major orchestras worldwide, and such soloists as Sharon Isbin and Yo-Yo Ma.

Rouse won the 1993 Pulitzer Prize for his Trombone Concerto, introduced by Joseph Alessi with the New York Philharmonic. He also won the Kennedy Center Friedheim Award for his Symphony No. 1, and three Grammy Awards — two for his Cello Concerto and another for his Guitar Concerto. His final work, Symphony No. 6, will receive its premiere October 18 with the Cincinnati Symphony.

In the words of David Liptak, Professor of Composition and chair of Eastman’s composition department, “Christopher Rouse was one of the best of American composers.  He was especially known for his orchestral music, which included six symphonies and a number of concertos.  His work was layered with references and connections to a wide array of musical precedents and influences, ranging from the monumental Romantic music of the 19th century to John Bonham, drummer with Led Zeppelin.

“He knew music literature as extensively and completely as anyone, and this was on full display with his teaching of composition and orchestration to students at Eastman.  His private students included some of our most prominent graduates, including Kevin Puts and Aaron Travers, and his influence was wide and deep. “

Besides teaching at Eastman for more than two decades, for over 20 years Rouse taught at The Juilliard School, and he was the Distinguished Composer-in-Residence at the Peabody Institute. He was the Baltimore Symphony Orchestra’s Composer in Residence in 1986 and New Music Adviser from 1989 to 2000, and the New York Philharmonic Composer in Residence from 2012 to 2015.