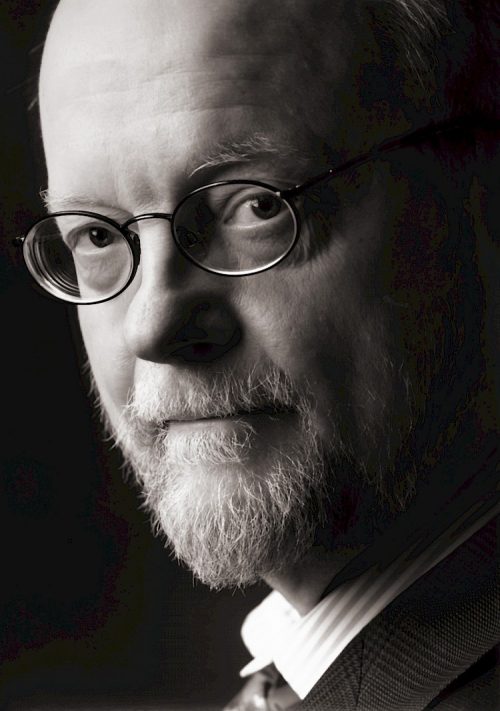 Eastman welcomes one of the world’s leading composers, Charles Wuorinen, as this year’s Howard Hanson Visiting Professor of Composition. Wuorinen will be in residency at Eastman from Monday, November 12 through Friday, November 16. His visit will culminate in a concert celebrating Wuorinen’s 80th birthday and featuring his compositions, on November 16, 7:30 p.m. in Kilbourn Hall at Eastman Theatre, with Eastman’s Musica Nova, conducted by Brad Lubman and Edo Frenkel.

Wuorinen’s residency also includes a master class with the composition department, a piano recital of compositions dedicated in his honor, a Composition Department Symposium, and a Music Theory Department Colloquium.

Robert Morris, professor of composition at Eastman, shares, “We are very happy to celebrate Charles Wuorinen’s 80th birthday at Eastman, where he will be honored as a Howard Hanson Visiting Professor. He is a master musician, among the most distinguished and prolific of American composers. His music continues and elaborates the musical traditions of 20th-century European contemporary music as represented by Stravinsky and Schoenberg, and yet is American in all the best senses of what ‘American’ implies.”

Eastman Associate Professor of Conducting and Ensembles Brad Lubman has known Wuorinen for at least thirty years, conducting his first Wuorinen piece in 1985 as a student himself. “When Wuorinen was first gaining recognition in the 1960s and ‘70s, he was considered by many to be a triple threat: not only a brilliant composer, but a highly skilled pianist and conductor. He was also a very important figure for music students in the late ‘70s and early ‘80s because in 1962, he founded The Group for Contemporary Music. The people in that ensemble set a standard of excellence, advocating for the importance of playing new music.” Professor Lubman also noted that when Stravinsky passed away, his widow was in search of a composer to whom she could give Stravinsky’s last sketches and commission a piece. Wuorinen was the composer honored with this commission, composing A Reliquary for Stravinsky in 1975.

“Musica Nova will be presenting pieces from three decades: Arabia Felix from the 1970s, New York Notes from the 1980s, and The River of Light from the late ‘90s. “What is striking about Arabia Felix is that it starts out in what sounds like a ‘serialized’ piece, and as the piece goes on it eventually coalesces into two melodic lines and ends in melodic unison – which in 1973 was completely unheard of unless you were a minimalist. In the circles in which Charles went, you would never write something that was melodic,” says Lubman. “And in a similar fashion, coming from a composer who wrote such hard-core modernist vigorous new music, New York Notes – to those of us who were following the likes of Wuorinen, Boulez, and Carter – almost seems like it was neoclassic and tonal. It’s very clever, because it’s not a tonal piece. It’s almost as if he combined certain virtues of music from Stravinsky’s late period with Stravinsky’s earlier periods. It’s very well done.” 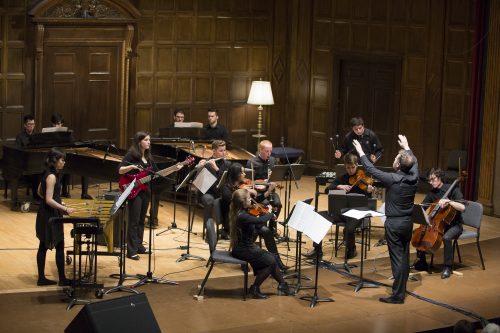 Wuorinen’s visit to Eastman is a rare opportunity for students to connect with a living composer and his music, in a way that is no longer possible with the idolized composers of the past. In the words of Professor Lubman, “the idea of new music brings it more in alignment with the idea of old famous music, because then hopefully one will start to view older music as if it’s new music, and new music as if it’s older music.”

Full list of events honoring Charles Wuorinen during his residency:

Coordinated with the journal Perspectives of New Music, set to publish a Festschrift for Wuorinen including scholarly articles on his music and compositions in his honor.
*performance will be live-streamed: https://www.esm.rochester.edu/live/

Friday, November 16: Theory Department Colloquium
3:30-5 p.m., ESM 305
Two of the eight articles that will be published in the Festschrift, read by the authors, will be presented. Featuring works by Anton Vishio of William Patterson University, and Daphne Leong, from the University of Colorado at Boulder (a PhD graduate of the Eastman School).

*Performance will be live-streamed: https://www.esm.rochester.edu/live/