Drummers at Heart: Eastman Alumni Prepare for the Percussion Picnic 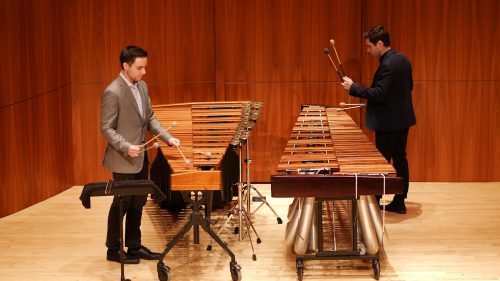 A performance filled with electric energy, fantastic friends, and passionate percussion sounds like the perfect way to spend a summer evening. Kyle Peters and Cameron Leach, percussionists and Eastman alumni, bring together the Rochester community in a unique percussion experience that aims to spark interest in an exciting and growing field of music. Summer @ Eastman presents “Percussion Picnic: A Little Bit of Everything,” Tuesday, July 17, at 7:30 p.m. in Hatch Hall.

The goal of the joint performance between Peters and Leach is not only to create a percussive experience that involves an eclectic mix of works, but to include everybody in the audience in that experience as well.

Peters and Leach both attended the Eastman School of Music, overlapping for one year during which they appeared in numerous performances together and studied under Professor Michael Burritt. Before their Eastman education, the two began their musical careers at separate undergraduate schools.

Kyle Peters attended SUNY Potsdam’s Crane School of Music, earning a Bachelor of Music in Music Education. During his time there, Peters established his love for teaching through instructing private students and leading numerous organizations.

Once he completed his undergraduate work, Peters joined the students at Eastman to achieve his Master of Music in Performance and Literature. Awarded the prestigious Performer’s Certificate, Kyle recalled that what drew him to Eastman was Michael Burritt, Professor of Percussion and Chair of the Woodwinds, Brass, and Percussion Department. “I worked with him [Michael Burritt] my sophomore year and I really liked his personality and his teaching style, he’s one of the best.”

He attended the Percussive Arts Society International Convention (PASIC) and, from there, discovered his gateway to Eastman. Recommended to him by a professor, he continued on to Eastman and was astonished by the accomplished faculty, staff, and students attending the university. “Once I got there I did my research and realized, wow, this is a big deal!” Leach received his Master of Music in Performance and Literature and was awarded the Performer’s Certificate by the school.

Peters, now a percussion instructor at the Eastman Community Music School (ECMS), and Leach, Adjunct Professor of Percussion at Kent State University, have been able to continue to perform and teach percussion post-graduation. Both are assured that the experiences they’ve had coaching and instructing students have shaped them as teachers and performers.

After finishing up his first year at ECMS, Peters noted that the work he does with the talented students who attend the school is very inspiring. “I’ve learned a lot from them [the students] and I’ve learned a lot about myself as a teacher. I just try to inspire my students the way I was inspired growing up by my own teachers. I’m excited to continue to grow and to see the growth of all the students; to get to know them and for them to get to know me, it’s such a positive experience.”

Leach, who teaches private lessons at Kent State, finds that a valuable skill he has acquired as a teacher is self-awareness. “You understand more and more how to try different methods quickly and how to self-evaluate….As a performer I think it helps me because I know tendencies of things to look out for and I can fight those tendencies before they happen.”

In the upcoming performance, the duo hopes to showcase a taste of everything you can get in percussion, including classical transcriptions, electronic pieces, solos works, and even a few new pieces.

“We wanted to feature a wide range of composers and, of course, we wanted to feature Michael Burritt, who is our teacher. We’re playing a new piece of his which is called Sweet Dreams and Time Machines, it’s a lot of fun,” Peters mentioned.

The performance seeks to provide a percussion experience for a general audience. “People come to percussion performances with an unclear idea of what it is,” Leach notes. “Being entertaining and giving them a lot of entry points as an audience to access what it is we’re doing is important….It’s trying to find that balance between entertainment, virtuosity, musicality, programming and audience engagement.”

With the intention of providing a wide variety of percussive entertainment throughout the evening, the performance also illustrates Peters and Leach’s individual skills. “Coming together and featuring who we are individually and also as a duo, that’s something we wanted to bring across in the concert,” Peters says.

Peters and Leach enjoy playing together and are looking forward to showcasing their talents in the upcoming performance. The two hope that listeners are able to feel their exuberant energy and join in on it from their seats in the audience.

Peters concludes, “It’s really to bring a performance that involves everything we do in our craft but at a very high level so that the audience can just sit back and enjoy.”

Summer @ Eastman presents “Percussion Picnic: A Little Bit of Everything” this Tuesday, July 17, at 7:30 p.m. in Hatch Hall. For information about the show and ordering tickets, click here.