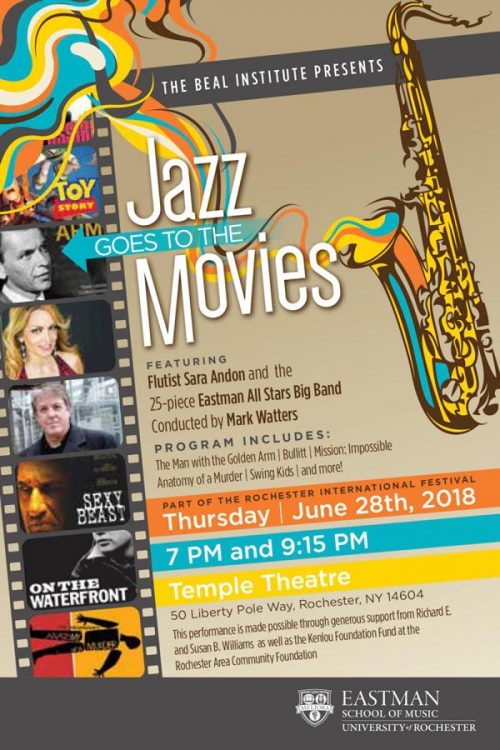 You can enjoy a “Jazz at the Movies” concert starring the 25-piece Eastman All Stars Big Band featuring renowned flutist, Sara Andon conducted by Mark Watters, TONIGHT, Thursday, June 28, at Temple Theater at 7 p.m. and 9:15 p.m.

Has it really been a year since you started with the Beal Institute?! Can you recap your first year for me?

It has! We just completed our first academic school year! It’s been a flurry of meetings, and introductions, and a whirlwind of future ideas, endeavors, and projects. It’s been very exciting! We’re setting up relations with RIT, the Eastman Museum, and various gaming developers in the area.

And the academics at Eastman have just been going fabulously. I had six wonderful students who are incredibly talented, and we did a total of nine recording sessions with various groups, made up of all Eastman students. Students got a chance to write in a huge variety of styles, and challenges. They really came through. The purpose is to build a real portfolio that they can use to go out and take the next step.

It must be challenging doing the first year of any program, figuring things out on the go. How did you and your students respond to that?

Well, I included the students in large part about what they wanted. A group this small – only six – it allows me to tailor the curriculum to fit their strengths and weaknesses. We have some students who are really gifted in the computer technology realm, we have some who are really gifted in orchestration, and more traditional areas, so we’re able to handpick the challenges and the assignments to fit their needs. This is what I hope to do in the future. The program will always be limited to six per year, so we’ll never have more than twelve in the program, which is essential for something like this; we want it to be exclusive.

The students were wonderful with offering feedback; they’re very up on things, and it was great to get their feedback. I think we avoided a big challenge in that the administration has been wonderful in their support of the program: buying new equipment, new software, working with the faculty to have access to the players we need at the school. All of that would not have been possible without the support of Dean Rossi and Associate Dean Rolf. They were tremendous in making sure that whatever I needed I got.

This cooperation between Eastman and other institutions when it came to
scoring/composition/new media was absent since Ray Wright was at Eastman… Why was it
important to bring it back?

The music part is just one aspect of it. The students have to have experience scoring projects where they’re allowed to work with the filmmakers. It’s one thing for me to have them write a scene from some well-known TV show, and they’re rescoring the scene, but they have me there to (guide them)… That’s what we do the first year. The second year they have to sit at a table with a filmmaker who may not know how to describe what they want musically, but part of the job of being a composer is bringing your knowledge and skills that are specific to music to a very collaborative art form. It’s a very important skill, and it can’t be duplicated any other way.

Our relationship with RIT is essential because there is no film school at UR, and RIT is so highly regarded in their animation school, their film school, and their video game development school… We’re looking for to close relationships with the school and the faculty.

The other thing we’re going to do this year is work with the Eastman Museum. They have a wonderful archive of older films – even silent films – that do not have scores to them, so it’s a great, great opportunity for the students to be able to do something original, and not have to mimic another composer’s style, which is still an important part of what we have to do… Because it’s a way for a filmmaker to describe in non-musical terms what they’re looking for.

Tell us about “Jazz at the Movies” featuring flutist Sara Andon.

One of the first things I was told when I got this job was: “You need to come back and go to the XRIJF.” My wife and I actually made a separate trip back to Rochester to take in a few days of it (last year). I was so blown away with how it takes over the city; it’s such a huge event. And it’s so cool that Eastman is at ground zero, it’s right there at the center of it. It was so exciting.

I immediately told Dean Rossi that I would love to do a “jazz at the movies” concert, and we immediately had a meeting with John Nugent, and John could not have been more excited about it. Right there he committed a date, and a venue to me, and said “Do whatever you want to do.” It was great fun.

I’ve been working with a lot of people who are in the “live to picture” era, and I’ve done some of it myself, but we had to get some of the great jazz scores … Man with the Golden Arm, Walk On the Wild Side, Mission Impossible, composers like Leonard Bernstein and Henry Mancini. These are giants in this world, and we’ve put together a great program.

Will the movies be playing behind and along with the orchestra?

No, I didn’t want to take that technical challenge on. What orchestras are doing now is complete movies to picture, and that would be great to do But we’re doing this with a big band – so no strings – so we were limited to do the scores that we were written for that group. So we’re going to play scenes and images, and we’re editing together video packages to play without sound, while we play the music, just to give the audience a visual sense of the movie. In some cases, we’re doing adaptions of the music. We’re doing the main titles of Man with a Golden Arm, Walk on the Wild Side, Mission Impossible, and those are great to play along with. But there’s not going to be a click track, no headphones. I did a new arrangement of a beautiful tune by Henry Mancini, and I’m opening it up; they’re will be some featured solos, not only from Sara, but others in the band. It’s a very lush, romantic, and sensual song, and we’re going to play images where it was used in these movies.