Bringing that Energy Back: Cellist Guy Johnston Returns to Eastman 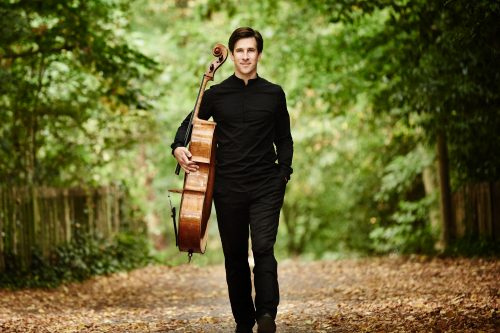 The incoming and current cello classes are gaining an additional valued member to our faculty, as Guy Johnston joins Eastman this fall. Born into a musical family, Guy started his musical journey as a chorister in the world-renowned choir of King’s College, Cambridge. His early successes included BBC Young Musician of the Year, the Guilhemina Suggia Gift, the Shell London Symphony Orchestra Gerald MacDonald Award and receiving a Classical Brit Award at the Royal Albert Hall. Johnston has toured extensively with top orchestras around the world, including Principal Guest Cello of the Australian Chamber Orchestra and Guest Principal Cello of the Royal Concertgebouw Orchestra in Amsterdam, while also continuing to perform the core cello concerti with orchestras such as City of Birmingham Symphony Orchestra, the Royal Northern Sinfonia, Royal Philharmonic Orchestra, and the Britten Sinfonia, among others. Recent season highlights include the Walton Concerto with the RTÉ National Symphony Orchestras, Tchaikovsky Rococo Variations with the BBC Philharmonic, Dvoràk Concerto with the NHK Symphony Orchestra in Japan, and a new Cello Concerto with the BBC Symphony Orchestra at the BBC Proms. Johnston comes back to Eastman having been Professor of Cello at the Royal Academy of Music, where he was recently awarded an Honorary ARAM, and is a board member of the Pierre Fournier Award for young cellists.

It’s been fifteen years since cellist Guy Johnston graduated from Eastman, and returning full time this fall as a faculty member – Associate Professor of Cello — has brought up memories and excitement about this next chapter in his musical journey.

Johnston, born in England in 1981, first came to the United States at the age of 16, when he was invited to perform at Tanglewood, and the following year attended the Bowdoin Summer Music Festival. Johnston chose to study at Eastman having heard about his mentor, and now colleague, Steven Doane on his previous trips to the States. It soon became clear that Eastman was the perfect place to study, not least because of its reputation as one of the leading institutions in the States. He also has other connections here, having studied privately on a few occasions with the legendary cellist of the Beaux Art Trio, the late Bernard Greenhouse.

Studying abroad provided an entirely unique music education. “I felt I had an opportunity to have a focus here at Eastman. It was a time to get away and focus deeply on my playing as well as academic understanding of music. I also greatly enjoyed the humanities courses.” He adds, “The lovely thing about America to me is that I got a different perspective on things. This sense of discovery and adventure – hearing some of the greats live, like Joshua Bell, Itzhak Perlman, Yo-Yo Ma – really inspired and shaped my learning.”

As an Eastman master’s student, Johnston was surrounded by like-minded students. “That crop of cellists – we all had a similar approach whilst maintaining our own individual voice on the instrument. We were all taught by the same professor, listening and supporting each other each week in studio class. We learnt from each other as much as from our professor, which was always encouraged. To think for ourselves.”

Johnston reflected on his first year as a freshman: how they all played a cycle of quartets by Bartók; listening to the Ying Quartet playing on the Eastman-Ranlet chamber music series; and how getting to know his fellow students as true colleagues shaped his experience. “There is a unique sense of community and camaraderie here at Eastman. Everything is very connected and engaging.”

Johnston continued, “You always felt you were being nurtured; you were never left behind.” He laughed and added, “I had great fun socially as well.” Johnston recalled falling in love for the first time at Eastman, and how he couldn’t believe fifteen years have passed since being a student, during which time he has been living the dream performing and teaching around the world.

Johnston was here a few months ago, taking part in auditions for incoming students, eager to fill the next class of cellists. “To be returning and collaborating with past mentors and professors — it’s sinking in what an opportunity it is. But also, I feel a great responsibility to the students to impart what I’ve learned. I want them to grow and develop and think for themselves as artists.” Johnston’s hope for incoming students is that they will develop the same sense of community and support with their peers and faculty. He recalls, “I remember Steve Doane welcoming us, and feeling his warmth and spirit. The fact that he’s now a mentor and colleague is really a dream.”

Johnston plans to keep very busy while he’s here. His plans include keeping up his solo and chamber performances, as he’s never toured or performed in the States. He’s looking forward to working with old and new colleagues, recruiting students at various musical institutions and bringing the influences and energy back to Eastman. He also wishes to continue to connect with his roots back in the United Kingdom where he will continue to be a Guest Professor at the Royal Academy of Music and direct his festival at the historic Hatfield House, where Elizabeth I was told she was to be made Queen. Johnston also hopes to encourage more exchanges for Eastman faculty members and students with the Royal Academy of Music in London.

For Johnston, Eastman as an institution provided him with a perfect balance of academic and practical skills. “Eastman has given me an incredible work ethic. Everything I’ve gone on and done is largely thanks to what I’ve picked up here. It’s a happy full circle to be returning for this new chapter in my musical life. I owe a great deal to Eastman and am greatly looking forward to the new year ahead.”