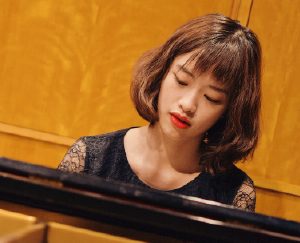 Eastman School of Music student, composer, and collaborative pianist Yucong “Zoe” Wang is debuting her newest composition, a Violin Concerto, with the Eastman School Symphony Orchestra tonight at 8 p.m. in Kodak Hall at Eastman Theatre. Wang, 24, is no stranger to having her work played. In 2013, she entered the Eastman School of Music to pursue a B.M. in composition. Wang’s compositions have been performed at many concerts in Shanghai, at the Eastman School of Music, the George Eastman House, the Strong National Museum, and the University of Oregon. In 2016, she collaborated with the Deviant Septet, and her piece, The Ecstasy of Six Persian Poems, was performed by the septet at the Warren and Patricia Benson Forum on Creativity. In the same year, she was commissioned to write a piece for the 2016 Toy Hall of Fame at the Strong National Museum. Her past composition awards include second prize in the Confucius Award Composition Competition (2009) for her Chinese instrumental trio, Yi, and first prize in the Young Promise Composition Competition (2011) for her mixed quintet, The Reverse of 12 Hours. She also received Eastman’s Belle Gitelman Award in 2016 for her chamber pieces, Five Wright Songs and The Ecstasy of Six Persian Poems. (Some information taken from americancomposers.org)

Zoe Wang is a native of China – and lived near Shanghai during some of her musically informative years – and began piano lessons at the age of six.

“I wasn’t always doing the assignments she gave to me,” Wang said. “I would improvise a lot on the piano. She made the suggestion to also find a composition teacher.”

At the ripe old age of eleven, Wang began her first composition lessons when she moved a little closer to “the big city.” She continued her music and composition training into middle school and high school, and was the top-ranked student at the Shanghai Conservatory of Music.

“When I was taking lessons very young, playing Chopin and Bach, I never thought ‘I want to write the way they do,’” Wang explained. “There was this one time when I started to improvise right after hearing Debussy … I thought the harmony and the sound of the orchestra was so different from the ‘very classical’ repertoire. I wanted to compose like him … to be innovative and keep the mood of the traditional styles.” Wang stated that both Impressionism and Neoclassicism are her two biggest influences.

After spending another year in China, she began to prepare herself for studying abroad. Out of the many schools she applied to, she decided on Eastman. In addition to having friends at the school who recommended the school to her, she was blown away at her audition; her only visit to the school before classes started.

“Everyone at Eastman is super-nice,” Wang said exuberantly. It would be a phrase she repeated multiple times throughout her interview, never losing her enthusiasm. In addition to the overwhelming “niceness” at Eastman, she was drawn to the school because she felt that the composition department would allow her the freedom and support to compose the kind of music that she wanted to compose. She researched the music of her prospective composition teachers, and found that she liked it, and it would be a good match.

“The teachers have been really supportive (of) me,” Wang said.

Indicative of that support, Wang discussed that being at Eastman and working with her teachers has allowed her to grow in many ways. In particular, it was finding her own voice as a composer, and learning the art of orchestration, and moving on from just composing on the piano.

She described her style as eclectic at first; early on, even unwittingly, she would “cut and paste” sounds, harmonies, and melodies from a wide variety of sources into her compositions. Each piece individually sounded like one thing or the other, there was no unified sound from one piece to the next.

“My work was very complex,” Wang said. “The textures were too dense and difficult to play… I started to realize, after working with my professors, how to simplify everything and how better to connect my score with the sound that I imagine.

“Ricardo Zohn-Muldoon worked with me to develop my own style,” Wang said. “My style is part simple, but also Impressionistic, plus a lot of jazz chords.” Although she’s never played jazz or taken lessons formally – she admits that she can play jazz chords, but “the rhythm is really hard for (her)” – jazz chord structures have influenced her greatly.

Fast forward to her final year as a composition undergrad, when she began work on her violin concerto. To tackle her second orchestra piece, she had to tackle applying her harmonic sense to the huge sound palette of an orchestra, taking what she learned from her very first orchestration class, and her recent time working with the American Composers’ Orchestra; whether it was something simple like the difference between a vibraphone and a marimba, or combining different parts of the orchestration to achieve a new sound.

“The idea to do a violin concerto came to me very (spontaneously),” Wang said. It was her final year, and she wanted to present an orchestra reading. “Working as a collaborative pianist… My partner and I were working on a violin concerto, and I thought, ‘why don’t I write my own concerto?’”

The first movement of Wang’s concerto will lead off the concert, which continues with Robert Schumann’s Conzertstück for four horns, Op. 86, and Symphony No. 4, Op. 120. The fifteen-minute movement will feature Wendy Toh on violin, and assistant conductor Garrett Wellenstein.

“The whole orchestra has put in a huge amount of work into my piece to make it happen,” Wang said. “I am very grateful.”