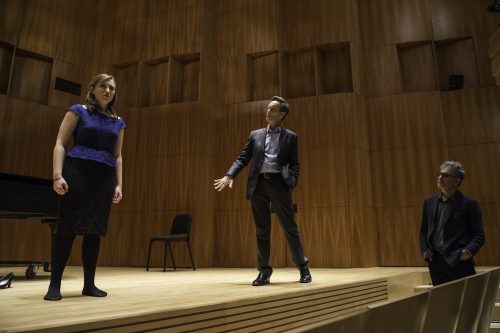 American composer Jake Heggie [C] and librettist Gene Scheer [R] (BM 81 MM 82) lead a master class with Eastman students including mezzo soprano Kaley Harman [L] in Hatch Hall at UR’s Eastman School of Music January 19, 2017. The students will be performing their opera “Out of Darkness” and a collection of vocal works made into a program titled “Into the Fire” next month. // photo by J. Adam Fenster / University of Rochester

On Thursday, January 19, students from the Eastman Voice Department were selected to perform songs composed by Jake Heggie for an unforgettable Masterclass. Gene Scheer, an Eastman alumnus and current lyricist, was also present to offer insight for the performers.

Many of the performers were asked how the text resonates with them personally. Both Heggie and Scheer sought creative tactics to help the performers find their voice. Cassidy Thompson, a current senior vocal performance major, sang a stunning rendition of “My Father’s Eyes”. Heggie asked her to pick a friend from the audience and perform the piece to him. The result was moving, and Heggie proved to the audience the power that music can have.

Kat Galagaza, also a senior, did the same for her piece from the cycle Camille Claudel and produced a similar effect. Together, the composer-librettist duo offered more students helpful advice, particularly focusing on movement while performing. Adam Wells and Mark Hosseini, both first year masters students, gave beautiful performances of Heggie’s songs. The composer focused on the minute nuances of his piece and encouraged the singers to find their own unique approach while maintaining the original intent. Chad Somers, a current DMA voice candidate, performed a beautiful piece from Heggie’s new opera Out of Darkness. The opera is opening here at Eastman next Thursday, and you will want to catch a performance of it! (Check here for more information.) 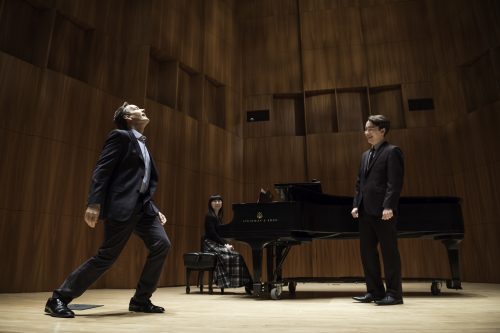 American composer Jake Heggie [L] and librettist Gene Scheer [not pictured](BM 81 MM 82) lead a master class with Eastman students including baritone Adam Wells and pianist Ting Hong in Hatch Hall at UR’s Eastman School of Music January 19, 2017. The students will be performing their opera “Out of Darkness” and a collection of vocal works made into a program titled “Into the Fire” next month. // photo by J. Adam Fenster / University of Rochester

The master class focused on helping students find a unique approach to songs. The composer and librettist enriched the experience by providing the singers with insight from Heggie’s thought process when he initially composed the pieces. Offering valuable explanations for some nuances within his songs helped the students understand effective ways to communicate the text. Both Heggie and Scheer relayed the possible pitfalls within their music and how young singers can overcome them.

It was incredible to see two insightful minds offer students advice in a calm environment while the singers were challenged and asked to do some extraordinary tactics. Some performers, like senior Sara DeFranco, were asked to walk around in the audience and sing while others were asked to sing or speak the text to a friend. Both situations created powerful moments that allowed the young singers to find their own fresh approach to art song.

Eastman Opera Theatre’s performances of Jake Heggie and Gene Scheer’s Out of Darkness and Into the Fire are as follows: