Putting Bach Together: Eastman Student Singers on Preparing Bach’s Mass in B Minor and Christmas Oratorio 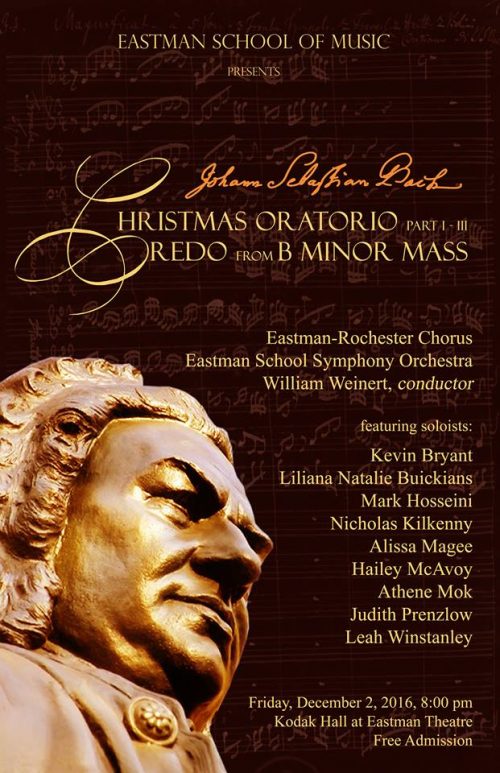 by Kameron Ghanavati
‘
The upcoming holiday season brings an abundance of music to Eastman. This year, Dr. William Weinert will present a double bill featuring two of J.S. Bach’s highly revered pieces: the “Credo” from the Mass in B minor (1749) and Parts 1, 2, and 3 from the Christmas Oratorio (1734).

Both pieces include ten student soloists, who auditioned earlier in the semester, and are accompanied by student instrumentalists. I decided to reach out to some of the soloists and find out how they interpreted the piece and went about learning it. Bach certainly presents some challenges to musicians, and it seems each singer approached the work uniquely.

“I memorized the words before listening to any of the music. I always write the text in a note book, translate it, and memorize it by writing and speaking the text from the end to the beginning,” comments Kevin Bryant, a first-year graduate voice student.

“I spent a lot of time at the piano. Not just playing my vocal line, but also the other lines that interact with mine,” wrote Mark Hosseini, who is also a first-year graduate voice student.

When it came time to begin learning the piece, Anna Bekker brought the piece to her private voice teacher and vocal coach Benton Hess, who “both shared valuable insight.” Mark Hosseini was able to gain some insight with soprano Ellen Hargis, who visits Eastman and offers students vocal coachings specializing in early music. The voice faculty also helped their respective students greatly when learning the arias and recitatives within Bach’s works.

Some student soloists also found it helpful to solicit recordings for inspiration and ideas. Athene Mok, a DMA voice student and “Credo” soloist, wrote, “for baroque music, I usually listen to Philippe Herreweghe, Nikolaus Harnoncourt, and Gardiner’s versions”. Kevin decided to listen to as few recordings as possible, but certainly enjoys the recordings of Fritz Wunderlich. Mark found a recording of the Christmas Oratorio from King’s College, Cambridge featuring soloists Elly Ameling, Dietrich Fischer-Diskeau, Janet Baker, and Robert Tear to be particularly helpful. His favorite piece? “Et in spiritum sanctum” from the Mass in B minor, because of the mystical nature and the vocal melody that is “colorful, and sits in a high, floaty tessitura”.

But what about technique? Athene pointed out to me that the early 18th-century tuning system was in fact different from ours. The temperament used back in Bach’s time was A=415Hz. Today, we use A=440Hz. [i.e. today’s pitch sounds about a half-step higher.] Nicholas Kilkenny, a DMA student, discussed a challenge that he feels makes Bach more difficult to sing: the tessitura can often be high, especially for a baritone-bass. This relates directly to the change in temperament. Further, Nicholas mentioned that Bach is extremely specific and writes out every ornament, leaving little room for improvisation from the singer. He also cautions that “young singers need to be careful not to restrict their vocal technique through straight tone [little or no vibrato] while performing these works”. However, it seems that all of the soloists in this particular performance have acquired a solid understanding of both vocal technique and style and will certainly bring unique interpretations to both works.