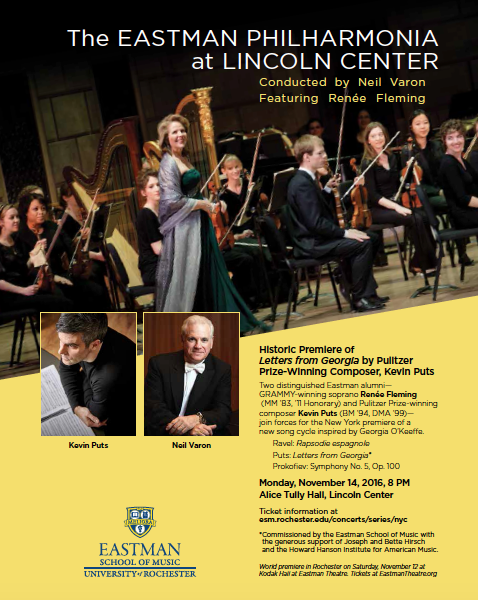 The poster for the Alice Tully Hall performance on November 14, 2016.

Tomorrow night the Eastman Philharmonia, under Neil Varon, gives the world premiere of Kevin Puts’ Letters from Georgia in Kodak Hall, with soprano Renee Fleming as the soloist. The following Monday, all of them will travel to New York to repeat the concert in Lincoln Center’s Alice Tully Hall. We asked three students performing in the Philharmonia to write blog posts about the experience of rehearsing and performing this new piece and the excitement of the orchestra’s first New York performance in many years. The first post is from Willa Finck, the orchestra’s concertmaster for these concerts.

I am a violinist currently in the midst of my third year of undergraduate studies here at the Eastman School, pursuing a Bachelors of Music in violin performance as well as a Musical Arts Major focusing on Southern Appalachian folk music. I was raised in Boone, North Carolina, a quiet town tucked away in the mountains and (possibly) known for being the home of Appalachian State University. My sister and I started Suzuki lessons when I was just shy of three years old and from there I continued on what I suppose is the fairly standard path of lessons, orchestral and chamber music playing, and summer festivals, before arriving at Eastman.

This Saturday, November 12, and Monday the 14th, Eastman Philharmonia will be performing a program of 20th and 21st century works, including Ravel’s Rapsodie espagnole, Prokofiev’s Symphony No. 5, and Kevin Puts’ Letters From Georgia. This world premiere of Dr. Puts’ piece will of course be sung by Eastman alumnus and world-renowned artist Renee Fleming. As if I needed the extra excitement, Maestro Neil Varon placed his trust in me (something I will hopefully live up to) and appointed me concertmaster for this performance. On Wednesday of this week we had our first rehearsal with Ms. Fleming and Dr. Puts and from my front row seat I watched and listened to Ms. Fleming in amazement. The purity and inflection with which she sings is breathtaking and I am very much looking forward to hearing her performance on Saturday night, because I expect she has been holding back in our rehearsals thus far! As to the piece itself, it is a thoroughly enchanting piece of music.

(A brief disclaimer before I describe the piece: as it is obviously not a publicly published piece and the libretto is excerpts from Georgia O’Keeffe’s letters, I am relying on the text I have picked out when I am not too concentrated on my own playing, which may not be entirely accurate.)

The first movement traverses a range of colors and emotions, going from powerful to adventurous to awestruck. The second movement, entitled “Violin,” describes a young girl learning to play the violin and the awful sounds she makes when she plays. Which means that I get to have fun playing a very satisfyingly loud and dissonant solo. The most nerve-wracking section of the piece is the opening of the third movement, which begins with a terrifyingly exposed first violin melody line. I’m sure this sentiment is shared by many others in the orchestra during this movement as well.

The fourth movement, entitled “Friends,” is a septet of only two bassoonists, two clarinetists, a harpist, Ms. Fleming, and myself. It is a brutal yet beautiful intonation exercise for the wind players as I quietly skate along with a winding sixteenth note line. The movement is not as happy-go-lucky as the title may suggest, but is rather a more thoughtful take on the meaning of the word. Kevin Puts ends Letters From Georgia with an introspectively ethereal reflection on the beauty of the world around us, an atmosphere that is enhanced by Renee Fleming’s graceful artistry.

I think I can speak for the whole orchestra in that we are all extremely excited and grateful for this opportunity to work with some of Eastman’s finest alumni. It inspires us all and gives us a glimpse of the world that many of us will hopefully be entering soon (perhaps sooner than we might like to think). I am confident that the Eastman Philharmonia will have fun and perform to the best of our abilities this Saturday and next Monday when we travel to Alice Tully Hall in NYC.