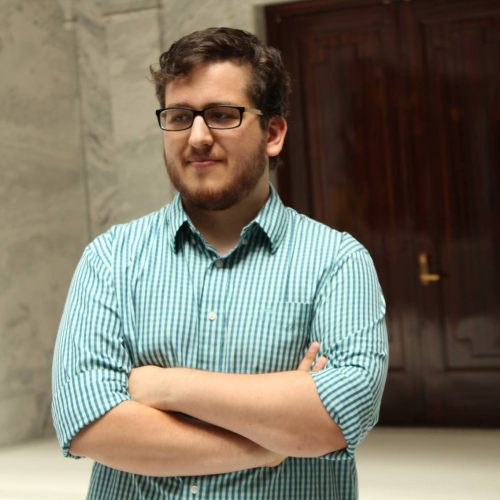 Eastman’s student-run new music group, OSSIA New Music, will present the first concert of its 20th season this Thursday, October 6, at 8 p.m. in Kilbourn Hall. This concert features an eclectic mix of pieces by many prominent living composers. Also featured on the concert is one of the winners of OSSIA’s student commission competition, in which Eastman students apply to have their works premiered by OSSIA during the concert season. On this concert, Eastman student and composer Nick Morandi will have his work Hyperion Songs performed for the first time. To learn a little bit more about this unique opportunity and some of the challenges associated with it, I spoke to Nick about the process of composing this piece and applying for the competition.

Can you tell us a little bit about yourself and what you do at Eastman?

I am a second-year PhD student in composition at Eastman. I am a graduate instructor of composition for non-majors, and also serve on the board of OSSIA as librarian. I am from Salt Lake City. I got my bachelor’s at the University of Utah and my master’s from Indiana University, both in music composition.

Your own piece of music is being performed on the upcoming OSSIA concert, can you talk a bit about what it was like applying for the commission?

Applying for the OSSIA commission was a very interesting process. I always find it difficult to talk about my own music, especially while the piece is in progress. So being forced to put those unsaid thoughts into words in order to describe the piece helped me figure out what I wanted to do with the rest of the piece and condense my vision for each movement more clearly. I grew to admire OSSIA’s mission last year as I attended their concerts and was inspired by their can-do, DIY spirit, and applying for this commission seemed like a great opportunity to get involved with a great organization.

What was your inspiration for the piece and could you explain the composition process?

My inspiration came while reading a book called Hyperion by Dan Simmons. A character in the book quotes poetry quite frequently, and they naturally shared a theme because the author had chosen them to fit the details of his plot. I found that I liked all of the texts and felt their rather dark and portentous shared theme was appropriate to the current global climate. I had wanted to write for solo voice for a long time, as it’s something I haven’t done since my undergraduate training, so this felt like a perfect opportunity. I landed on a song cycle with instruments because it felt like something momentous enough to withstand the weight of a commission from OSSIA, which has a long history of commissioning great works from Eastman students and putting on terrific concerts of incredibly diverse new music. The depth of color in the “Pierrot-plus-percussion” ensemble that I used for the piece also lent itself well to the depth of feeling in the texts. (A “Pierrot ensemble” is violin, cello, flute, clarinet, and piano – the instruments required to perform Arnold Schoenberg’s Pierrot Lunaire.).

I deliberately attempted to link the separate songs through the music, including motivic connections between movements, as well as linking them formally. The first three songs form a kind of narrative and formal whole, in a slow-fast-slow arrangement, while the last song has that same progression of tempos within itself. This structure came from my interpretation and ordering of the texts. I employed text-painting to enhance the text at certain key points. For example, at the words “rocking cradle” in the fourth song, the singer sings a simple lullaby-like melody in triplets to evoke the motion and emotion spelled out by the text.

Can you explain a little bit about what it’s like as a composer taking your music off the page, and working with musicians to present it for the first time?

I see my job as a composer as giving the performers as much information as clearly possible through the notation while still allowing them creative freedom to express themselves in performance. It’s always a wonderful thing coming to the first rehearsal and working with performers. There can be a sense around new music that everything has to be exactly as the composer wanted, especially if the composer is in the room. But I prefer to think of my works as living things, and I love to work with the musicians to find ways of performing the piece that may be better than what I originally had in mind. There are times when I know exactly what I want and ask the performers to do that, but there are just as many opportunities for the performers to be creative.

For more information on OSSIA New Music and its 20th anniversary celebration, visit their website.