CAFÉS, CROISSANTS, AND CONTEMPORARY MUSIC: AN EASTMAN SUMMER IN PARIS 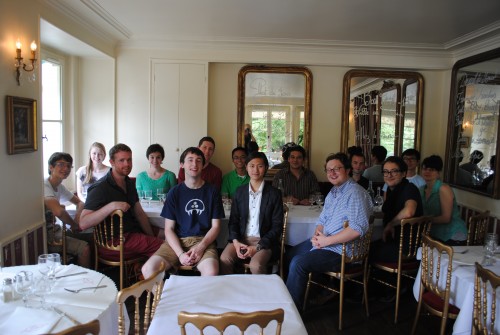 Contemporary music theory in Paris: the 2014 “Study Abroad in Paris” group with director Robert Hasegawa (back row, in striped shirt).

Paris vacations never really need justification, but if you’re seeking intellectual and musical validation for your next June trip, Summer@Eastman can help. Professor Robert Hasegawa, who taught music theory at Eastman from 2009-2012 and is currently an Assistant Professor at McGill University, has been bringing student groups to Paris for musical study trips since 2012. His Summer@Eastman institute, “Theory and Analysis of Contemporary Music: Study Abroad in Paris,” offers students a four-week immersion in contemporary music theory and performance practice at one of the world’s most celebrated new-music festivals. The class runs in parallel with ManiFeste, the renowned music festival produced in Paris each year by IRCAM (Institut de Recherche et Coordination Acoustique/Musique); Dr. Hasegawa specifically designs each year’s curriculum to feature the composers represented at the festival. Students meet as a class for the first two weeks to learn about the scheduled works, then participate as auditors in the IRCAM Academy for the final two weeks, attending public lectures, masterclasses, open rehearsals, films, and concerts. Collegiate and adult students of all musical disciplines are welcome to register; visit the program website at https://www.esm.rochester.edu/theory/paris/ for application details. Here, Dr. Hasegawa talks about the institute and its particular blend of geographical and musical exploration:

How did you get the idea to create this class? What inspired you? How do you create the curriculum each year?

When I first proposed the class in 2012, I knew that I wanted to find a way to get more involved with contemporary music performance and composition in France, and to introduce my students from the United States to this repertoire and the musical ideas behind it. I’d visited IRCAM before for short research projects at the Médiathèque and had some professional contacts there, but had never had a chance to catch the summer new music festival, ManiFeste. I was inspired in part by a summer study-abroad course in Vienna I took while I was in graduate school, led by Yale professor Allen Forte and focusing on the music of Arnold Schoenberg. During that summer, I heard a lot of performances by ensembles including Klangforum Wien, which really transformed my sense of what was musically possible and opened up new ways of thinking about music. I hope to share that transformation with my Paris students.

Each year, I put together a fresh curriculum based on the works programmed in the ManiFeste concert series, usually 15-20 concerts over the month of June. I have a few pieces that I teach almost every year because they work so well to introduce particular compositional concepts (Gérard Grisey’s Vortex temporum, Philippe Leroux’s Voi[Rex]), but all the other repertoire is drawn from the concert programs. This gives us all some familiarity with the music that we hear performed and also makes it possible for the performances to suggest new analytical insights. It takes a lot of work to redesign the course each summer, but it’s worth it: many of my own recent research projects (on George Benjamin, Philippe Hurel, and Jonathan Harvey) have been inspired by works I first got to know during the summer course.

What kinds of students enroll in the class? Do you generally see a certain “type” (theory specialists, or contemporary music fans), or is the group more diverse than you might expect? Has the class profile changed over the years?

I’ve been lucky to have very diverse and talented groups of students each year. The class has included composers, performers, and theorists/musicologists at all levels, from advanced undergraduates right up to PhD and DMA students. This year, more than half of the class are enrolled in doctoral programs, while the others are split between the master’s and bachelor’s levels. There are always some students with a very broad knowledge of new music and a lot of experience in composing and performing this repertoire, as well as others who have a spectacular classical background and are just getting acquainted with the music of the this century. It’s a delight to have students like this in the class, who are bringing a really refined musical sensibility to their encounter with a new repertoire and all kinds of new musical issues and questions.

What will be especially exciting about this year? Are you doing anything special to celebrate the program’s fifth anniversary?

This year’s festival will involve a terrific group of composers: the IRCAM Academy features Philippe Leroux, Rebecca Saunders, Mauro Lanza, and Beat Furrer, and there will also be performances of works by Salvatore Sciarrino, Brian Ferneyhough, Yan Maresz, and many others. I’m particularly excited to see and hear Leroux’s music in concert: he is not only a valued colleague at McGill but also one of my favorite contemporary composers. I am planning a lot of composer visits to our classroom, which is always exciting: getting to know these composers and hearing them talk about their work is a great way to better understand where their music comes from.

Looking back over the program’s history, do any concerts or events stand out as particularly memorable? What do your students remember most about the experience?

We’ve attended some amazing performances over the past four years: some particularly memorable ones were Georges Aperghis’s Luna Park, Philippe Leroux’s Quid sit musicus?, Philippe Hurel’s Tour à tour, and Pierre Boulez’s Répons (at the new Philharmonie de Paris!). There have also been some amazing theatrical works and solo recitals: I think especially of the solo piano recital by composer Thomas Adès and the percussion works performed by Steven Schick (who will be leading a percussion workshop at this year’s IRCAM Academy). One of the other highlights is hearing the composers and performers talk about their creative work at the Academy or in visits to our class. In general, there’s something unique about combining immersion in a new culture with so much exposure to contemporary music: the experience of getting accustomed to a new city and new ways of doing things creates a real openness to new artistic experiences as well.